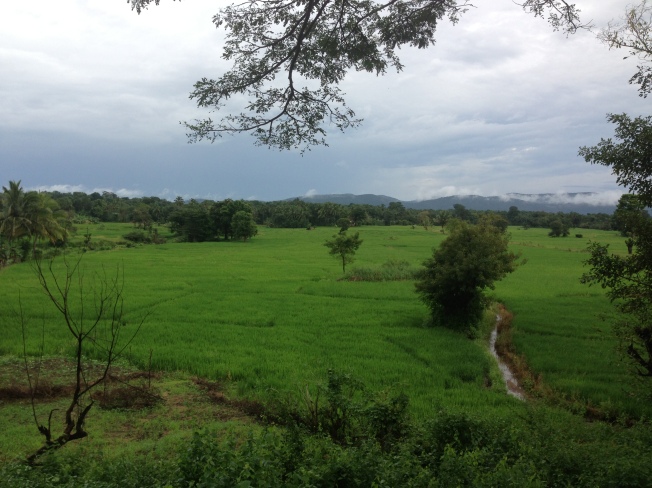 As I left Pollonaruwa it began to rain quite heavily and I joined a scooter driver taking shelter under a building. As happens endlessly I was then subjected to a barrage of questions.
‘Where are you going?’ is the Sri Lankan mantra that everyone asks. “Sigirya’ I replied. He suggested a ‘short cut’. Somewhat foolishly I followed his directions and began skirting a huge expanse of water. On and on I rode. The short cut became hours of  additional cycling as I followed a road that ran alongside a river flowing in the opposite direction. I stopped to pitch my tent before the light faded.
The sun shone the next day and had a delightful breakfast in a village store where men were playing a game of carom outside. Carom is similar to pool; uses counters instead of balls and the playing board has little pockets in the corners. 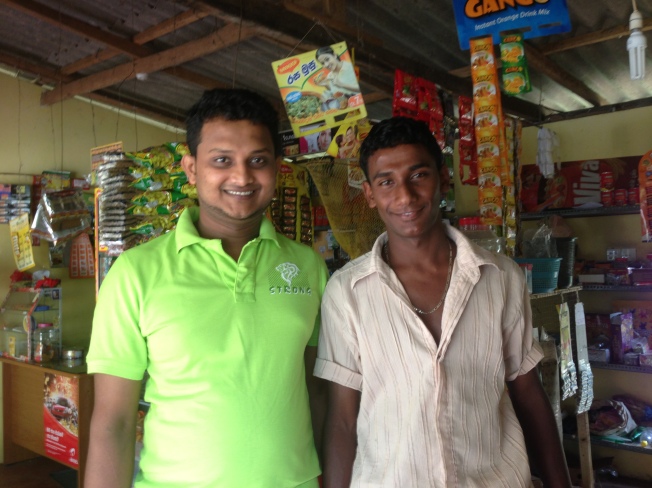 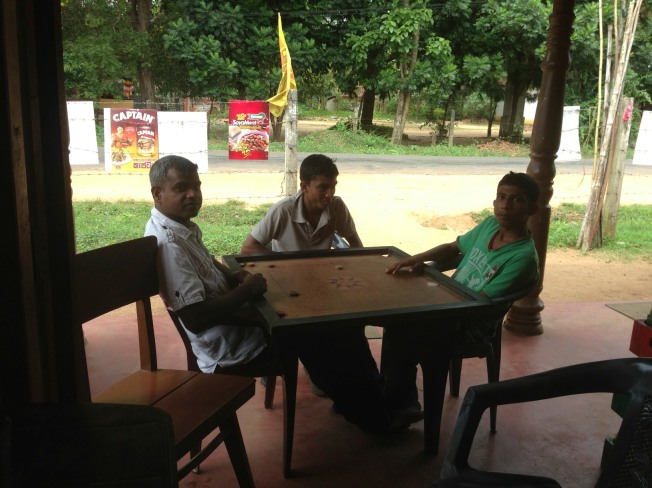 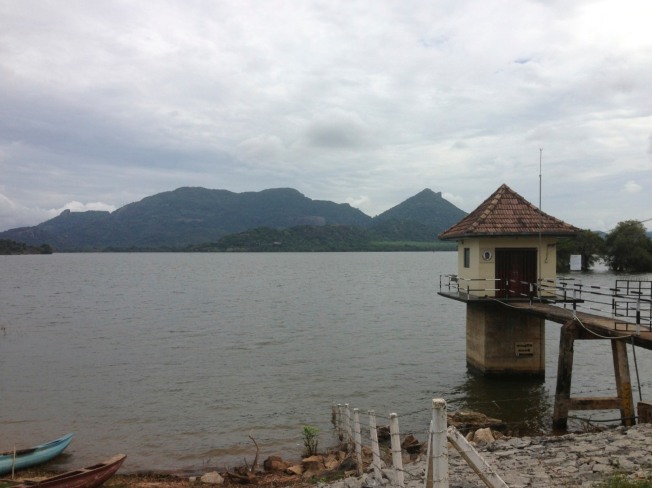 I finally found a good road which swung back towards Sigirya and its fabled rock fortress. I stopped to help some chaps push a truck out of a ditch. Apparently the driver had fallen asleep at the wheel and wandered off the country lane. A tractor arrived just after we had got it back on the road. 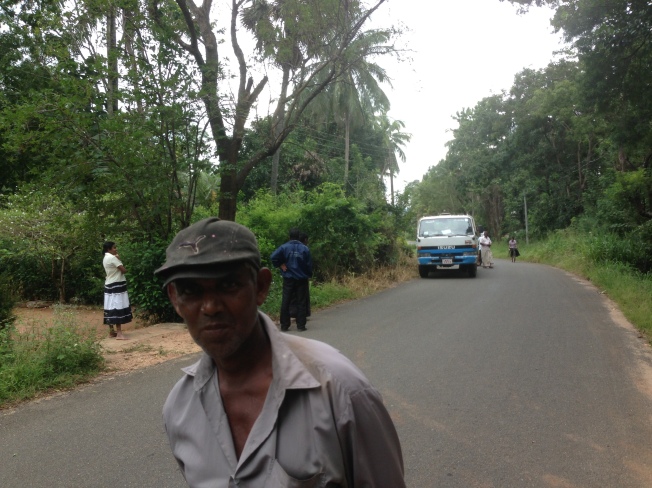 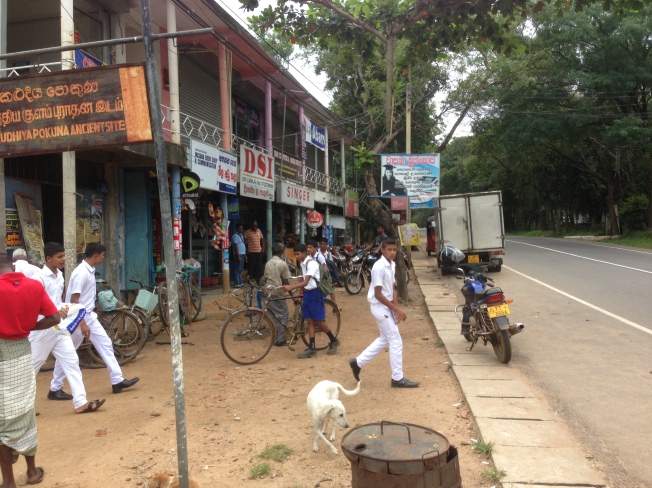 Talking to a couple of chaps manning a vehicle exit to the fortress revealed the location of a similar rock and shrine a short distance away which was not subject to an outrageous entrance fee. As I pushed my bike I spotted another chap called Loah walking in the same direction. He was an Mexican/US traveller.. and a bit broke. He told me of a secret way onto Sigirya rock used by local archeologists and which he had heard about from the owner of the hostel where he was staying. He had already been to the shrine at the other rock  and was looking to see the rock fortress too. We found a track leading up and I hid my bike whilst Loah hid by a wall. It was fun in a school-boyish manner to sneak in. We soon joined the tourists at the rock to view the huge lions feet hewn out of the rock. Then we ascended the metal walkways leading to the ruins on top of the rock. To be frank the ruins are not a great deal to look at but the view is magnificent. There is a museum but having chanced our arms that far decided that the rock and its surrounding ruins was enough to see. Highlights were an ancient bathing pool, an audition seat and of course the view which revealed Adams Peak in the distance with a little cloud below the top of Sri Lanka’s highest mountain. 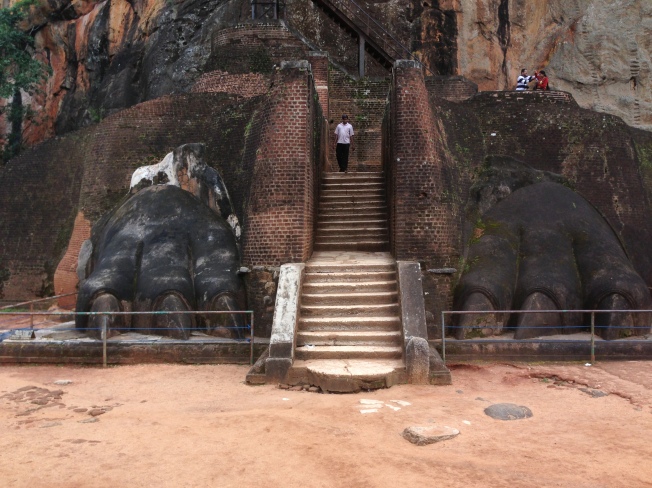 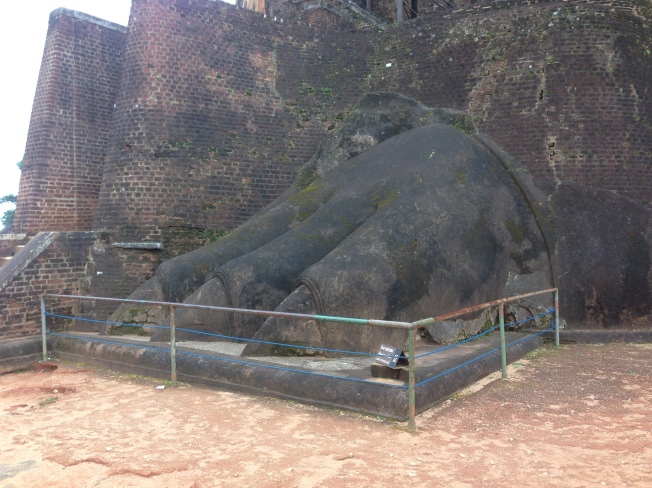 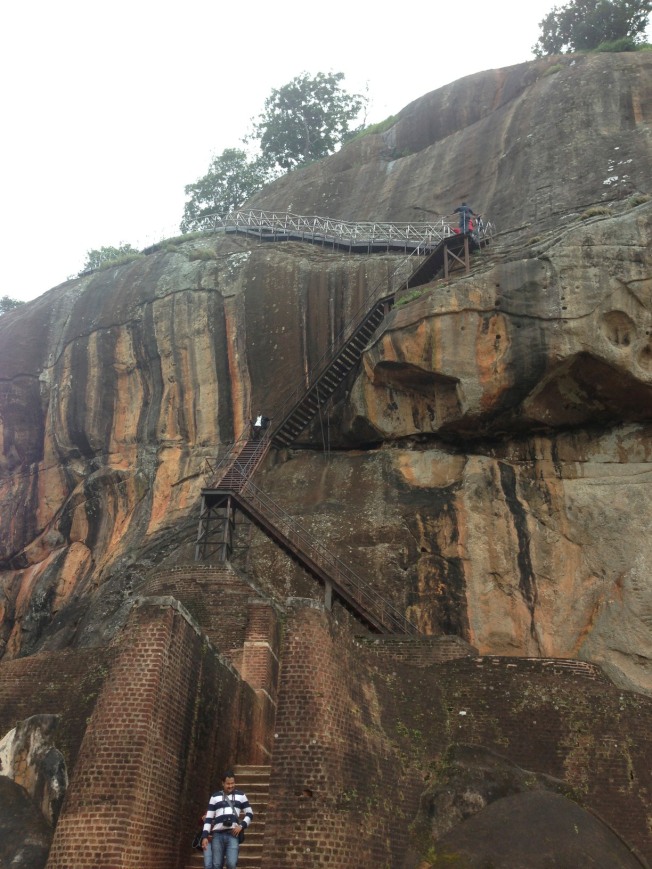 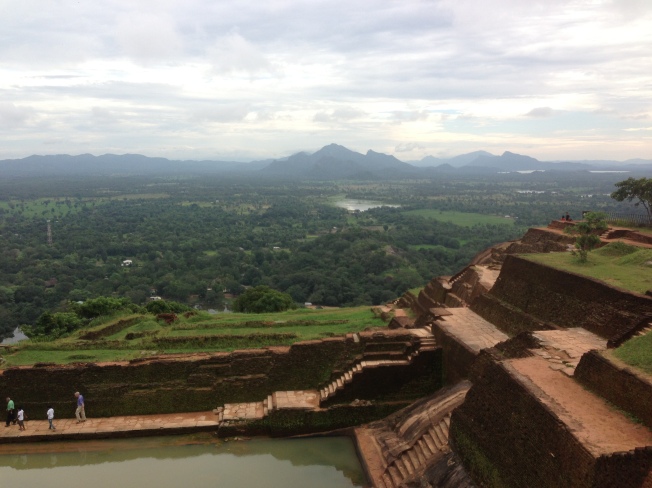 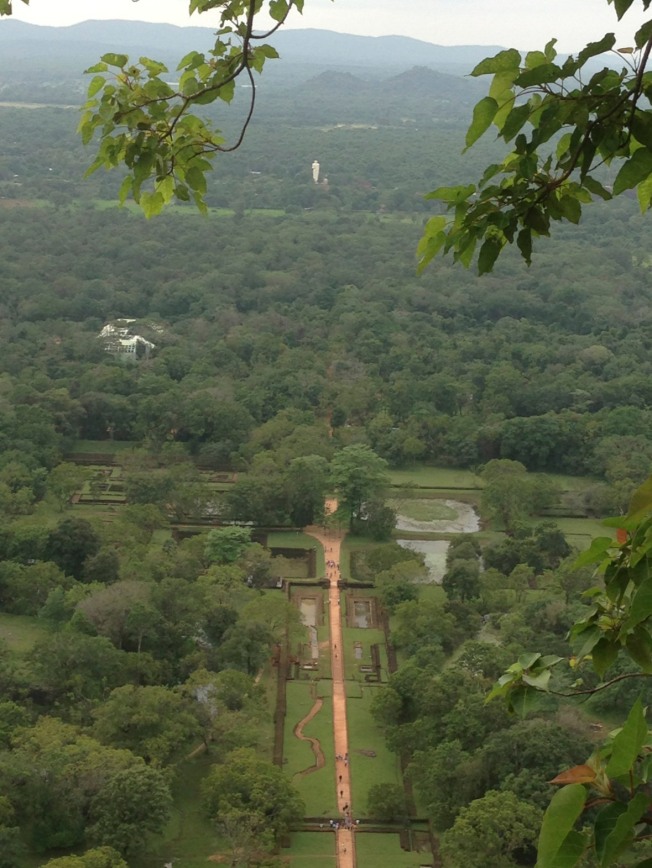 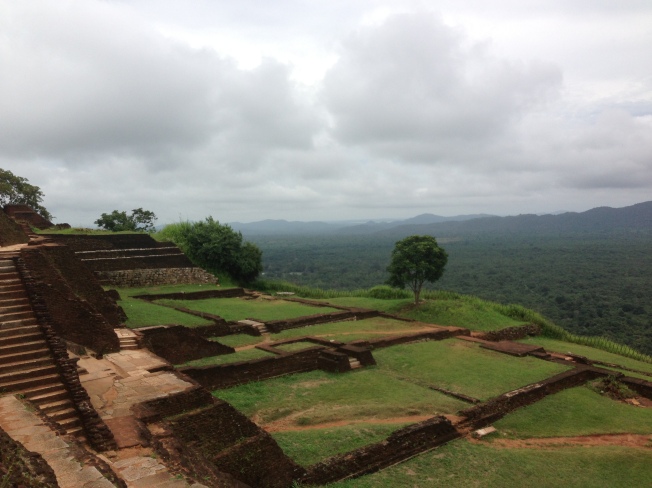 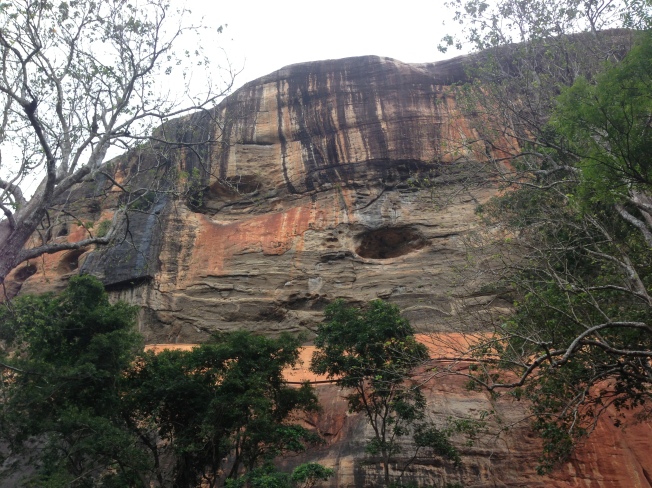 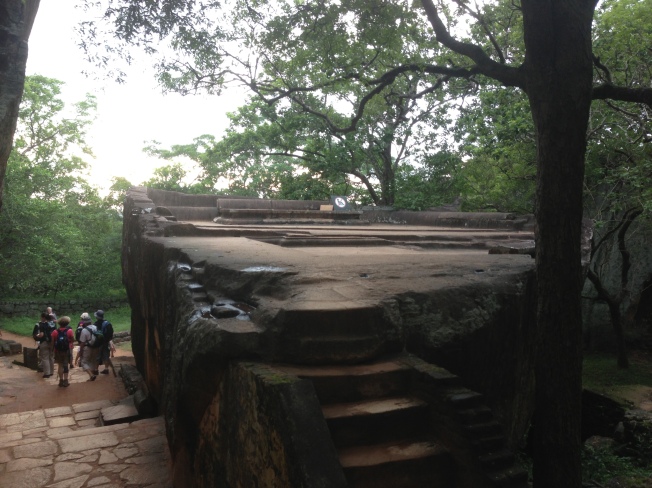 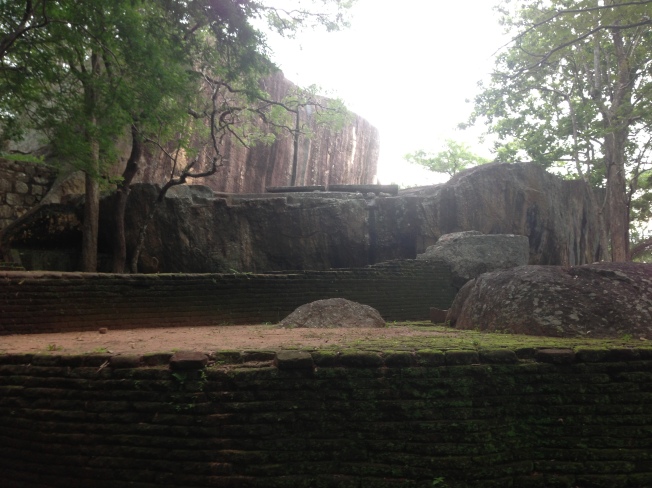 Loah had suggested a good hostel and which is detailed in Lonely Planet. It looked great with lots of travellers but sadly was full. Alternatives in Sigirya were few. The place was full and a popular destination to visit.
I avoided the touts and set off on the road South towards Dambulla. It was dark and used my bike lights not knowing how long I would be cycling. Bicycles with lights are extremely rare in Sri Lanka.
I found a wonderful hostel and negotiated a decent price for a quality room with en suite and hot water. I was asked not to say how much I was paying to the other guests staying either side of my room and which consisted of a German couple and two French girls. They had paid about a third more but my problem as always is not being able to get single rates. Two to travel is very cheap when sharing. I do claim to be two. It is me and the bike.

A great nights sleep and back on my mechanical horse. To Dambulla! 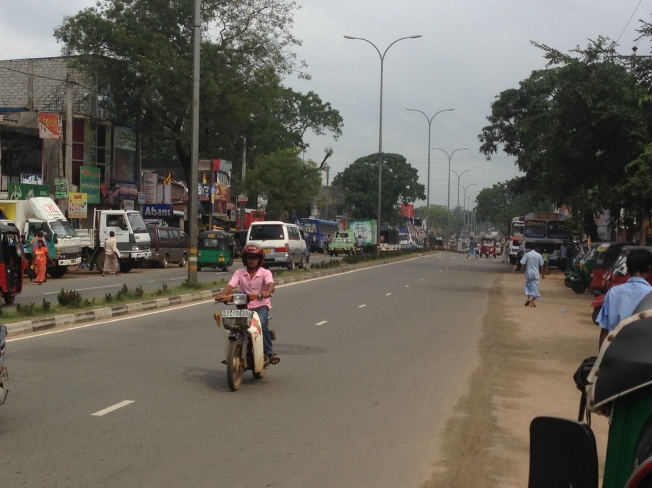