The  dusty road from the Laos -Viet Nam border at Na Phao drops quickly and winds down into a valley. It was hot and dry and I was low on supplies. Most importantly I had not been able to change any money. So when I did finally find a shop my cash was worthless. I hungrily pressed on in the heat. Eventually I came across a woman selling water melons by the road. To my absolute delight she accepted a US dollar for one. I sat on an old rotten tree trunk and enjoyed that melon like no other before being stung by huge red ants. I moved off that log pretty quickly. The road (AH131) was pretty good with little traffic. I passed through a few small villages consisting mostly of stilted houses. But then came to the town of Nakai which not only had a BCel ATM but also a Laos Telecom office where I was able to get a sim for my phone. The day was starting to work out nicely. The scenery was great with karst-like hills all around. 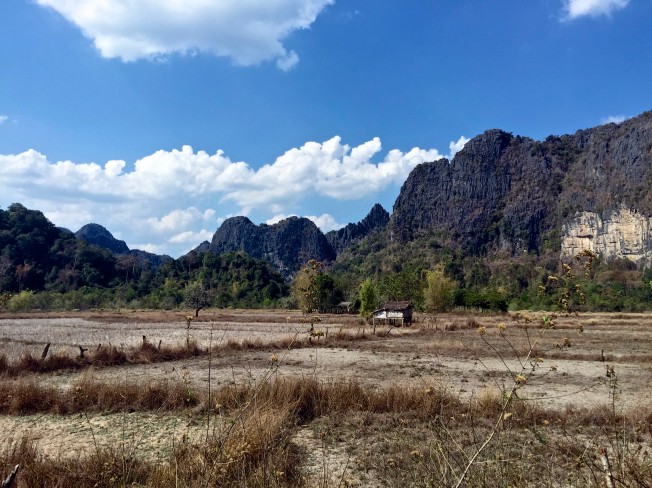 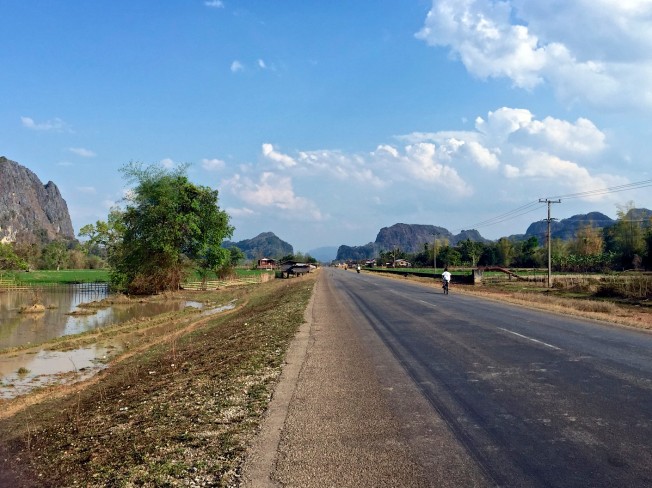 Following the AH131 towards the provincial capital of Thakhek I stopped for lunch at a market.  The range of local food was very different!  Snakes, frogs and variety of small mammals were for sale. But I was perfectly happy with noodles for lunch..

As I rode towards Thakhek I saw a lorry stopped in the shade that was piled high with crates of Lao beer. It was quite a lovely sight for someone that had just cycled through a desert valley. I smiled at one of the guys in the cab and happily pointed at the beer. He smiled too, scrambled out and up onto the back of the lorry, and passed me a bottle of beer. GREAT! Thank you, thank you, thank you! The bottle was warm and slipped it into one of my front panniers. I thought to save it as a special treat for later and continued towards Thahkek.  Soon I came upon a  roadside shop. They had chilled beer in a cabinet so I asked and was able to swop my warm bottle for a chilled one. I stopped at a cafe and shelter next a river. I sat with a woman who was scraping the fur off of what appeared to be several large rats before popping them into a cooking pot. A man appeared who was waiting for visitors. A number of Western tourists turned up on motorcycles and he took them to their sleeping quarters in a building in the field behind the cafe. I drank the beer and set off over the bridge. I wondered how the tourists might have enjoyed their meal that evening.

On the approach into the regional capital I gave my last few remaining balloons to the children of women selling melons by the roadside. I was offered (but refused) a free watermelon but did buy an ice cream from a vendor.

I looked for, but failed to find, a well recommended backpackers guest house that was  detailed in the guidebooks. It is a little climb in to Thaheck before reaching a roundabout from which the road either heads south parallel to the Mekong river or runs straight to the river promenade. Fountain square represents the old centre and has a French colonial feel about it.

The Inthira Thakhek hotel on the square looks rather plush and I tried to negotiate a better room rate than that offered. I did get the price down but had a ground floor room directly behind the reception. Apparently the first floor rooms with balconies overlooking the square are the ones to have. However I was able to keep my bike next to my room. It was all quite luxurious and a far cry from my usual choice of cheapie hostel accommodation.
I am not sure the management would have approved had they realised that i was using their beautiful shower to do my washing and string it all up on a line across the room.
A short walk across the square revealed the wide Mekong river and Thailand on the opposite bank.