In the afternoon I made my way to the Kalkudah beach favoured by the locals. It stretched as far as the eye could see and was deserted. Several hotels were under construction although the area was quiet. One hotel  was being built by the army for government use.
Close to the beach and next to the concrete shell of a hotel under construction was a little round shelter that I would expect to find at a beach bar. It had brightly coloured fairy lights on its thatched roof. This was quite surreal and like finding a park bench on the moon. I had a swim and used this shelter for my stuff. Later a workman appeared from the concrete shell and happily took me on a little tour of the building including a view from the second floor. There was to be three more floors on top. He made me some tea. I felt like the first guest at the hotel.
The beach was great and good to have a little time out but the experience is tempered by the great tragedy of 2004. Ashoka at the guest house had lost his sister to the tsunami. The chap working on the new cabana next to mine had lost his mother and son. This was a place of great sadness. 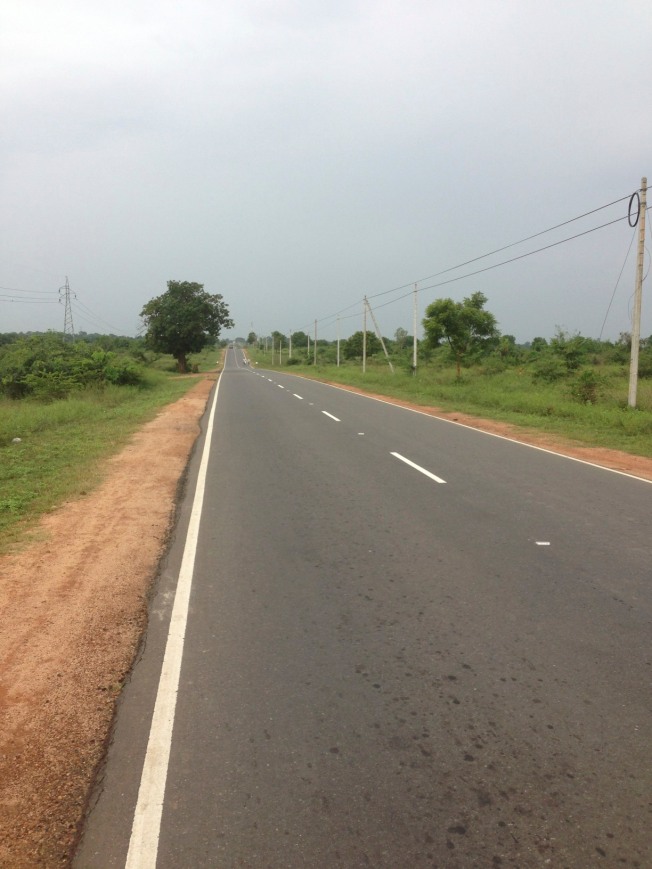 A restful nights sleep and then back on the bike. It had rained and the road from Passikudah was littered with giant tree snails. As I headed inland on the A11 I was presented with a seemingly infinite ribbon of tarmac stretching into the distance.

Pushing on up the East coast I viewed abandoned buildings partially destroyed by the tsunami. Conversely there were many signs of renewal some of which has been undertaken using overseas aid. I stopped to look at some curious looking ‘hobbit’ homes and was told by a local farmer that they had been built by a Dutch relief agency.

The road was good but I became quite baked by the sun. Once past Komari I finally, and quite exhausted, made camp on the opposite bank of a river next to the Eastern university campus at Oluvil. 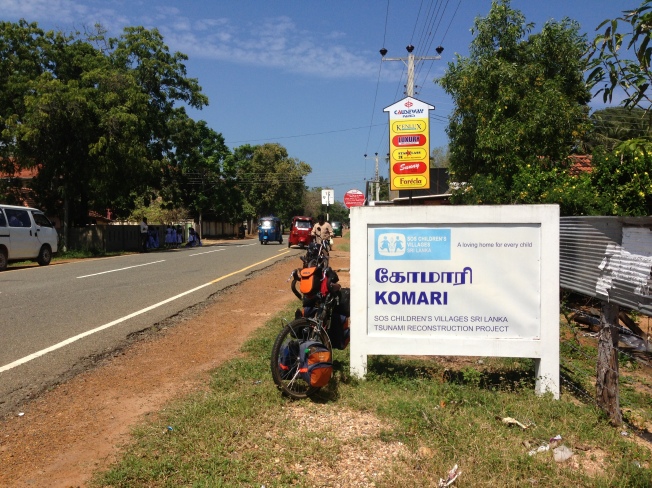 The next day brought more sun drenched beaches and coconuts on slivers of land between sea and lakes. The road took me over bridge after bridge. I passed through the bustling city of Batticaloa, again with a noticeably large Moslem population, and headed to the well reviewed beaches of Passekudah Bay. 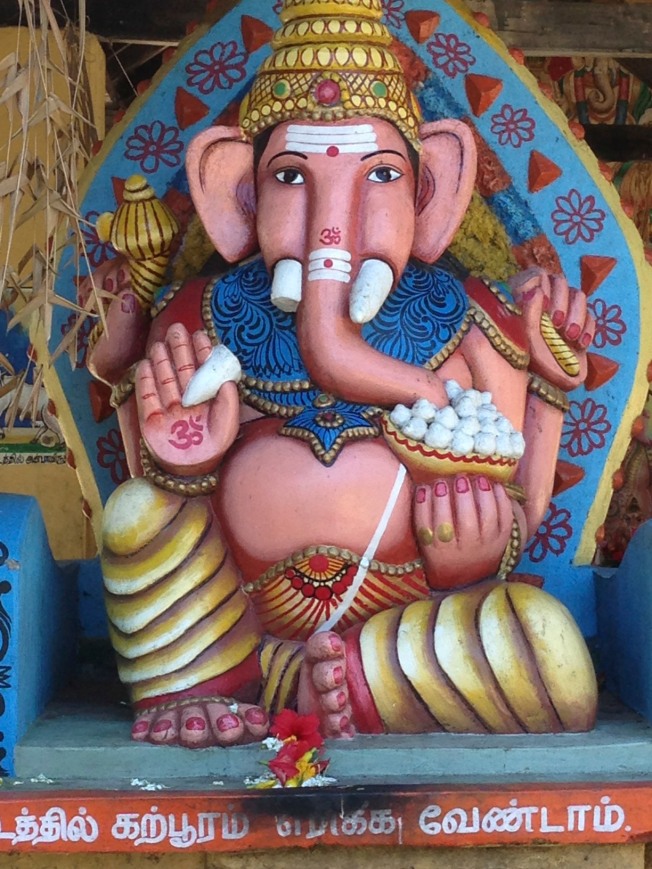 Passikudah bay and its neighbour Kalkudah bay have beautiful beaches. However the surrounding area is little more than a major construction site. There are established high end holiday resorts pandering to the well heeled but the rest is a bit of a mess. No doubt the place will look like the French riviera in a few years time but meanwhile it simply provides buckets of work for labourers from the surrounding region.
I am now addicted to Sri Lankan ‘plain’ tea so I made for a small place serving tea on Passikudah beach. Lonely Planet reveals a local guest house ‘nearby’ (Anna’s) but was advised to go to a place a short walk away called ‘Kogulas’ (renamed as Inn On the Bay’) Good advice. I was welcomed by a young chap called Ashoka and shown a newly built cabana in the garden. It was one of three with another under construction. The other cabanas were occupied by local traders. Ashoka was not the owner and intimated that the owner had another hotel in Battilacoa and really not too interested in this one. The main building itself was somewhat dilapidated. Kogulas was the first guest house in the area long before the idyllic beaches started garnering interest from further afield.
A good nights sleep and I headed off the next morning to check out the local town of Valaichchenai. It is some distance away but on the way was delighted to see an orange painted library with a wonderful statue of a candy coloured four armed god by the entrance. 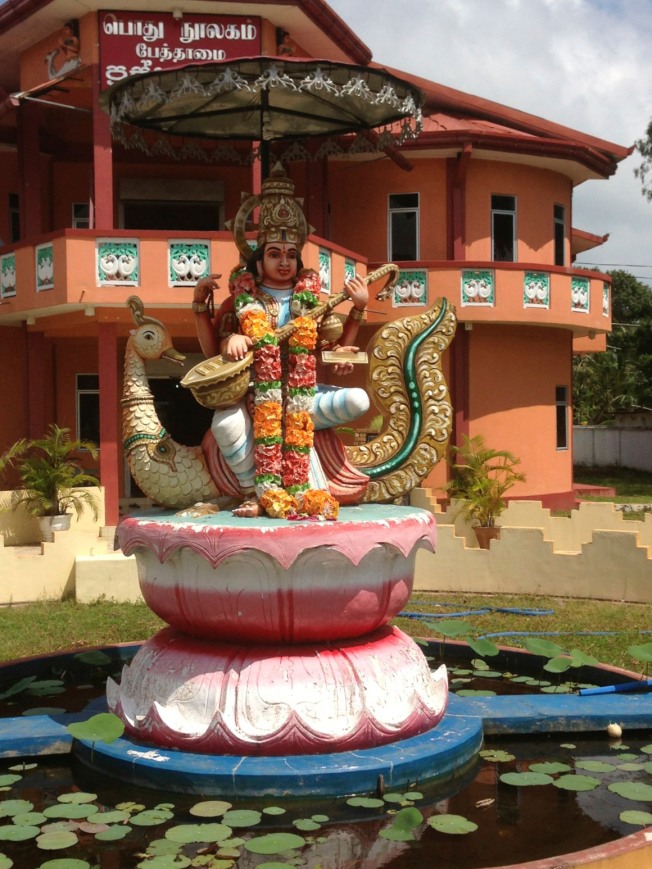 The town itself was buzzing with activity and a fish and vegetable market in full swing. 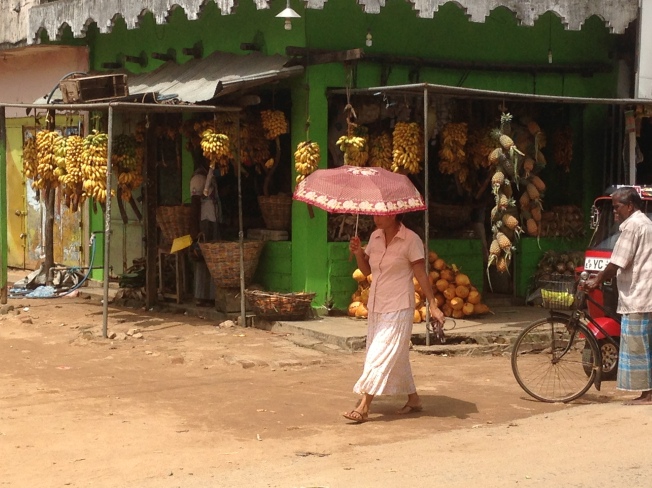