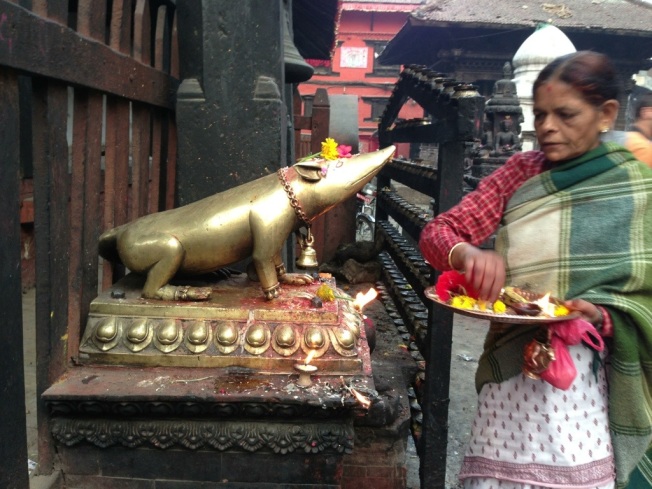 The ride down towards Kathmandu was a little hectic. Getting closer to the edge of the capital and its ring road involved a little uphill slog amongst heavy afternoon traffic. The fumes were terrible and caused my eyes to water.
I crossed the ‘river’ Bishnumati which joins the Bagmati river to the South and which curls and cradles Kathmandu. The ‘rivers’ are open sewers and the stench is incredible. I stopped by a riverside temple to get my bearings. The temple appeared quite ancient with intricately carved stone and was very beautiful. It was odd to see such a wonderful historical building next to the sight and smell of a river filled with human waste. I headed to the North of the city and where many travellers stay.
Several hotels recommended by Lonely Planet are situated in the tourist nirvana of Thamel. The district is filled, like Pokhara’s Lake Side, with shops, hotels and restaurants. Navigating through the maze of tiny streets I finally found the Kathmandu Guest House. It looked a little too upmarket and was not disappointed to find it full.
I tried another and was also fully booked. After fending off a few touts I saw two Germans fully loaded with their backpacks. They had just returned from a trekking expedition and were making their way back to a hotel they had previously used. I tagged along and booked a small single room at the Himalayas hotel in Jochamel at ‘Freak St’. It was incredibly cheap at less than £3 a night and within spitting distance of Durbar Square with its temples and Palace complex; the most spectacular place in the city if not the whole valley.The hotel owners daughter; Moni Mulepati and her partner had married on the summit of Everest in a short ceremony.
The Himalayas hotel had a well kept roof garden with several trees, a small lawn and potted plants. It proved to be the perfect place to take breakfast of fresh coffee, croissant, two boiled eggs and bread roll. I was able to keep the bike in the room. It was a little tricky carrying upstairs to the second floor but far more difficult carrying down and avoiding dislodging pictures on the wall. The hotel provided Wi-Fi on the ground floor and the signal, although patchy, reached my room on the second floor. My room overlooked a communal courtyard with a creaky water pump.
For my first evening I dined at a local restaurant with the two German backpackers that had led me to the hotel. They were a father and son. The father, a software engineer, was returning to Germany and his son was waiting in Kathmandu for a friend to arrive. They were going to the Terai to do voluntary work.
The food at the restaurant was pretty good. I opted for the Newari set and in addition to the usual Dal Bhaat there was a portion of millet. I had been given this in the Western Terai. I am not keen on crunching through dried cereal and left most of it. Otherwise the meal was excellent with wonderful hot roti bread. To celebrate my cycling conquest of the Valley rim I had two bottles of Ghorki Nepali beer.
A walk towards Thamel a few days later became an interesting affair as the festival of water and colour involved people throwing brightly coloured pigments at each other. Water was dropped from heights onto passers by and the main square turned into a ‘rave’ with music and dancing. The festival is the most popular one with children with many saturated in water and colours.
My plan was to stay in central Kathmandu for a few days and then look for a more rural or peaceful retreat for the rest of my stay. I thought to explore the Valley on my bike and commute into the cities of Kathmandu, Patan and Bharaktapur. Backpackers staying in the commercial ‘hipster’ district of Thamel can find it all a little overwhelming after a few days. However, and after talking to an American teacher who had lived outside the capital with a similar idea, I realised that the Himalayas hotel was perfectly adequate and was far better accommodation than I had anticipated. I couldn’t believe my luck.

I spent the first day cycling down the east side of Kathmandu and then circling back to Durbar Square via the main road dividing the city. I wanted to get my bearings and take in some of the major sights. This first tour took in a large temple devoted to Shiva on the Tripyra Marj, Dashrath national stadium, maternity hospital, Singha Durbar (Parliament), old bus station, Ratna park, Bhimsen Tower, Rani Pokhari Shiva temple and back to Durbar Square. My next major trip was to the ‘monkey temple’ or Harati Devi. This was a good cycle ride up to a hill which stands proud to the West of the city. The magnificent stupa, temples, shrines and museum there are a sight to behold. The view is wonderful too. Breathtaking stuff!
Over the next few days I became quite familiar with the local neighbourhood and met many of the shopkeepers and local people that were to become regular familiar faces during my stay at Jhochen (Freak Street) and Chikanmugal. In particular I enjoyed the cheap dal bhaat (lentils, veg. and rice) provided every evening by a family in a Newari cafe close to the hotel. The Snowman cafe provided the odd lemon tea and cake and is one of the last surviving places from the original hippy invasion of the 60s. It looked like it had not changed much. I found a popular stall towards the Bhimsen tower for lunches and enjoyed fresh lassi drinks at Indra Chowk.
The Valley has three cities; Kathmandu, Patan (south of the Bagmati river) and Bhaktapur to the East. Each city is an incredible maze of tightly knit passageways with artisans and shopkeepers everywhere. At every turn is a temple or shrine finely decorated and crafted. The oldest parts of the cities (and which survived the earthquake of 1934) are filled with fairy tale buildings. Ornate stonework and detailed wooden doorways and latticework windows make ‘Nepal proper’ an incredible place. It is possible to wander the streets with eyes agog. What is also amazing is that it is a living breathing place with ordinary families living cheaply in buildings that would be conserved, preserved and protected ‘from the public’ elsewhere in the world.
I walked a lot in Kathmandu until I knew my way around around it fairly well. I took cycle trips to the Durbar Squares in Patan and Bhaktapur. At Patan during a festival I visited the golden temple and viewed the myriad of shops selling ornate metalware. At Bhaktapur I saw the chariots that were to lead the New Year festival of Bisket Jatra four days later. Sadly three men were killed under the wheels of the largest ‘Shiva’ chariot during a trial run the following day.
I visited Bodhnath and the largest Buddhist stupa in Nepal. I skirted the grounds of the temple at Pashupatinath and where families burn their (hopefully) dead relatives on ghats by a river. I cycled up to the Budhanikantha temple North of Kathmandu and where a black statue of Vishnu lies ‘floating’ in water surrounded by coiled snakes. Another cycle ride took me back West close to where I had arrived in the valley and then North East to another shrine at the Ichangu Narayan temple. There were many places of interest (temples, stupas and shrines galore) in between all my excursions and I enjoyed the open countryside beyond the built up areas.
It would be difficult to visit everything of note in the valley but felt that with my bike I possibly saw more than most visitors. I also felt that I got ‘under the skin’ of the city and enjoyed the company of many good local people and other travellers.

Kathmandu represented the halfway stage of my journey. I had no plans to travel further East and was in two minds about my next move. I had thought to drop South back into India and cycle back to Delhi via the Ganges plains. I had my doubts about this. The route would involve backtracking to Naubise. My poor experience with travelling from Delhi to West Nepal was not something I cared to repeat but was keen to visit Varanasi. I met a couple that had arrived from Varanasi. They told me that it had been a terrible experience. They became ill and everyone else they met were suffering too. Facilities were diabolical and the heat was overwhelming. The temperature worried me. It had risen to the 40s in Delhi; hardly the optimal conditions for cycling.
My second option was to fly from Kathmandu to Srinagar in Kashmir. This was far more appealing. I would then be in a better (English) climate and looking to explore India’s Northern states. Having settled on this I checked flight options on line via Expedia and found Jet Air the cheapest with an overnight stopover at New Delhi. It involved an extra nine days in Kathmandu and I would see in the Nepali new year. I booked the flight and Wongdhen House in Delhi provided me with a room for my stopover. Having arranged all this I was both pleased to have found a good solution and sad to know that I was leaving Kathmandu. I had made so many good local acquaintances and had become quite habitual in my daily routines. I was missing Kathmandu before I had even left.