From the Ranjit Sagar Dam I worked my way up on the East side of the Ravi river close to Lakhenpur. It was a hot day and high in the 30s. The roadside became thick with tall heavily scented cannabis plants.
From the Dam Colony I cycled past modern colleges and pleasant countryside to the town centre of Pathenkot. I stopped at a small busy junction by Ghandi Chowk. My plan was to find lodgings; stay for a few nights, and get myself well organised for the next part of my trip. I had no specific recommendations for accommodation in Pathenkot. I asked a policemen where the hotels were. He did not have a clue. So I asked him to point me in the direction of the railway station. Once past the rail and bus station I found a fair number of hotels on the main road, some of which were shiny towers of glass and steel. They looked quite swanky. I found a small hostel down a side street. Although a little pricy and unable to negotiate down, the room I got looked out into the street at ground level. I was able to wheel my bike in and even had the luxury of power, hot water an en suite shower room, toilet, TV and cooling systems. It worked out to just under £5 a night to stay at the Preet Guest House.

Pathenkot is a thriving busy market town. It has a modern high street and where I wasted much time trying to get a new data plan for my phone, but the heart of the place is in the old town centre. I had to walk a little distance along the busy Gurdaspur road to get back there. Roads pan out around a statue of Ghandi. To Ghandi’s right is the entrance to a large walled market area for fruit and vegetables. The residential area behind that and extending North is a maze of passageways and includes a small temple. Close by is a small workshop for creating religious statues. 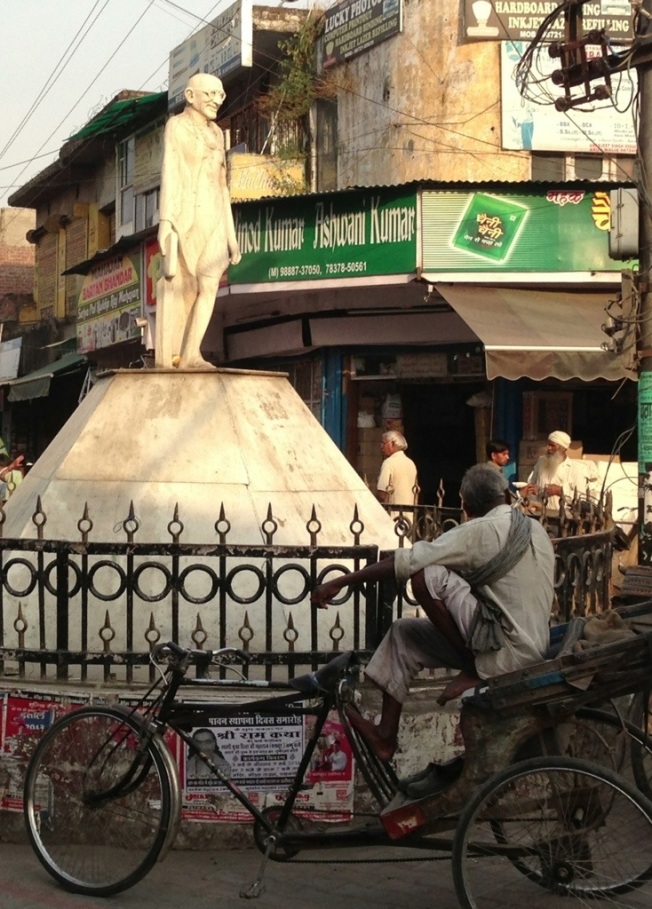 A great discovery was the local lassi shop in the narrow passageway behind Ghandis left shoulder. It is not difficult to find as in the heat of the day it attracts a crowd of people waving money or drinking lassi. The owner crushed ice in a large mixer on his counter and added curd or yoghurt. The curd was brought in large cakes by a boy or runner who piled them high at the other end if the counter. The lassi was served in large steel goblets with a big slice of soft curd crust on top. A taste of heaven! The second day I visited the stall I had two. I will now forever be looking for those delicious lassis being served behind Ghandi’s back.
I visited two temples close to the centre. One was very busy and I sat and drank complimentary tea with the two guys running the tea and milk sweets stall at the entrance. Saddus sat by a side wall in the shade of a large tree with huge matted tendrils hanging from its limbs. One Saddu’s hair had exactly the same appearance. I was told they only sat there on certain days of the week and moved on to other spots. The second and quieter temple stood to the East of the centre in a slightly built up area surrounded by fields of towering cannabis. I could not help myself and walked into one to briefly disappear.
The large pictures on the wall of the entrance to Sai’s Bliss temple were particularly cool. 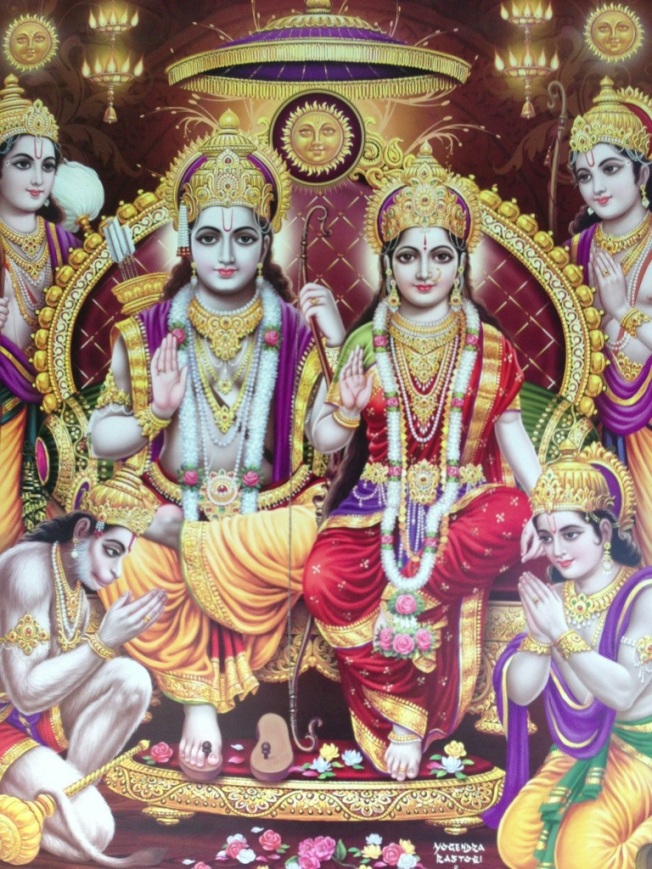 I took an early morning walk past the bus and railway stations where the Saddus collect. I saw newspapers being sorted and folded for delivery by bike.
Ever since first seeing a large three wheeler vehicle in West Nepal I have been fascinated by their look and design. There are a lot in use in Pathenkot and spotted a line of them at the bus station.

They are great looking vehicles that appeal to me a little like steam punk art:

I managed to buy supplies and some replacement (better) glasses. All was relatively cheap. A search to buy real coffee of any kind drew a blank and had to grab a small jar of (yeuk) Nescafé.
I decided to drop the idea of visiting the golden temple at Amritsar and focussed instead on reaching the cooler hills of Himachel Pradesh. The daily temperature in Punjab was heading for the mid thirties and quite uncomfortable. With an early start I figured I could make good progress towards the hill station and home to Tibetans in exile of McLeod Ganj or little Lhasa. I ate a good meal of rice, veg and roti bread in an eatery opposite the bus station which I washed down with a fizzy fresh lemonade from a street stall I had used the night before.

After breakfast I head East along the Dalhousie road. It didn’t take too long before I crossed the bridge over the Chakki river and into Himachal Pradesh. Very quickly I was climbing through green hills past monkeys and goats. I ate up the miles and a few samosas for lunch. It became increasingly hard work as the hills rolled up and down until finally, and after a full days cycling, I arrived at the typically Indian town of lower Dharmsala.
The climb to McLeod Ganj was a little steeper than I expected. Nobody cycles up. It is practically impossible. I tried and had to dismount regularly and catch my breath. It had been an extraordinary day and had travelled over 80 kilometres. I surprised myself by arriving a day earlier than I expected at the home town of the Dalai Lama. 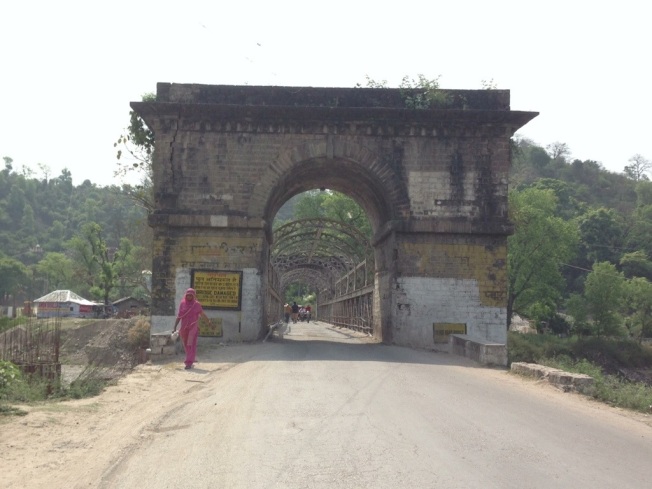