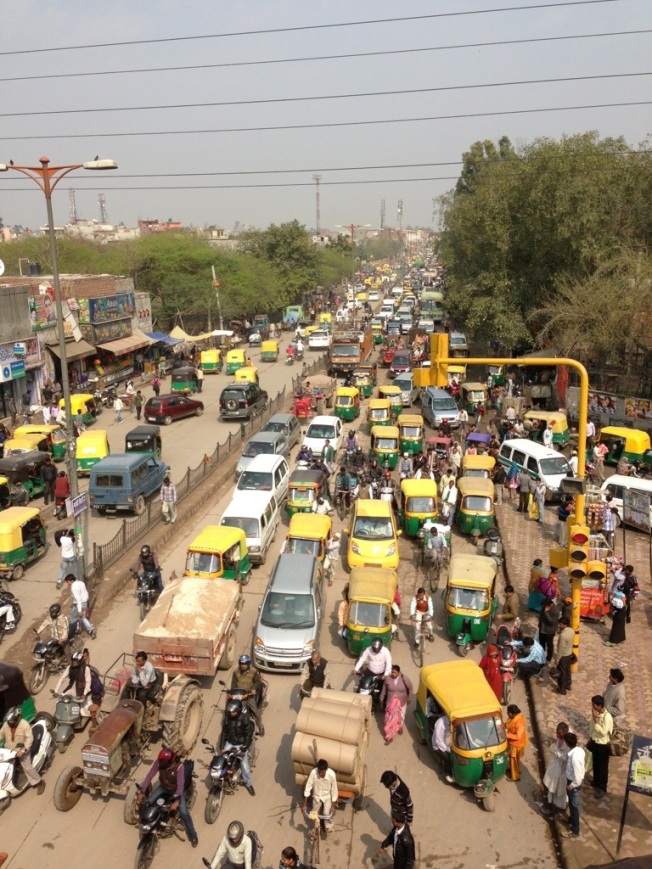 My stay in Delhi was extended. I telephoned my mum and heard someone that sounded like they had suffered a stroke. This was the case. I contacted my wife and brother She was quickly admitted to hospital and I put everything on hold and waited for news.
It was a temporary ischaemic attack. Not good but no longer an urgent situation. She was put on a short waiting list for a procedure to improve her cerebral circulation. With help at hand the situation was under control and I could consider leaving Delhi. It was a difficult choice but with reassurance that all was okay I felt I could move on.
The bridge over the Yamuna river was jam packed with early morning traffic in each direction. I struggled to escape Delhi but only once past Ghaziabad did the traffic thin out. The suburban sprawl extended and the living conditions seemed extremely poor. Buildings are in a bad state. Everywhere is strewn with rubbish and surface water is black, smelly and contaminated. With a large poor population trying desperately to eek out an existence it was a place from which to escape. Traffic belches out huge volumes of pollution and the air is difficult to breathe. As a touring cyclist I hated it all and felt sorry for the people that were forced to endure such conditions.
I made Hapur and desperately searched for some kind of lodging. After a bit of a search I found a hotel on the station road. It was expensive and a bit crummy. During the night a storm raged. I awoke to find the streets flooded. 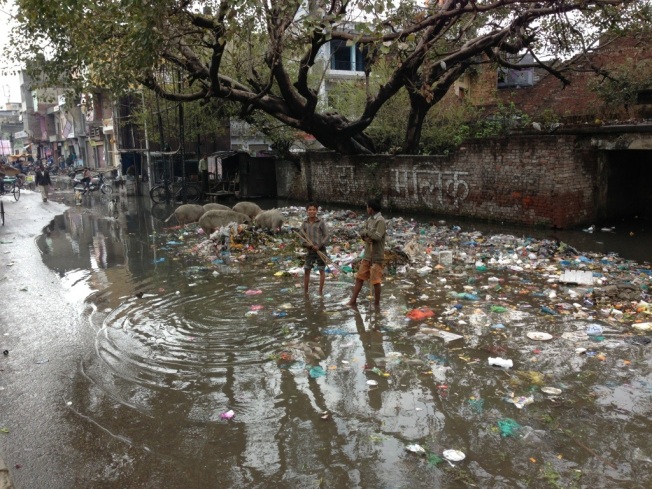 After sinking a cup of tea I set out once again. Breakfast was gratefully provided on the road by a shop owner on a motorbike who gave me various pastries as we moved along the road together. 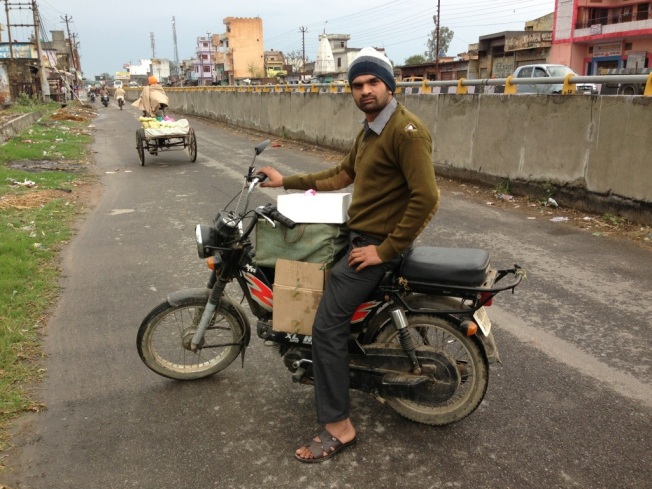 I had to cycle around a lorry that had not quite made a bridge and lay on its side. 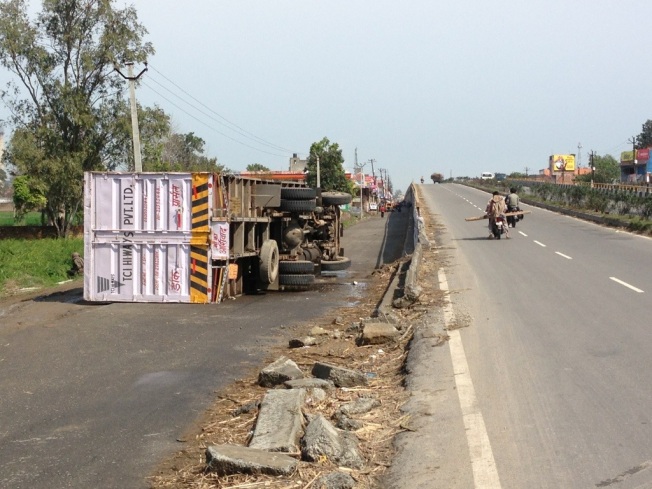 The next stop was Garmukteshwar. This busy town lies to the West of the sacred Ganges river. I cycled through local farmland until finally reaching the ‘mother’ Ganges. 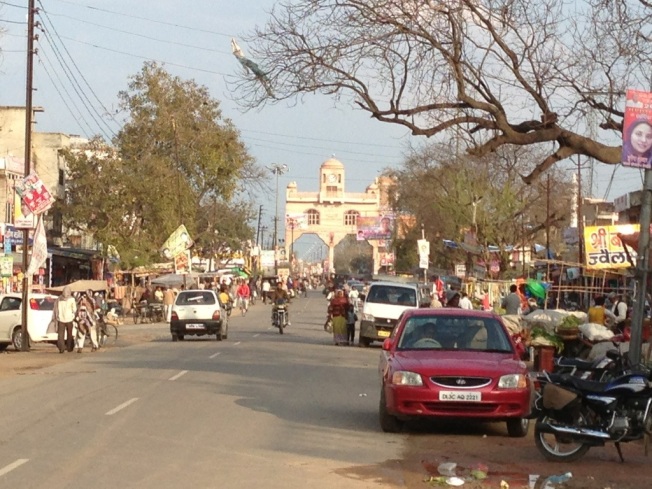 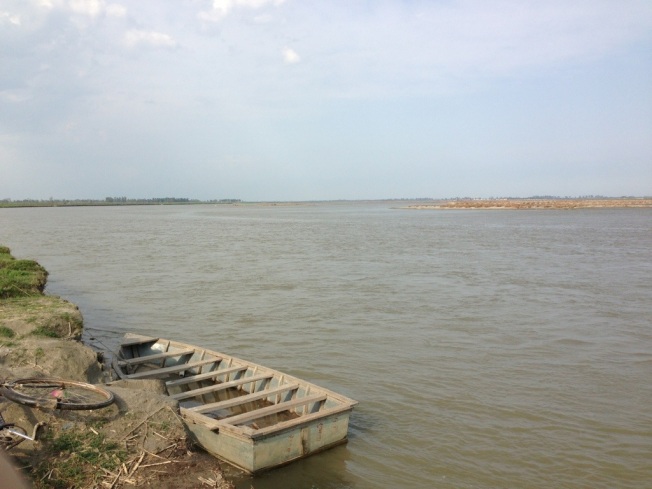 I returned to the town and on local advice went back to the main highway to continue East and find a room for the night. I turned down the first motel which was both expensive and looked empty. A little further on I reached the road bridge over the Ganges. On the West bank lies the Hindu pilgrimage town of Ganga Snan Ghat. I was able to get a fairly decent room at a large pilgrims hostel with a large auditorium and canteen. 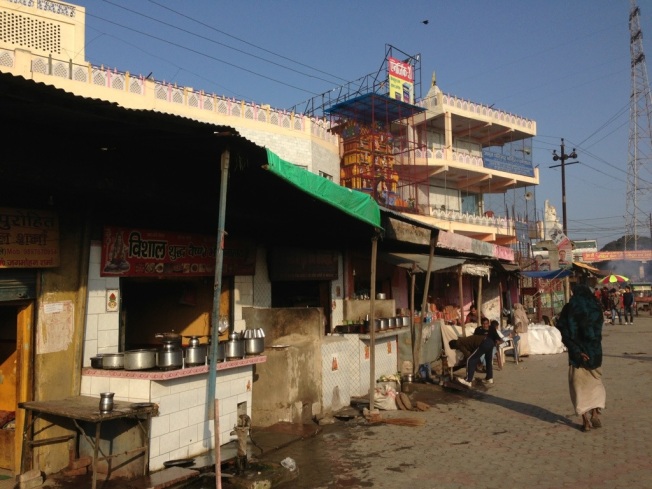 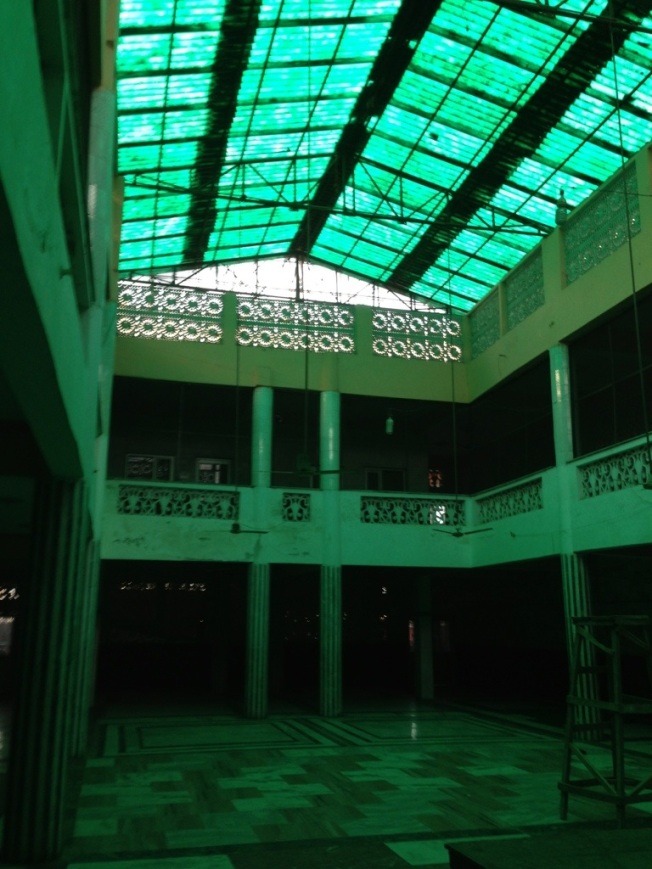 The Ganges is big business. The riverside was filled with pilgrim services; offerings, boat trips, ceremonies and shrines. Stalls provided food and religious items. Many sadhus or holy men wandered about. I bought one of them lunch. I watched as people immersed themselves in the Ganges and had a good walk around the town. At a temple devoted to Ganga I was invited in to the main courtyard and sat to chat with the temple elders. 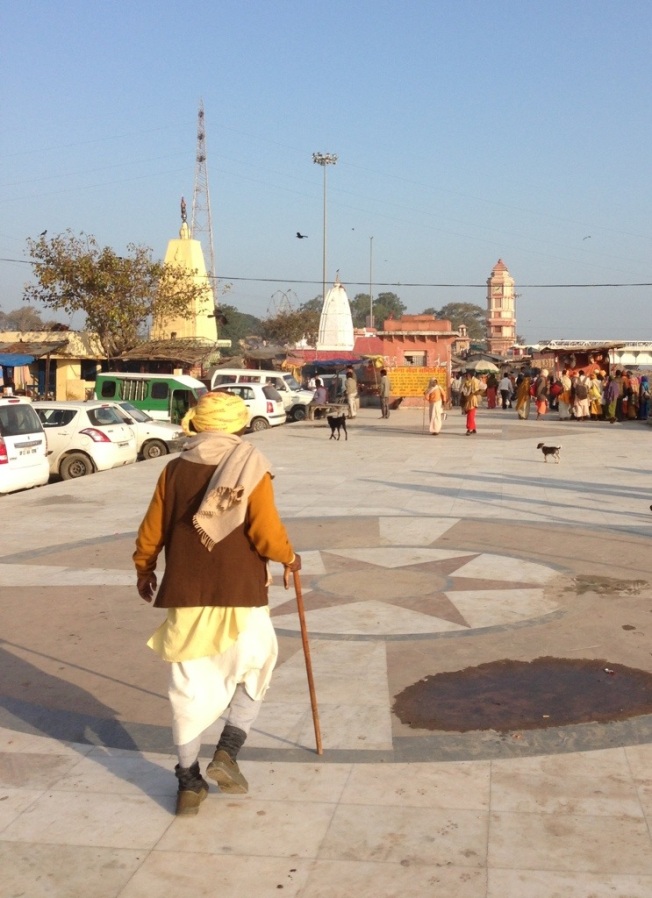 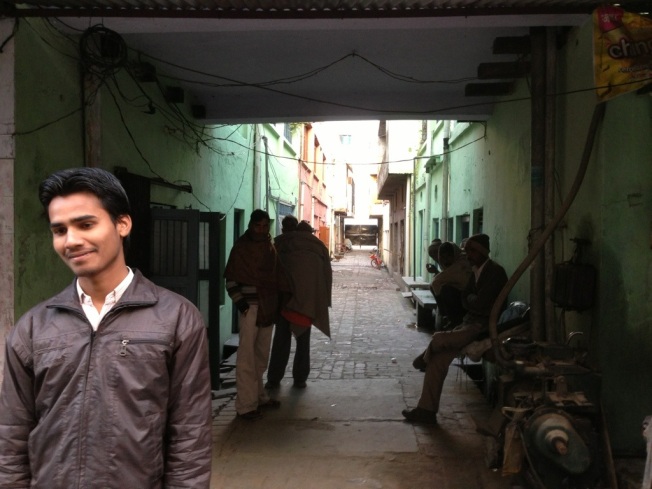 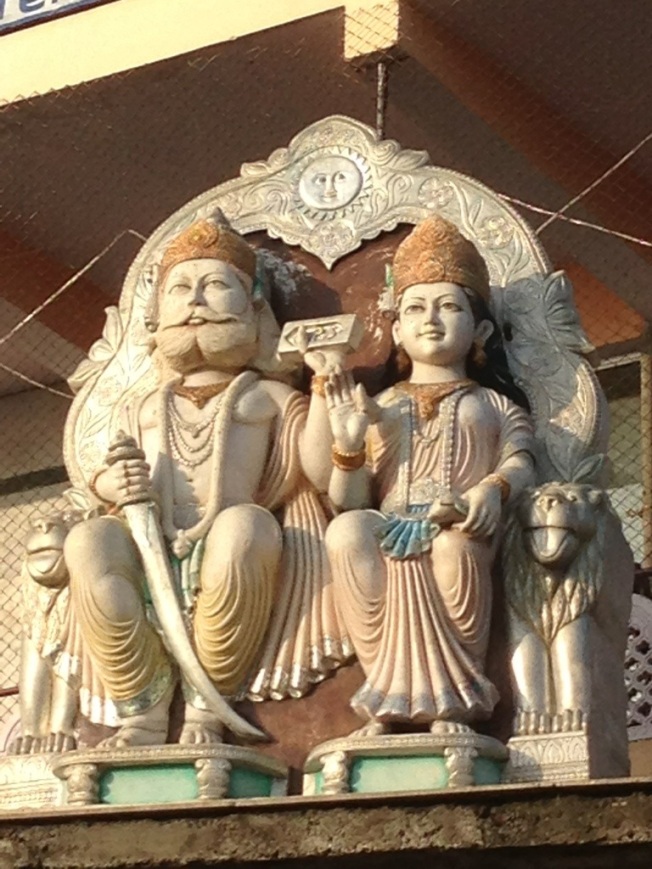 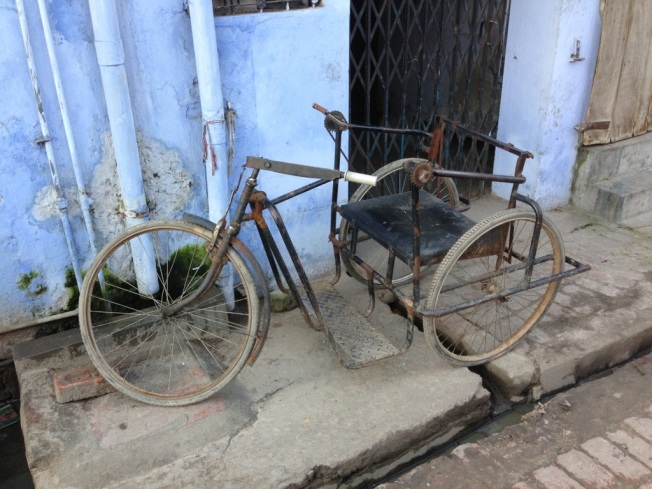 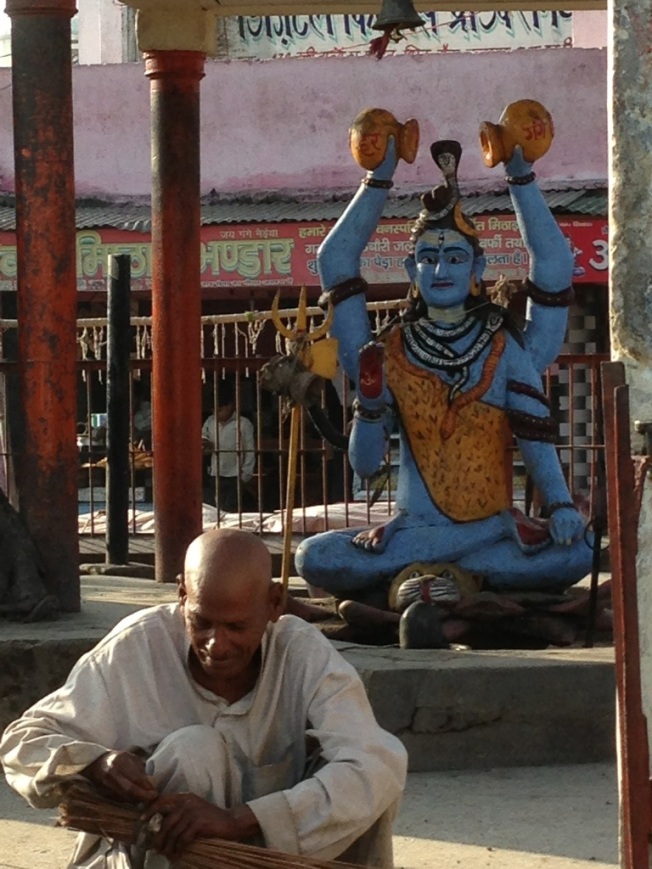 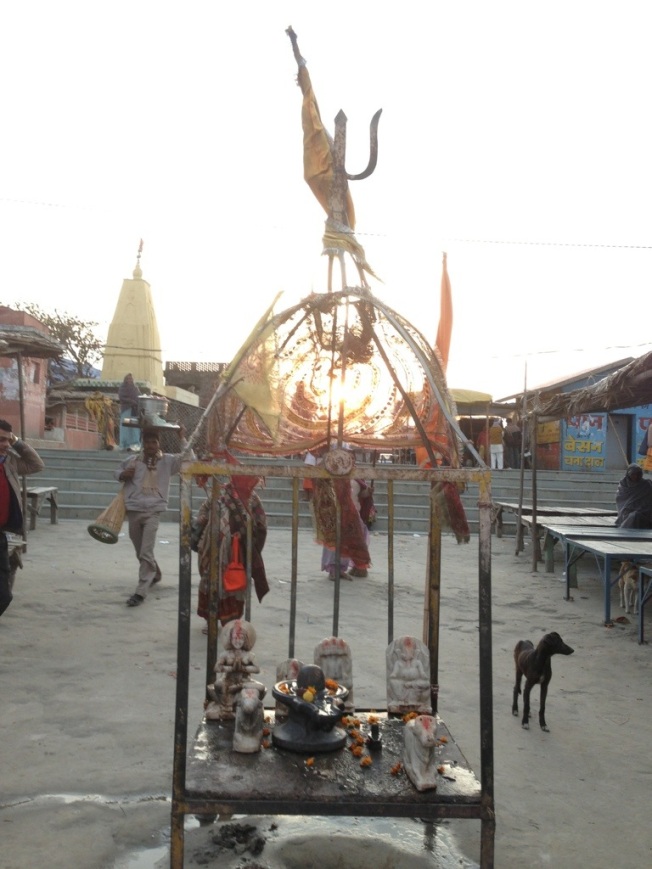 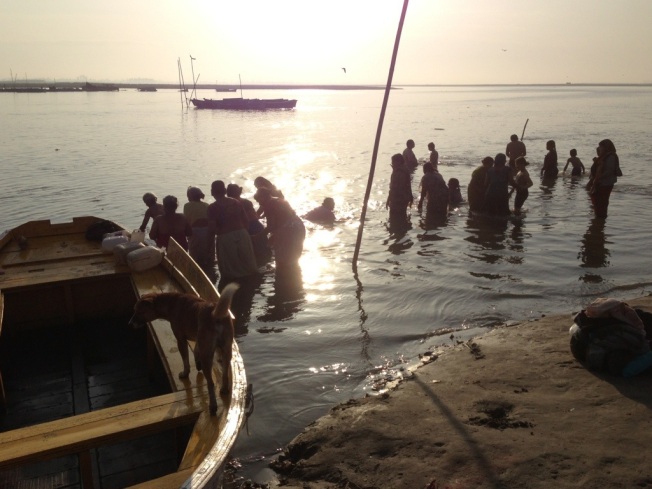 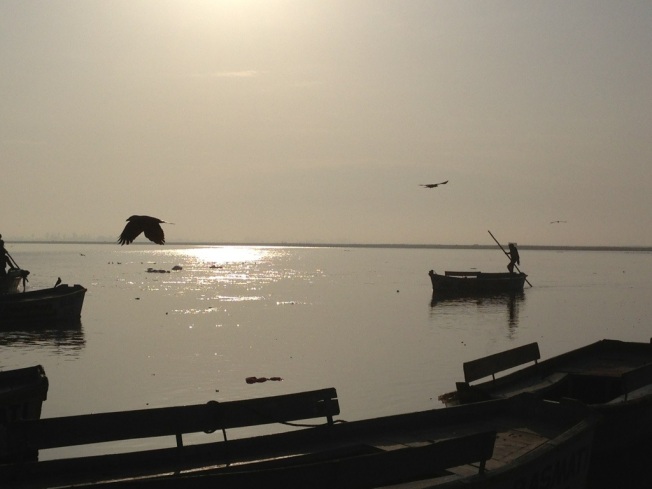