The N6 or ‘Route Principle Fes Meknes’ from Fes to Meknes was a fairly pleasant morning run. Once out of Fes’s suburbs and into countryside the road gradually dropped down through a series of undulating hills. The fields of crops contrasted greatly with the Southern plains that I had seen.  There is little to distinguish it from similar farmland in Spain or France. Closer to Meknes the cereal crops gave way to fields of olives tree and grape vines. I stopped at one ‘Domaine’ hoping to pick up some wine but to no avail. Farmworkers were very friendly though.

Meknes is a modern metropolis with its ‘Ville Nouveau’ extending East towards Fes along the main road and railway line. The old city and Medina stands proudly on hills to the West.  Several short climbs brought me up to the sultan Moulay Ismail’s  city walls and to the Bab Mansour; one of the most beautiful gateways I had seen during my visit to Morocco. The sultan made Meknes his capital city during his reign of Morocco (1672 -1727) and this gateway was one of his crowning achievements. 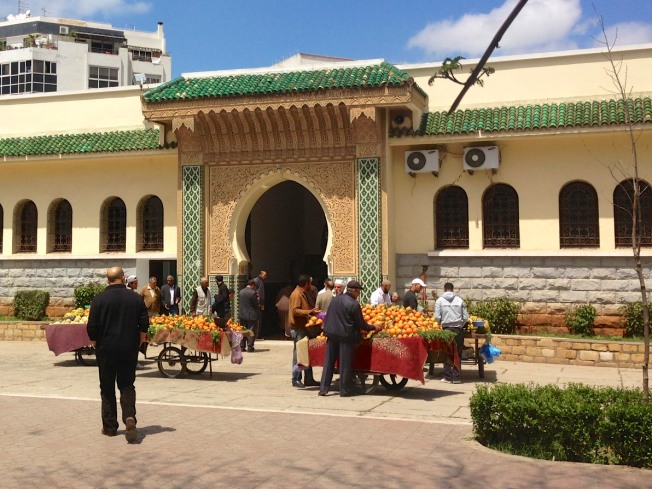 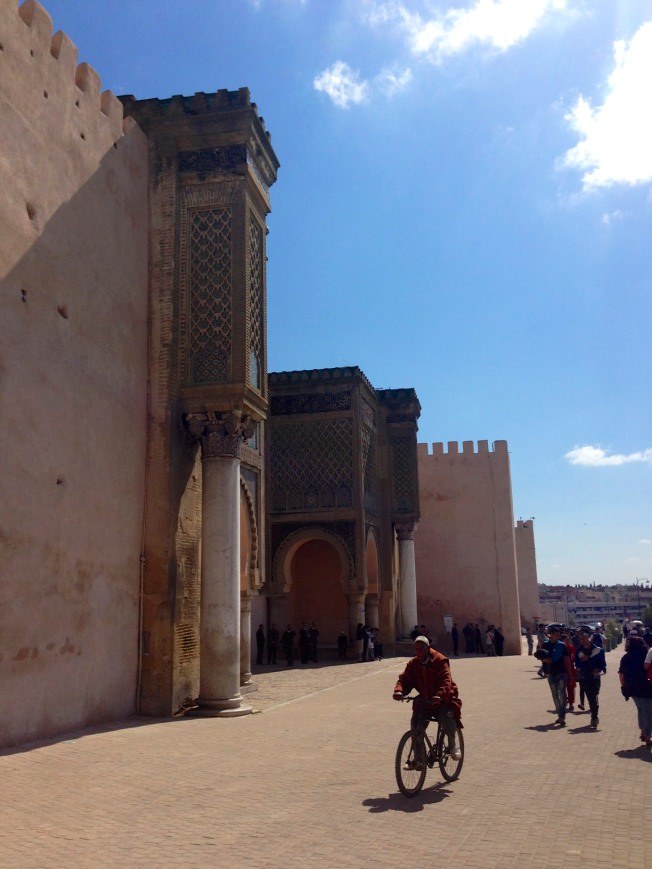 The fearsome sultan Moulay Ismail transformed Morocco during his 50 odd years rule. His enthusiasm for building and creating formidable architectural works entailed being fairly ‘hands on’  and included doing a little labouring himself. He used some materials including marble columns for his gates and buildings from the nearby Roman town of Volubilis. He also fathered over 1000 children. He must have been a busy man. However his main reputation came from his capacity for killing people sometimes in quite an arbitrary fashion. Looking at one of his wives would have resulted in a quick dismissal and death. It has been estimated that he killed over 30,000 people and made public displays of severed heads as a way of instilling fear and maintaining order.

The Bab Mansour and nearby smaller Bab Djemma en Nouar now provide the entrance to indoor displays. Opposite them is the Place De Hedim; a grand square or courtyard that leads to the Medina and food halls. 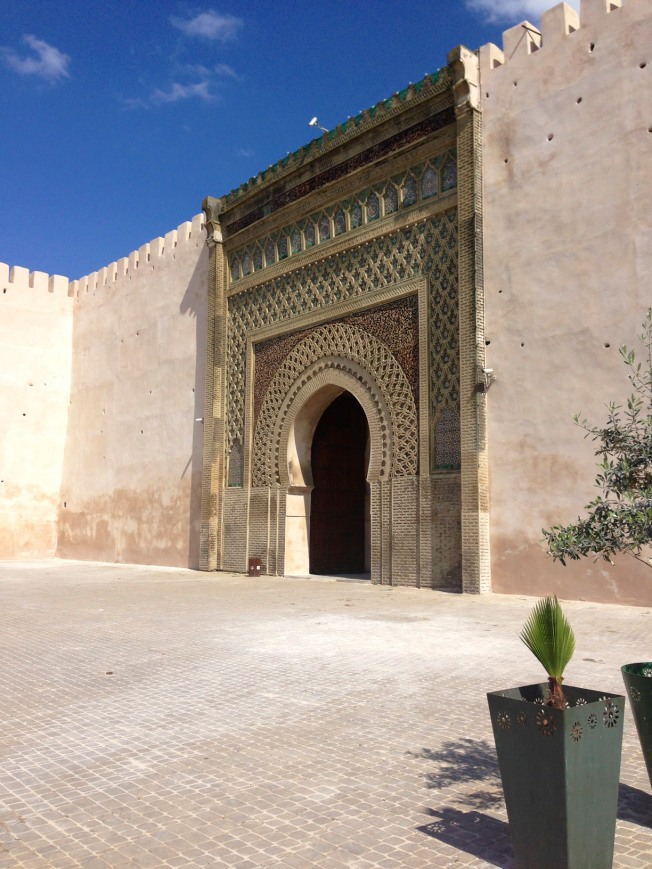 Place el Hedim is similar in some respects to the Djemma el Fna in Marrakech. The square takes on a different life in the evening as street entertainers including snake charmers draw crowds around them. One side is lined with open air restaurants with an indoor food market behind. At the far end of the square is a green roofed palace and large tiled wall with, now redundant, water pipes.

The indoor food market was a dazzling display. Many of the stalls were enhanced by beautifully hand painted alcoves and intricately patterned boards. The food displays themselves were a sight to behold. Stopping at a butchers stall a young lad demonstrated to me how he could, with some force and a big smile, remove a tongue from a cows head. 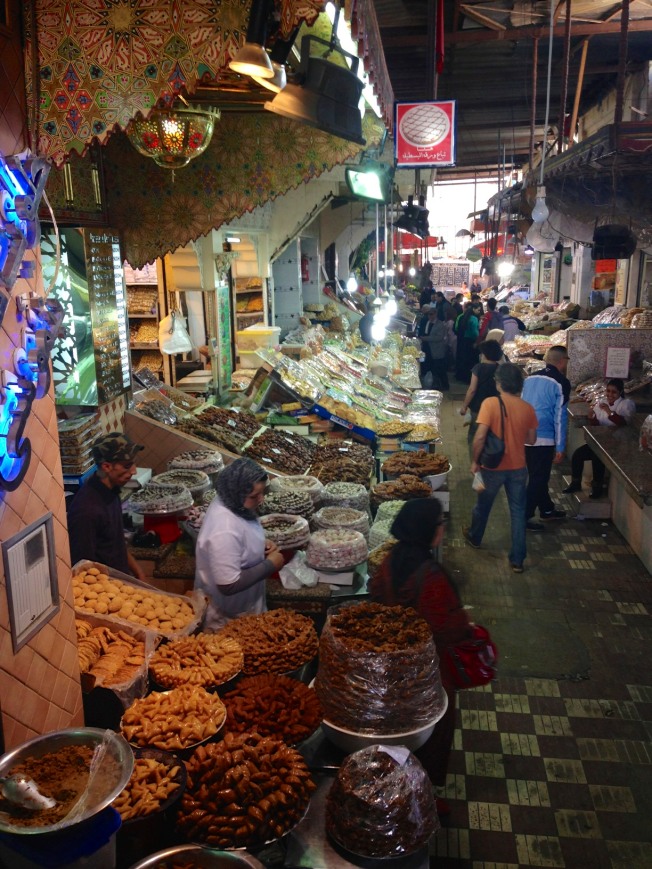 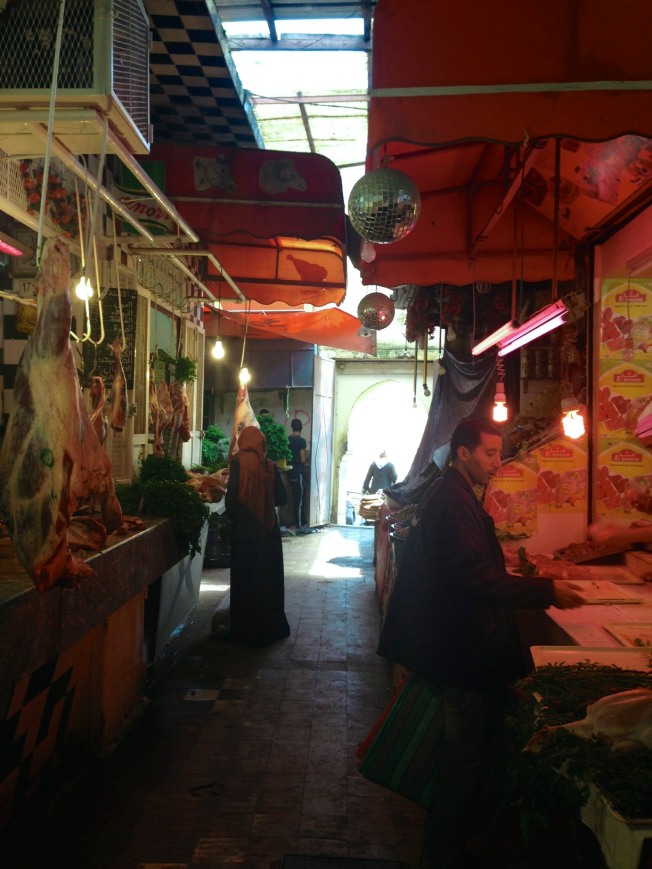 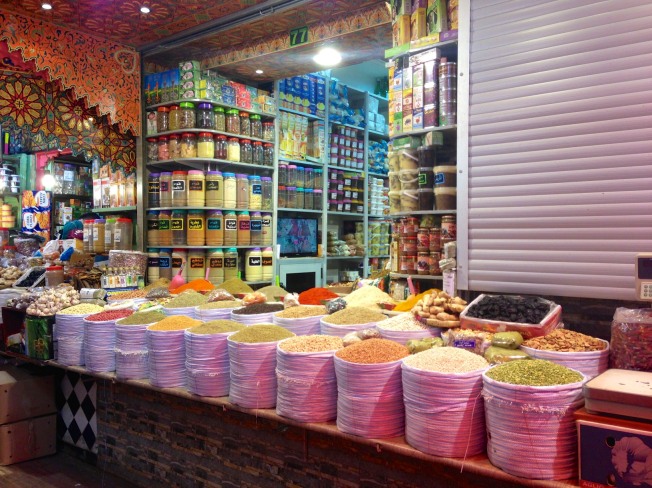 Beyond the food hall and back across the main square past the mosaic tiled wall I entered the narrow passageways of the Medina to try and lose myself. Quickly I happened across the entrance to another ‘Bou Inania Medersa’ which was open to non- moslems on the payment of 10 dirhams. It was quite similar to the one I had seen at Fes and had been built around the same time  (1340-1350). Despite being built by his predecessor Abou el Hassan it also, like the Fes Medersa, took its name from the Sultan Abou Inan.

Apologies for the large number of photographs shared below but it was a very interesting place to visit and the detail is quite amazing. It was possible to walk up stairs to the first floor and look inside small cells  which provided simple prayer rooms with windows onto the courtyard below. Another flight of stairs allowed visitors on to the roof. The  ribbed domed roof in the panoramic photographs below is quite unusual and unique as an architectural feature in Morocco. 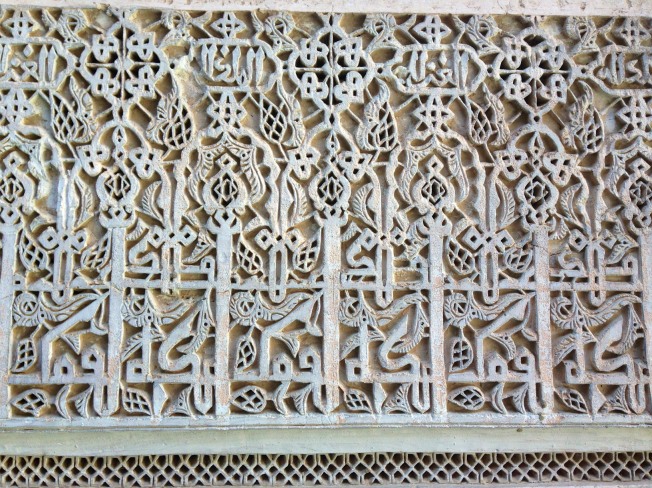 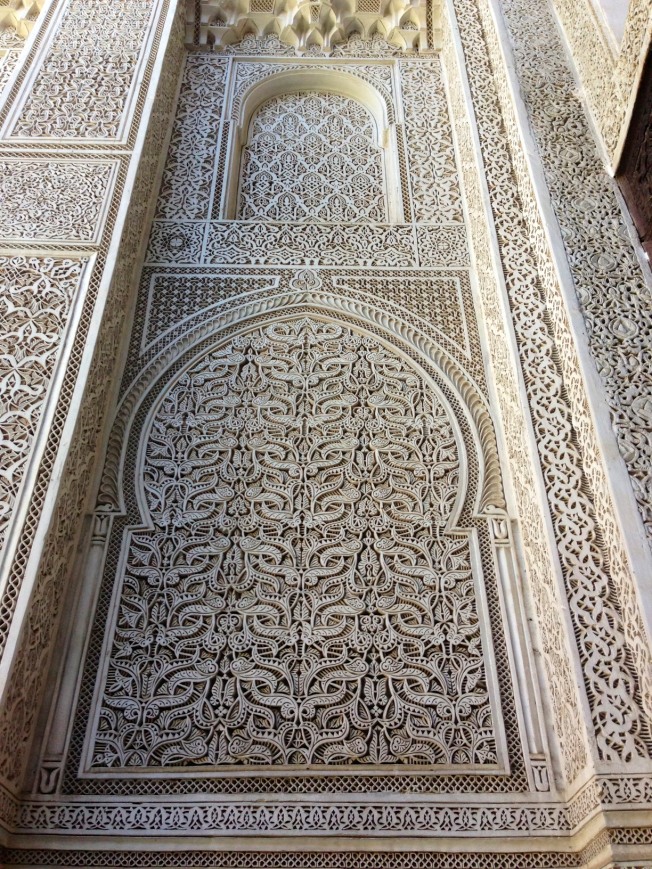 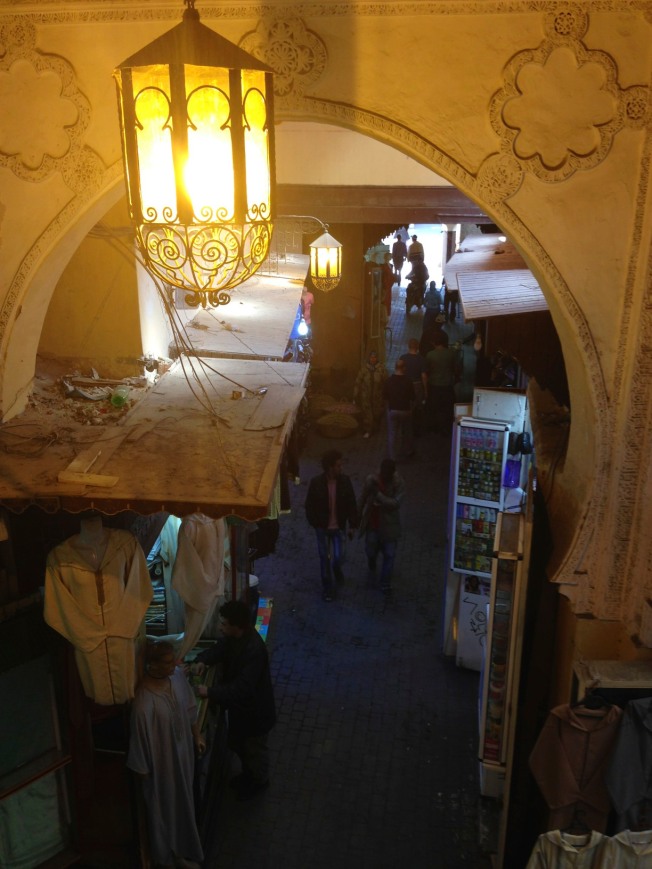 The open area behind the main wall and gate of Bab Mansour provides an inner courtyard area (Place Lalla Aouda) with plenty of trees and seating. I took a gate through the next main wall and made my way beyond the Eastern wall into a more modern Meknes.  Trying to get back I became quite lost in the maze of passageways and dead ends but was quickly pointed back in the right direction. 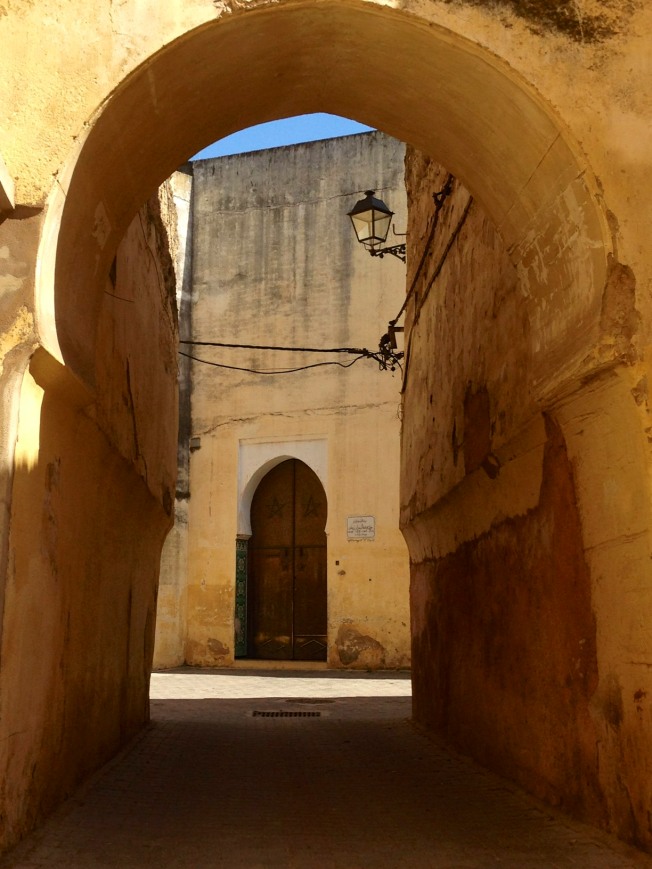 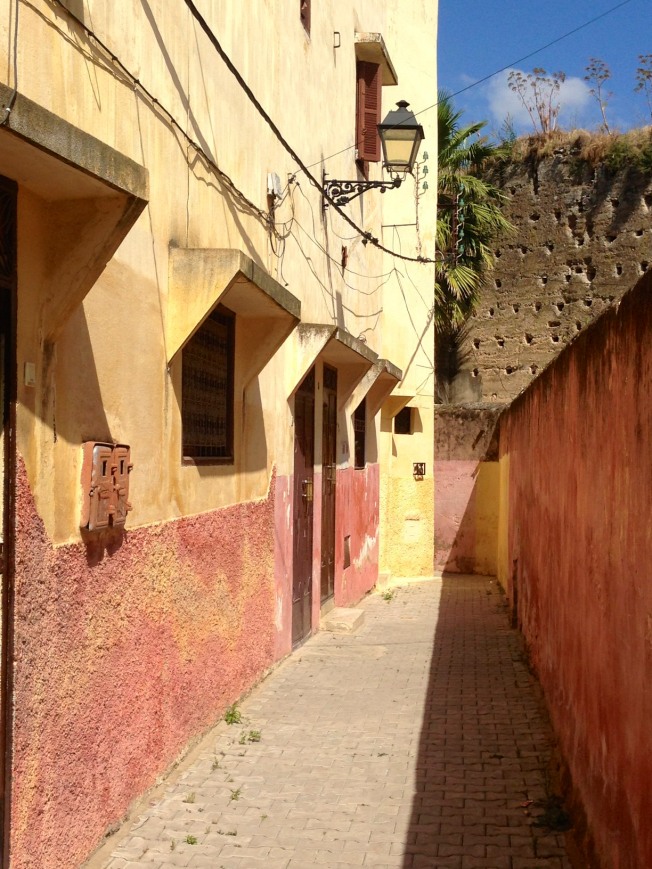 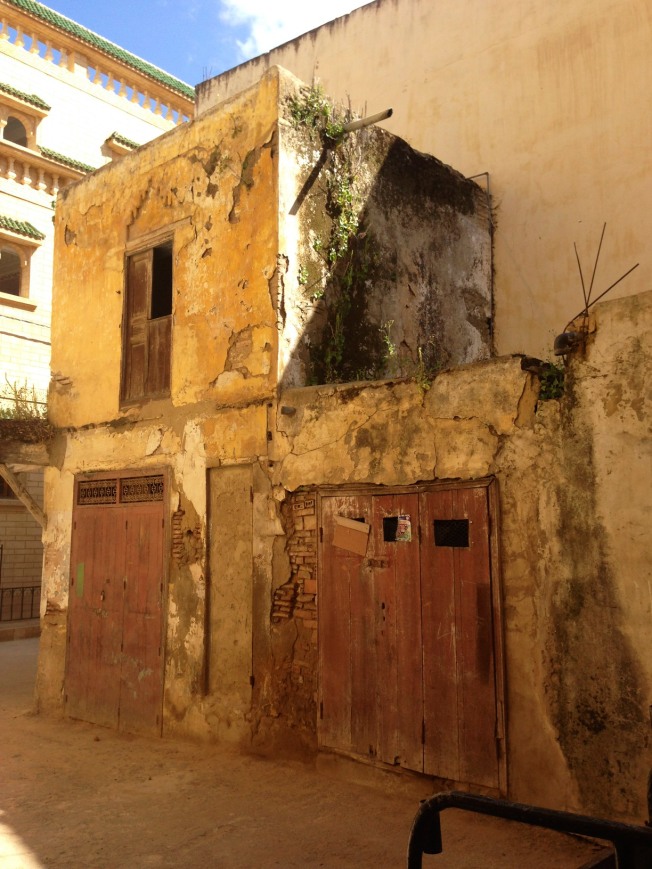 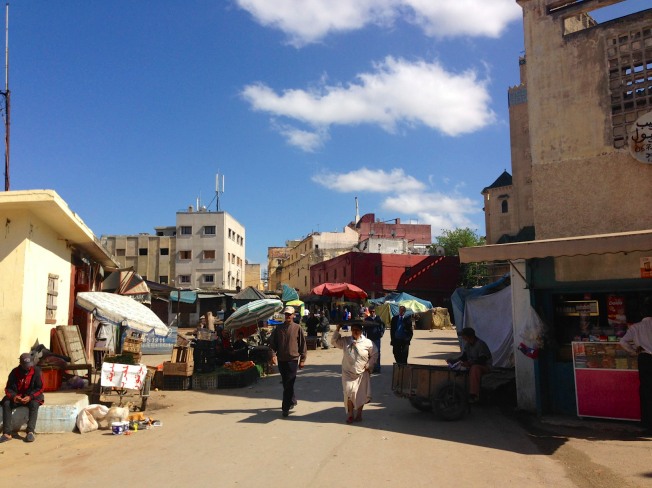 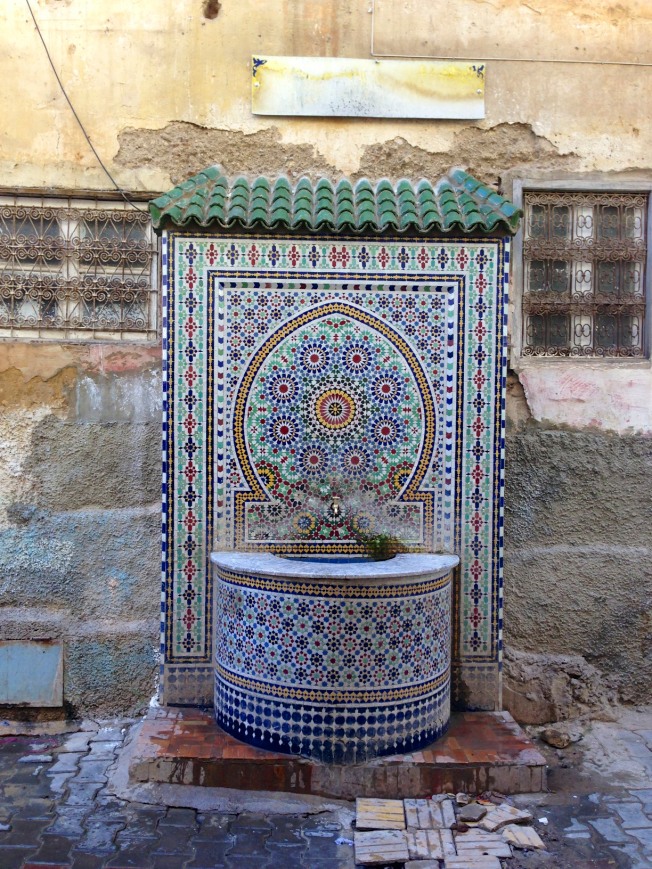 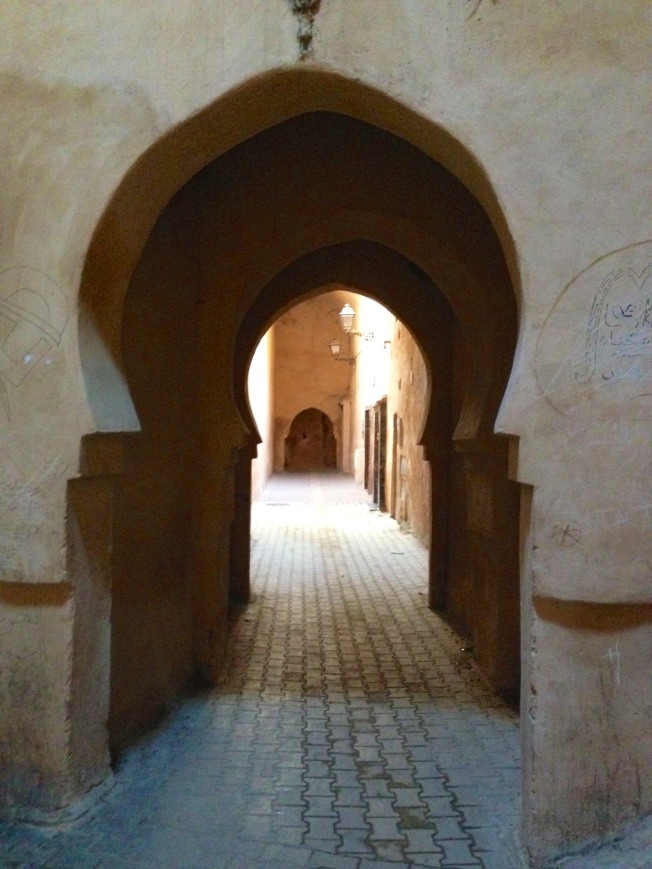 On arrival in Meknes I had found one of the cheapie hotels listed in a guidebook. The Hotel Regina is on the heavily congested main road leading up to the Bab Mansour. A very helpful young chap provided me with a ground floor room. I looked at it quickly and although spartan to the extreme thought little about it before setting off for my afternoon walk around the old city. On the way back I had a delightful meal in a cheap local cafe. 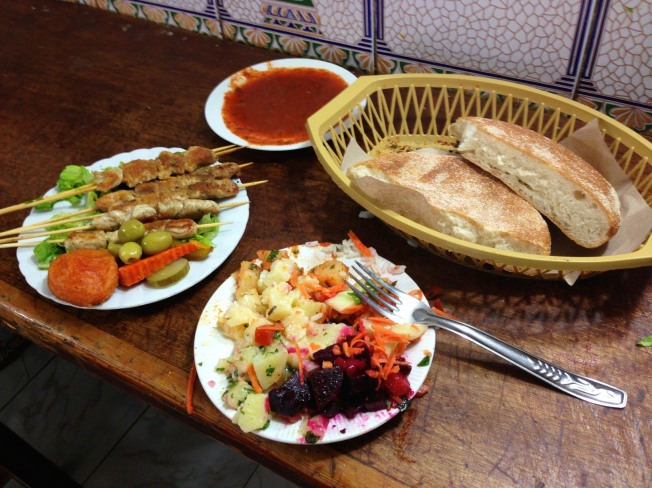 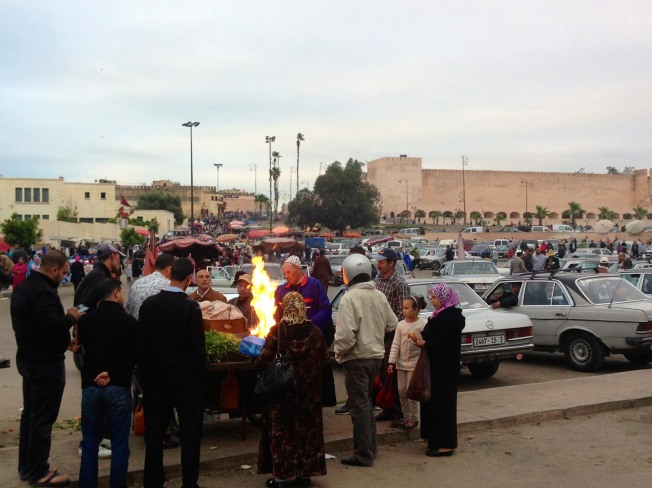 Once back at the Regina hotel I realised that conditions there were much worse than I had initially thought. There was no real security. There was no electricity or light. Both the window and door were unlockable from the inside. It was, in effect, a  prison cell type room with little to recommend it. I have become a little less keen on such arrangements since I was a victim of an attempted robbery (and stabbed) in what I thought was safe accommodation visiting Bir in India last year. I asked for another room. Nothing was available so I trudged off to find another place despite it getting quite late. The Maroc Hotel nearby was the answer to my prayers. I was able to leave my bike in a central courtyard (with mature orange tree) and was provided with a wonderful room at the same price (100 dirham) as the ‘hole of Calcutta’ Regina Hotel.  I was in heaven and slept like a log. After a hot morning shower and a good breakfast in the ground floor lounge I packed up my kit.. The R705 West led uphill past the old walls and  ‘grand taxi’ rank of Mercedes saloon cars.  It was a brief visit but I liked Meknes; its relaxed convivial atmosphere and genial people. 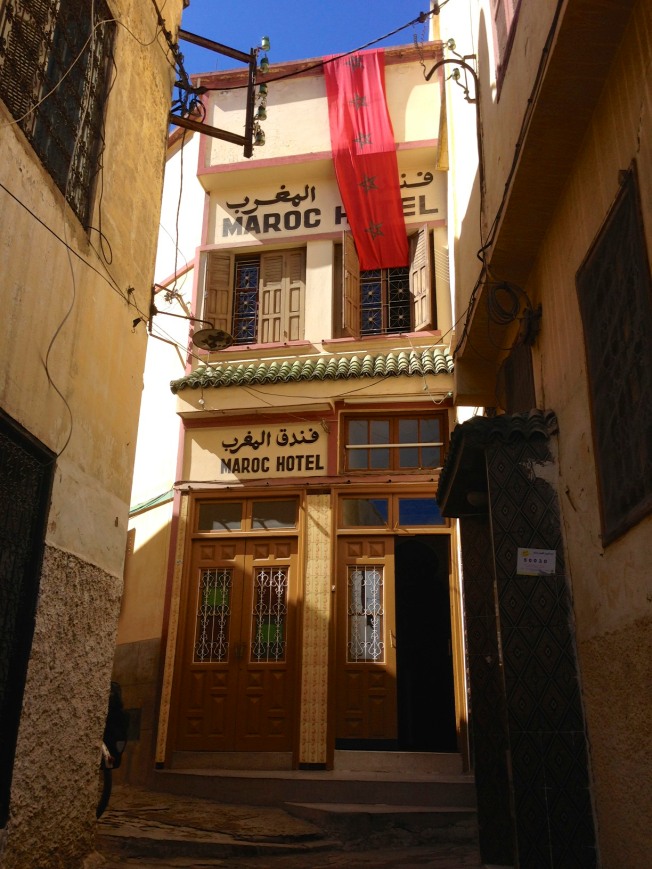 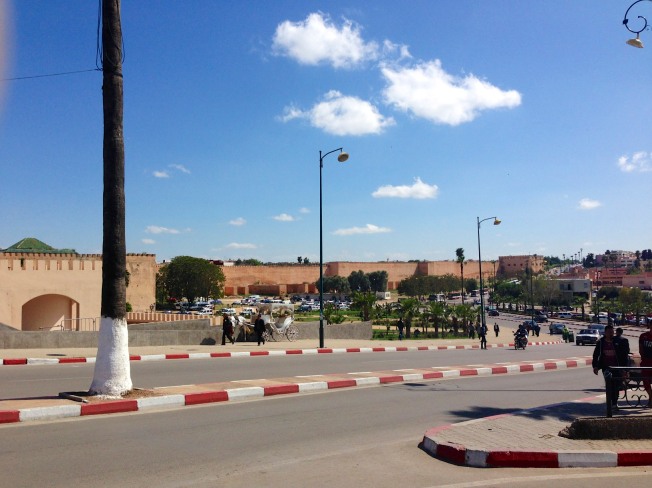