Kashmir is a sensitive area following many years of violence between national forces and insurgents.
Like Jaffna in Sri Lanka there remains a large military presence or ‘security force’. This is reflected in special considerations for traffic. It is possible to bring hand luggage on an incoming flight but not permitted on an outward journey which suited me fine.
On arrival I had to fill in an elaborate form registering my stay. I became a little stuck on providing a local address. I looked on my phone for one if the places I had bookmarked on the Internet. My mobile phone connection was dead even though I had an Indian sim. Apparently, and as another security measure, prepaid accounts do not work. After a brief chat with a police official who conferred with a colleague I was told it was mandatory. But then, and somewhat quietly, I was waved through.
Happily the bike had survived the baggage handlers. Hooray! I put everything back together with the usual audience and then joyfully exited the arrival terminal. Immediately past the doors another policeman took my details and was a little frustrated that I had no forwarding address. At the same time I had touts for house boats talking at me. It felt like a set up. Once I established that I was actually talking to a policeman and that these guys were not his friends I was able to slip away on my bike into the blazing sunshine.
The road from the airport ran nicely downhill and I set out to find the lakeside hostels. I was taken aback by the wonderful view of the snow capped mountain ranges which sandwiched Srinagar.
My ride to find Dal Lake became my first, albeit unintentional, tour of Srinagar. My route led me to the Jama Masjid mosque with its fine spired towers. Architectually quite unlike any mosque I had seen before and although modern, it would not have looked out of place in Nepal. 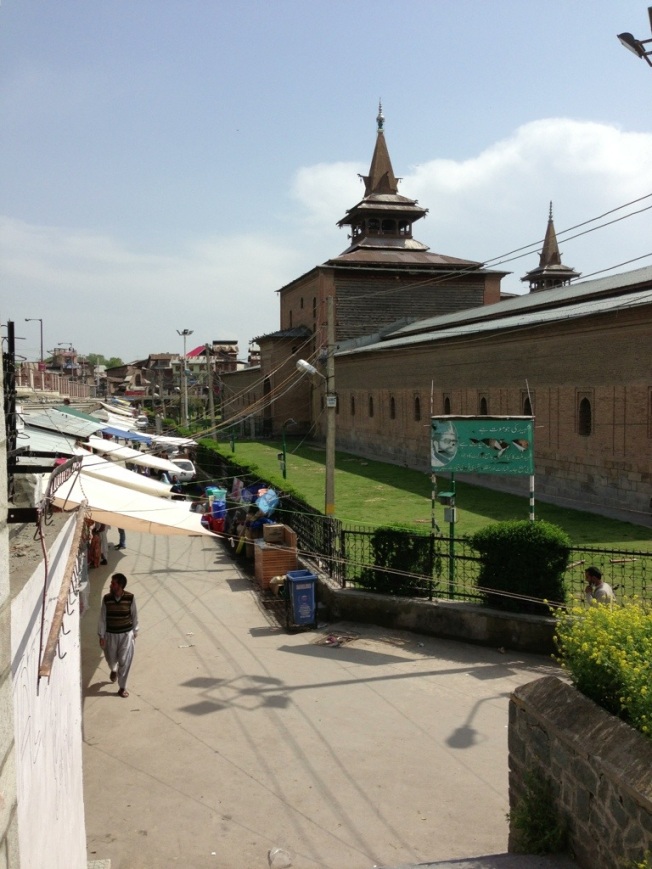 Turning back towards the lake I was presented with a inspiring view of the Ladakh mountain range.

Oddly my unplanned route then took me through the communities that lived in wooden houses on stilts on Dal Lake.
I was directed further into this water world town until finally I reached a long path that stretched eastwards across the middle of the lake.

Finding accommodation was not an easy task. I worked my way along the Boulevard and circled the main tourist area with its multitude of houseboats and floating palaces.

I settled on a room in a cheaply constructed lakeside hostel and which had one room set aside that combined a lending library with a crafts shop.

I set out to find better, more secure, accommodation and get my bearings.
Dal Lake is wonderful although its natural beauty is somewhat spoilt by excessive tourism. 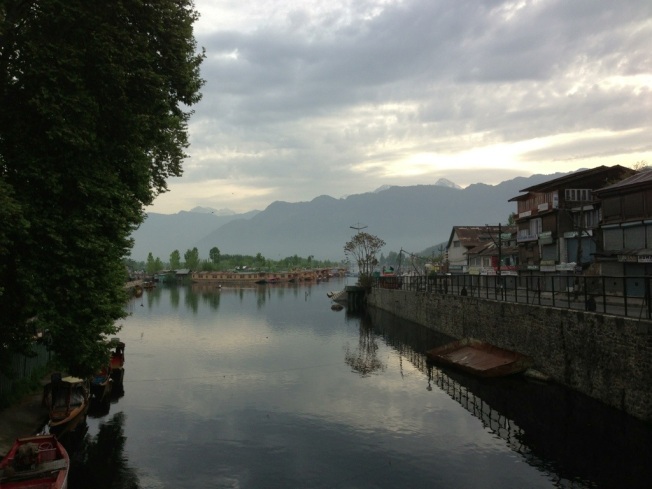 I found the Humza hotel on Old Gagribal Road which runs parallel to the lakeside Promenade. It was reasonably priced and offered secure, private accommodation with a pleasant secluded garden and ‘wifi’.

Behind the hotel is the forested Shankaracharya Hill and I climbed it for views of the lake and surroundings. 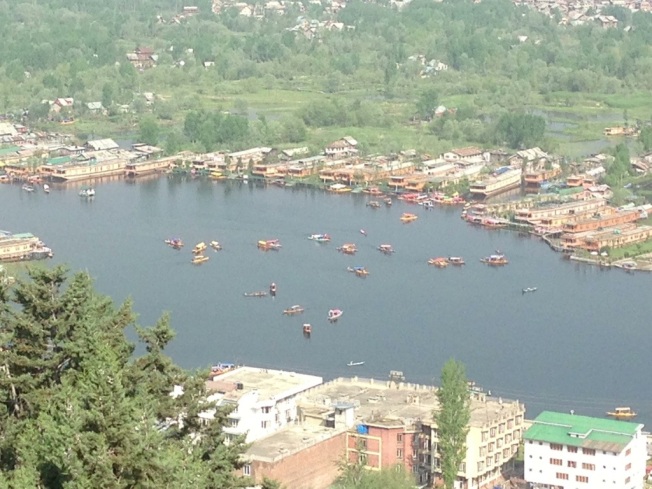 I cycled to Ganderbal on the Leh road. It was a great ride over 40kms total that went through old Srinagar city to the West of Dal Lake and North reaching the Indus River. I took a slightly different route on my return following the Indus River for a short while and then visited the villages on the high road to the East of Dal lake. It was fun to stop at a local fair with Kashmiri families and I gave a talk to a crowd of children about my bicycle and journey.
> 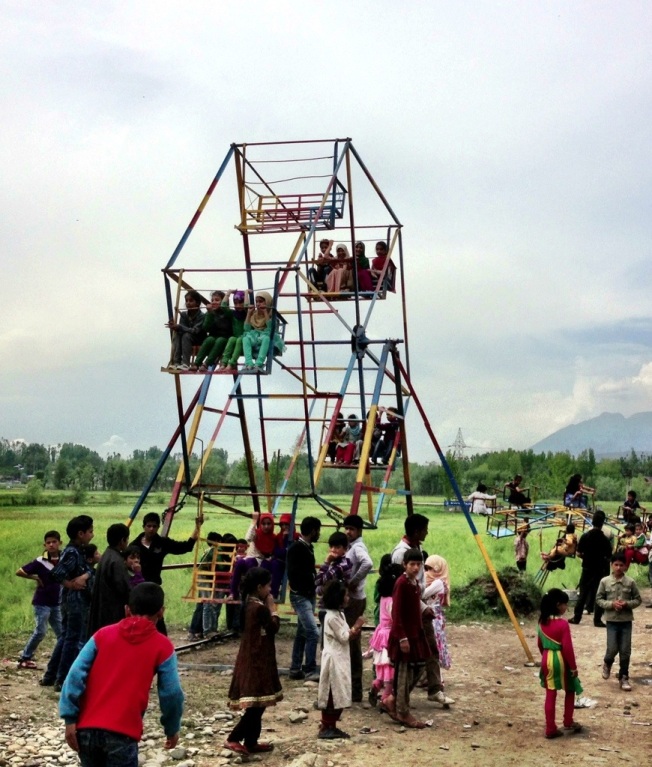 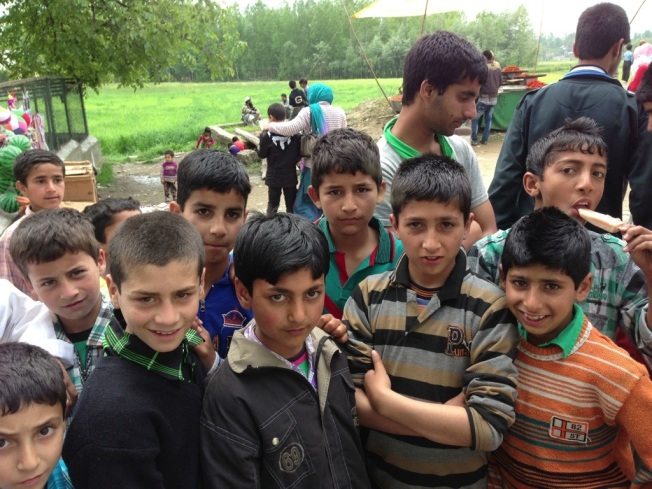 Another day and following a circuit of the lake I visited the Tulip Garden situated on the East side. During March and April the blooming tulips are a big draw for visiting Indian tourists. I must say I was less than impressed but the combination of mountains and flowers is very attractive. I also had a pleasant lunch of samosas and a flat bread with a sweet yellow filling provided by a local village food stall. 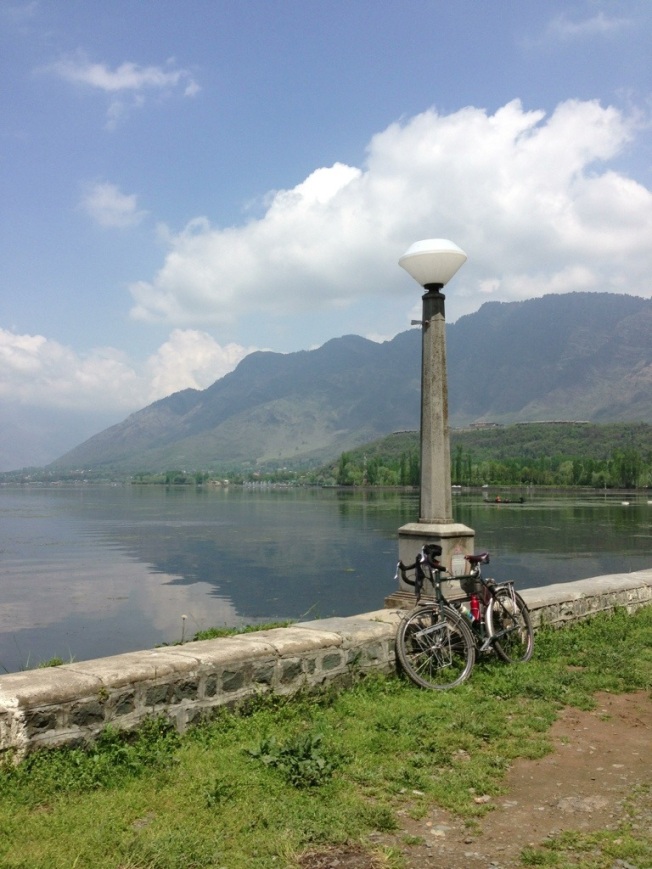 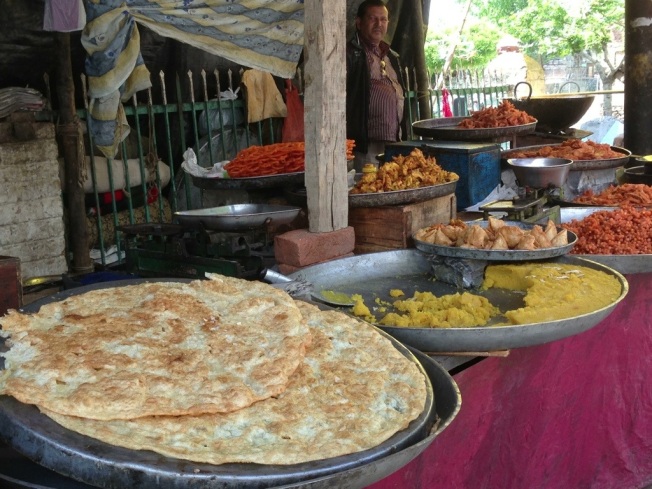 One highlight of my stay was a visit to the Sikh temple in old Srinagar. I was invited in to view and covered my head accordingly.

I regularly ate at a kebab stall at the Western end of the old Gagribal road. It was incredibly cheap and very good. The street itself seemed as if it had been there forever and had many small wooden ‘lockups’ with artisan and shopkeepers plying their trades. At one I bought a live chicken by weight which was killed and skinned before my eyes. It was the freshest chicken I have ever bought. Another shop provided me with cheese and lassi drinks on a daily basis. 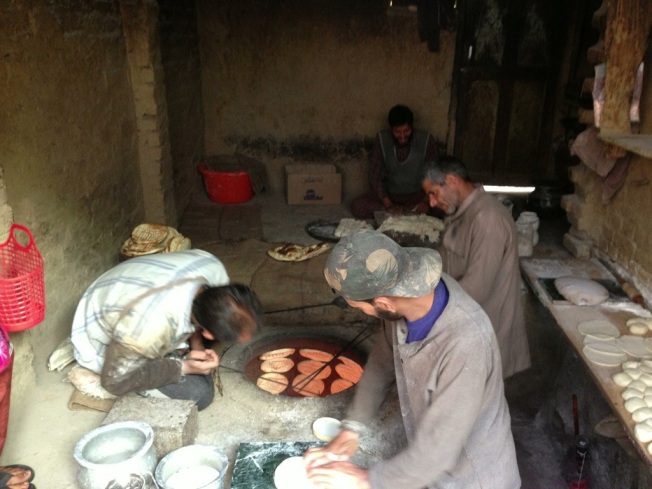 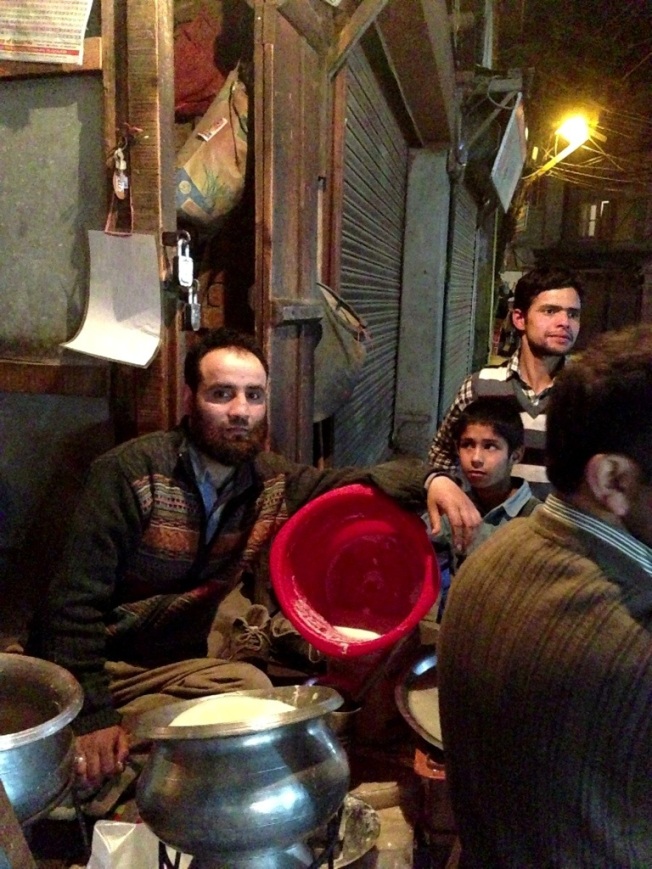 I had arrived at Srinagar with the intention to cycle to the remote city of Leh to the East. The road is a spectacular route that cuts through the Himalayas. However the road and which is the highest in the world, is subject to weather conditions. It is closed for most of the year. It was cleared and opened early this year. However a major snowfall (over 10m) made the road impassable to all. I moved to ‘plan B’ and decided to cycle South through the Kashmir valley.
Although not exhaustive I did manage to visit many parts of Srinagar and enjoyed the generous welcome provided by many local people and made some good friends. The lakes with their Shikaras (water taxis) are very beautiful and are the star attraction of any visit to Srinagar. Despite this I am not sure I would revisit as the city itself is not too attractive and the tourist areas too commercially developed to suit the tastes of the (mostly) Bengali tourists. I only saw one other ‘westerner’ during my stay and despite a calm peaceful atmosphere it would appear Kashmir still has a reputation as a potential hot spot for ethnic violence. I could see comparisons with Northern Sri Lanka. Both have beautiful scenery and warm friendly people. They are now peaceful and beyond the previous problems that plagued them. There remains, naturally, many people who cannot forget the terrible crimes committed against them and their families. I talked at length with people badly affected by the violence. Large numbers of armed soldiers everywhere do not help the process and are a bitter reminder. But both areas remain in the grip of more than a little nervousness by their respective governments and military forces are keen to do a job. Hopefully time will heal and the soldiers will be replaced by tourists with credit cards rather than guns. 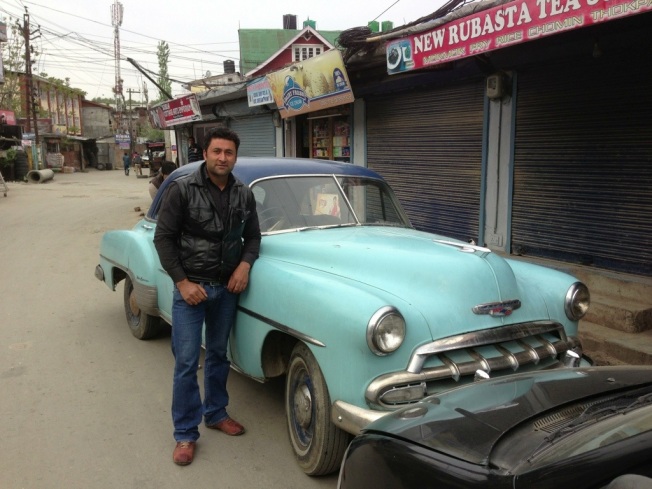 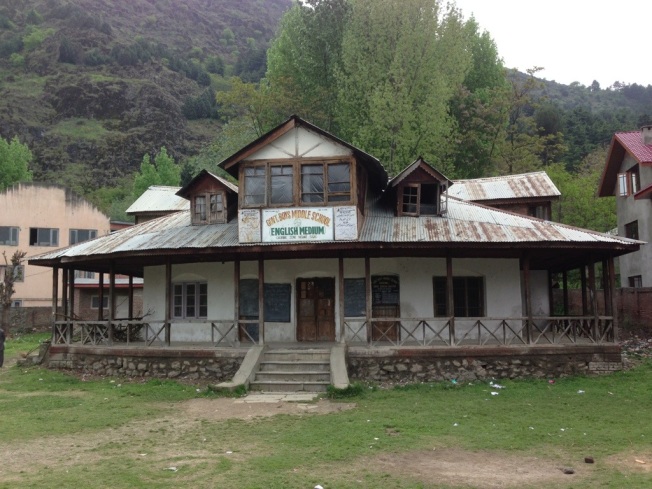 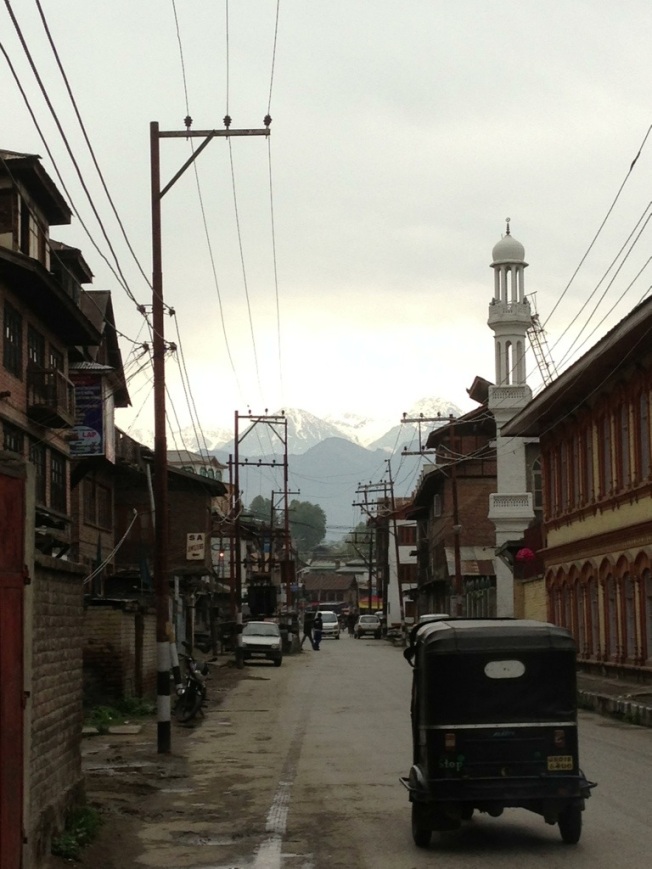 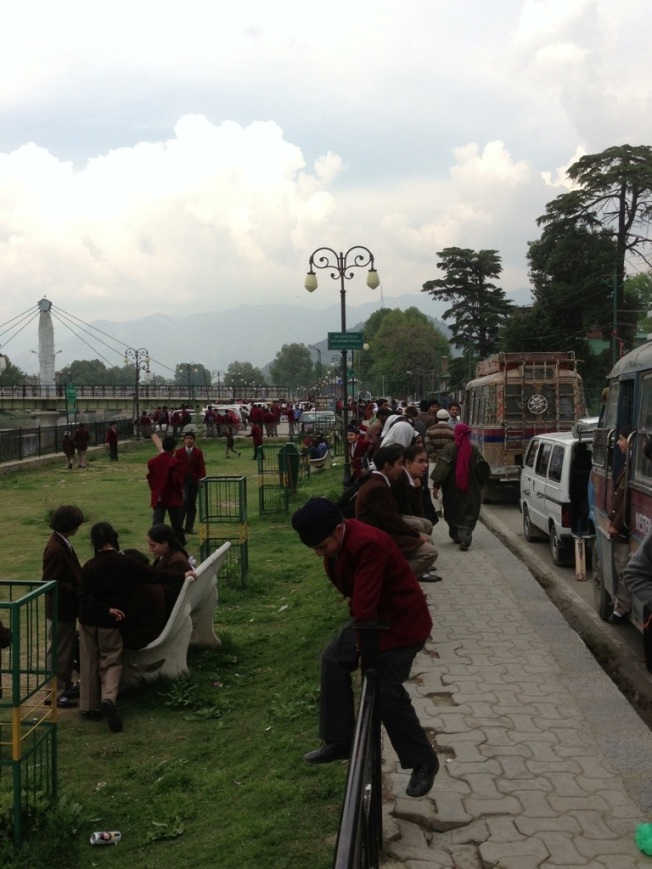 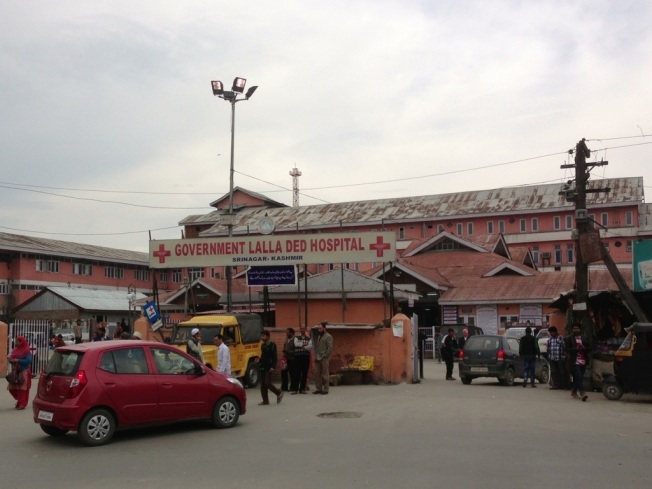 I thought I could just head towards Leh ‘for the hell of it’ and regardless of the road closure. But after procrastinating for far too long I finally decided to hit the road South. This had, in itself, some attraction. The Kashmir valley has a reputation as the garden of heaven. Also the wifi had died at my hotel. The mains electricity then failed following a transformer fusing in the street which left only basic lighting. Hot water then became hit and miss. Everything was going down the pan. These factors contributed to my decision to get my act together and get back on the road to pastures new…