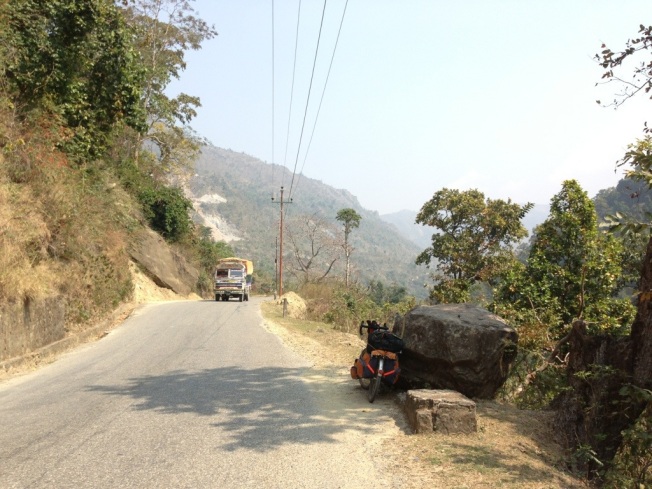 I should not have worried. The cycle ride along highway 10 was not too arduous. My fitness was good and I soon arrived at the valley beneath the hill station of Tansen or Palpa as it is better known. The journey itself was magnificent with amazing views of spectacular scenery. The final section of the ride was downhill and took my breath away. It seemed to last forever.

On the outskirts of Tansen I saw men bagging up vast amounts of fresh ginger. I was told it was destined for India. They welcomed me and gave me an inordinate amount of ginger! I gave some back and to a woman at my next tea stop. 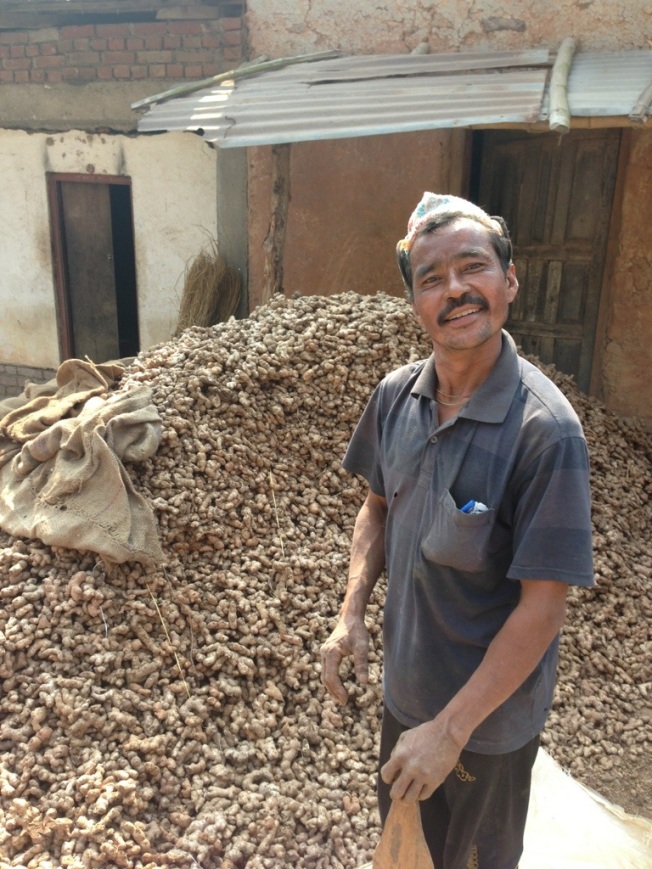 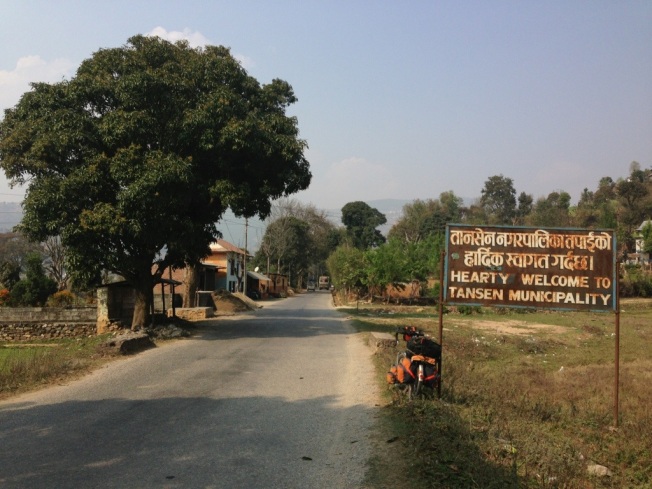 Completing the climb to Tansen was quite an achievement. The town stands close to the the crest of a hill overlooking a valley with magnificent views all around. I took one short break for tea about half way otherwise I made it up in good time. Having conquered the hill I was as pleased as punch. I continued further up into the town looking for the fabled ‘homestay’ that travellers rave about. Seeking advice I was directed down what seemed like the steepest road I had ever seen. At the bottom a bookseller said I was heading in the wrong direction and pointed me back up the same steep road!
The town itself is a fair size and consists of lots of small roads and passageways. There are steps leading up and down everywhere. People of all ages appear to take it all in their stride.
The Palpa people are fit. No wonder their army almost conquered Kathmandu.
The homestay I wanted, which also doubles up as the local tourist information office, was fully booked. However Mo Mohan; the charismatic owner teamed me up with a German tourist (Anna) to share a triple room in another homestay nearby. The family were fine with me putting my bike on the first floor balcony and Anna was happy to have her rent halved.
The town boasts of several magnificent temples one of which was extended as a reward and celebration of the defeat of the British army. However this pales in comparison to the Amar Narayan Mandir which has a three tiered roof, is exquisitely carved and possesses some particularly graphic detailing on the lintels. This may possibly be the reason photography is forbidden. I discreetly stole a few shots. 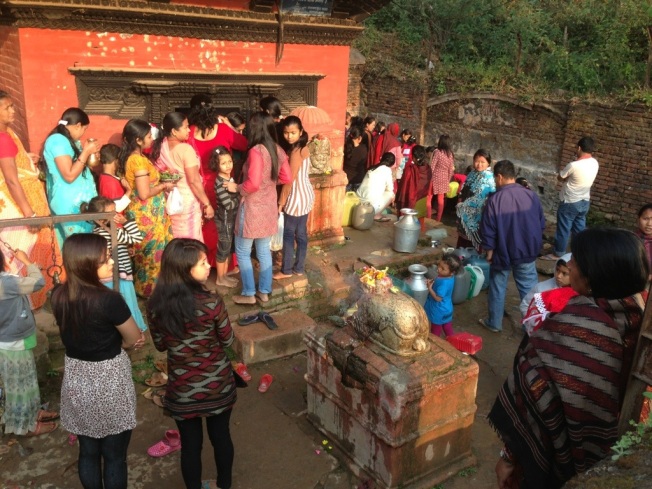 The following day I was able to move into a room on the first floor of Mo Mohan’s oversubscribed Homestay.
It was ideal and I had my own little balcony. The hot shower was superb and the roof garden had fantastic views over the town, valley and of the surrounding mountain range. And it was really very cheap… I decided it was perfect and to stay as long as I could.

I set about walking the town. On the Shreenagar road was a small shrine with a fair crowd of people around it. It transpired that they were making preparations for a festival devoted to Shiva. There was a large cauldron of milk into which was being stirred various spices and ‘substances’. One was a small red fruit that supposedly had a psychoactive content. Another was a large bag of green dried cannabis. I was asked to help stir the ‘shiva cocktail’ and invited to the festival starting in the afternoon. The mixture was decanted into large urns and I was given a beakerful to try. My day then became increasingly interestingly as the potion was quite powerful. In effect I was as high as a very colourful kite!

Wandering the town I admired the Newari architecture, found even more temples and stopped to photograph some chickens. I returned to my room, contemplated the universe and set off to meet up with my festival buddies at the shrine. I heard about a Fair in the lower town which some tourists had visited the evening before. The only people at the Shiva shrine were the elderly organisers and who, apparently, had been drinking the festival potion all day. They gave me another cup of the magic medicine and told me that the big party would be happening in the evening.
I set off for the fun fair met some other tourists I knew on the way and told them of the later festivities.
By the time I arrived at the fair and paid the entrance fee I was feeling a little light headed. The event doubled up as a trade fair and people were funnelled past stall after stall before finally reaching the fun fair. 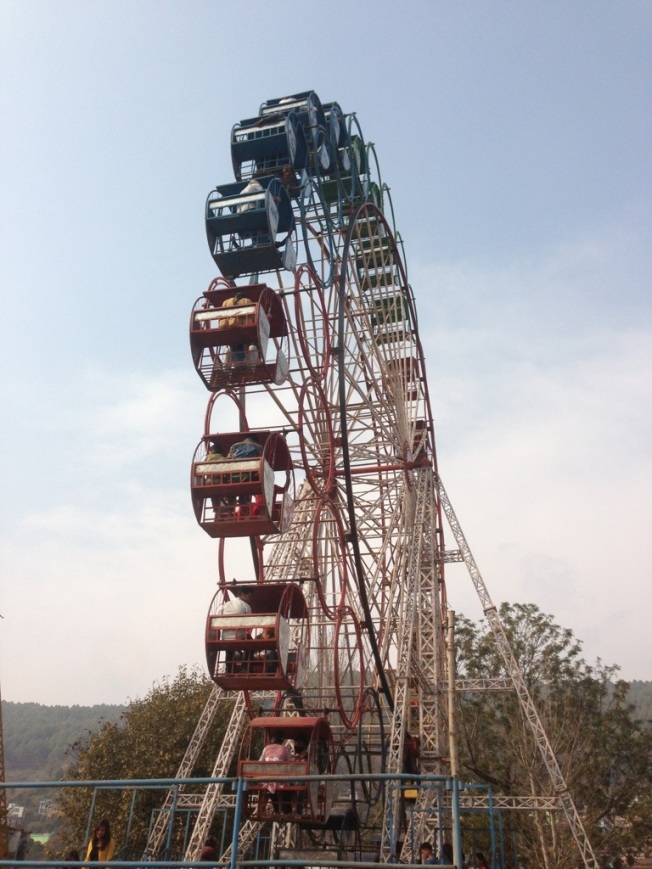 As dusk fell people lit bonfires in the streets and the glow transformed the town. The party at the shrine was in full swing with music and dancing. Crowds of fashionable youths gathered waiting for each urn of milk to be brought out and shared. The music flowed from the sound system above the shrine, a large fire raged and local people of all ages danced until late. As a party it was a great success by any measures. Once again it was a privilege and a pleasure to be a welcome guest in the local community. It was quite a day. 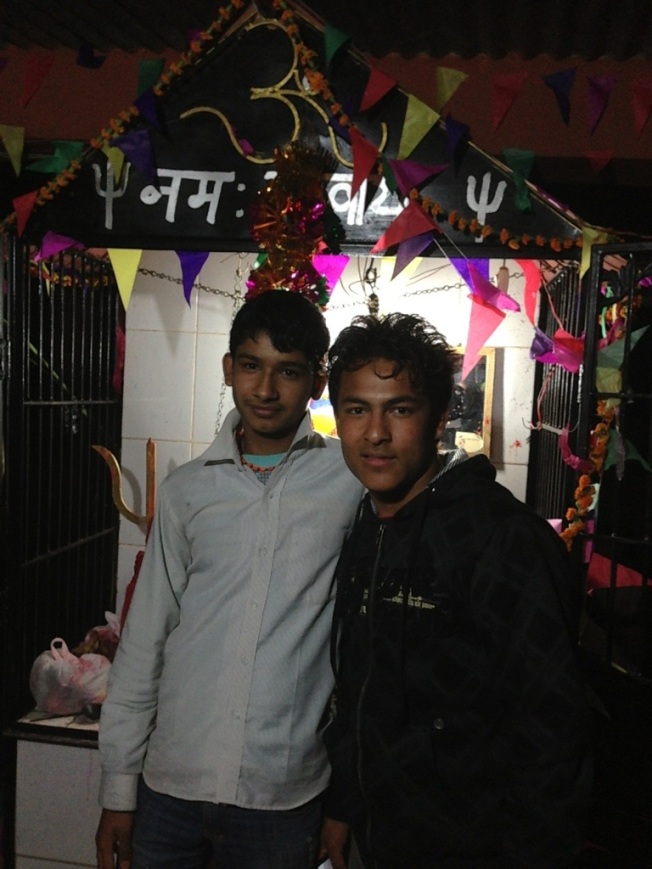 Apologies for the low light blurred pictures and which are fairly representative of my own slightly inebriated state.

I took an early morning walk to view the ‘white lake’. The mists create a veil over the valley and give the impression of a lake.

Anna phoned me and asked if I would like to accompany her on a ‘trek’ to visit a palace situated to the North of Tansen. Aside from my own exploratory walks this was to be the first recommended tourist ‘trek’ or walk. It was fun to have a companion and we enjoyed excellent views on the way. Anna, who was a qualified ski instructor, made a great guide and practically led the way according to the printed instructions that she had. 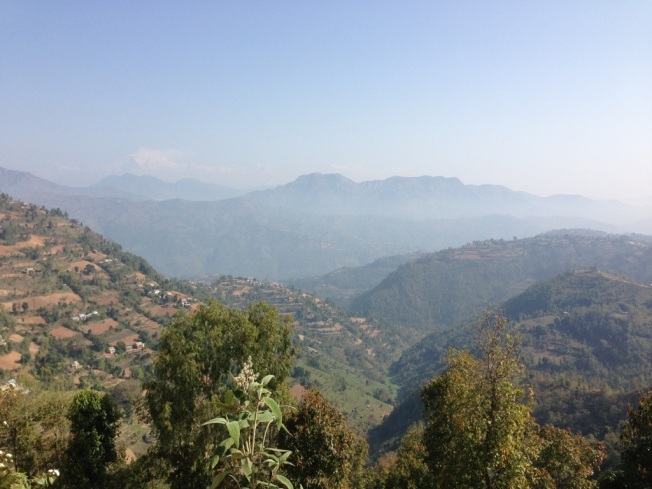 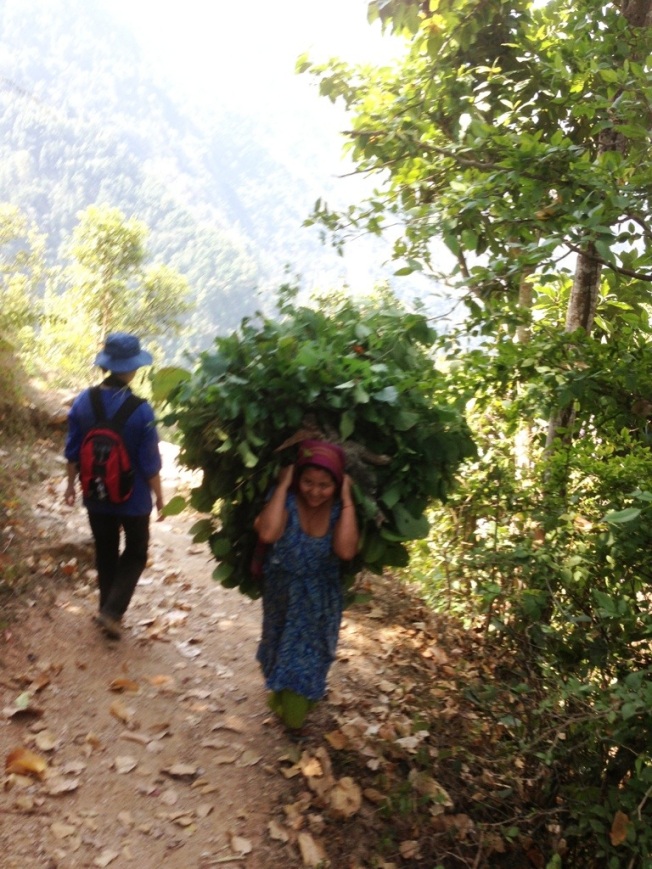 The Ranighat Durbar or palace was built in the late C19th in memory of a Nepali politicians wife. He was exiled for an abortive coup against the prime minister and the abandoned palace was soon stripped of its contents and stands empty in beautiful natural surroundings. The building itself has recently been renovated and is in a good condition. 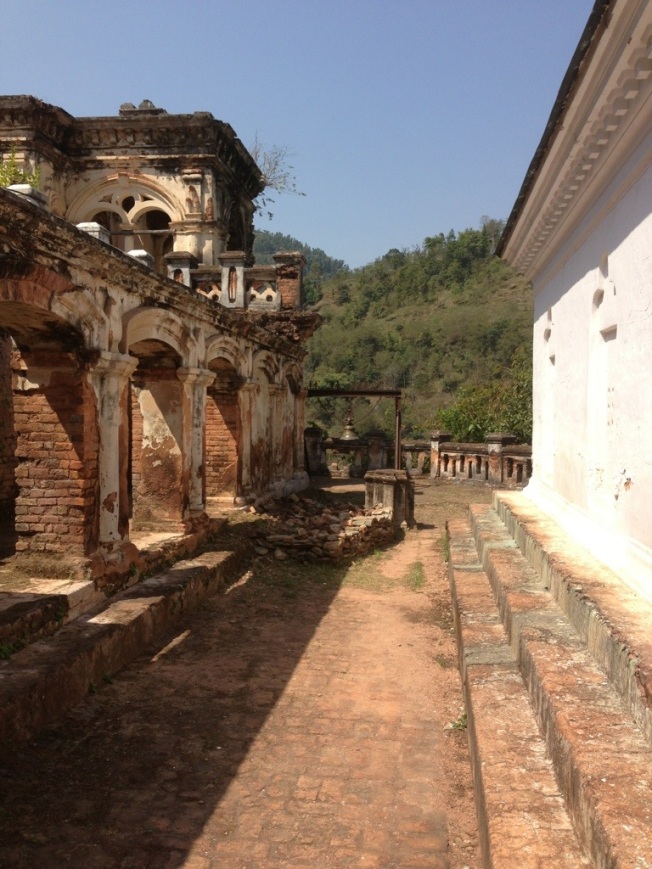 Somewhat misdescribed as the Nepali ‘Taj Mahal’ the story behind the palace adds a little intrigue to the visit. Despite poor access links I feel it would make a wonderful retreat for meditation and yoga.
The return walk took a little more effort but provided good exercise and great views. I am grateful to Anna for an enjoyable days ‘trekking’. 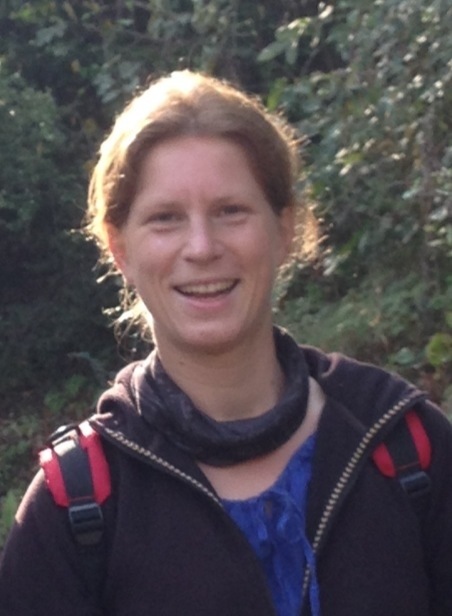 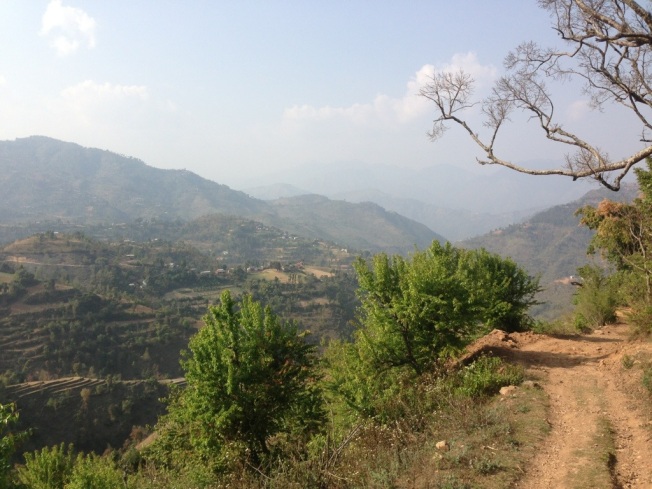 Tansen is a great place to stay with very friendly people. It has a unique flavour of its own and as a tourist destination has, no doubt, a special place in the hearts of those that have visited. My own stay was cut short as I would have liked to stay longer. But my room had been booked and Mo gave me excellent advice with regards to the best route towards Pokhara. In some respects this did me a favour. I needed to keep moving, get my arse into gear on the bike and tackle the hills ahead.