Dharamsala at Kangra consists of several quite different smaller districts: lower Dharamsala, McLeod Ganj, Forsyth Ganj, Dharamkot and Bhagsu. Although all are set closely together around the central forested hill and apex of the Dalai Lama temple they are remarkably unique in character.

It is a sprawling combination of different ethnic groups, businesses and seasonal visitors. The Tibetan settlement at McLeod Ganj with the associated Buddhist temples and monastery dominates the area. BhagsuNag to the East provides a busy and somewhat congested Indian resort. Visitors are attracted to its waterfall. It has an ancient shrine devoted to Shiva and rebuilt following the devastating earthquake of 1905. To the North is the Judaic settlement of Dharamkot. This leafy suburb is infused with therapeutic centres catering for discerning visitors. The roads and buildings are built to a high standard. The atmosphere reminded me a little of Hampstead village in London. It has many beautifully situated ‘trendy’ restaurants and cafes and retains a certain charm that attracts the more discriminating visitor.
On its West side is the Tibetan centre for performing arts, a meditation centre, forest Stupa and regional centre for mountaineering. Forsyth Ganj lies much further to the West and is connected to McLeod Ganj by a busy main road. Along this road lies St Johns Church with its typically British cemetary and where many servicemen and their families are buried. To the rear of the church is a memorial to Lord Elgin who was Viceroy and Commissioner to India.
There is, in my mind, a clear division between the areas in terms of ethnicity and reminded me of certain areas of North London where I used to live. The lower area is predominately and typically mainstream Hindu Indian. Beyond this area and some way up the steep hill McLeod Ganj has been transformed by tourism and the Tibetan community into a modern cosmopolitan world. ‘Little Lhasa’ or ‘Dhasa’ represents the Tibetan government and capital in exile with a matching infrastructure and is an important place for Tibetans everywhere. Monks pass through the streets clutching their prayer beads and the latest smart phones. There are a multitude of hotels, restaurants and shops many with an ‘alternative’ and ethnic theme. It is a good place to eat Japanese or Tibetan food, sip herbal teas and align your chakras before enrolling on a course for meditation and yoga. The resort is the perfect destination for ‘new age’ tourists, pseudo-intellectuals, artists and writers. For the hipster sons and daughters of the well heeled it is also a very cool place to relax with other travellers and smoke a little dope. I also get the impression that for some visitors their main spiritual satisfaction is from bottles. There is a constant stream of wealthy international tourists seeking to awaken their spiritual consciousness and improve their health. There is, naturally, a deeply seated resentment by the indigenous Indian population particularly of the Tibetans.
All of these areas are seasonally transformed into the equivalent of a busy city by rampant tourism and is reflected in escalating values. The road traffic is awful and totally at odds with the small narrow streets of a British 19th century hill station. The temperature is pleasant and offers a relief from the burning heat of the Indian summer.
The surrounding terrain offers excellent opportunities for trekking into the mountain ranges to the North. It is also quite the perfect place to enrol in spiritual or therapeutic courses. Many people find work there as teachers or volunteers. There is a real wealth of local services focussing on most areas of healing and health issues. It is big business and prices have risen rapidly in recent years to meet the increasing demand. General shopping is expensive and items often priced higher than their European equivalents. It seems as if items are loaded with a tourist tax. On the up side there is a good availability of foods and products.
Further afield surrounding forests and mountains provide a wonderful and magical refuge from the human jungle. My room provided a comfortable pied a terre at the fulcrum of McLeod Ganj or Dharamsala. However it was noisy (dogs and car horns), dusty and suffered a little from its busy central position. The countryside beyond the inhabited suburbs of Dharamsala provides real peace and serenity and which is, rather sadly, becoming lost from the whole area with the increased traffic and unbridled development. 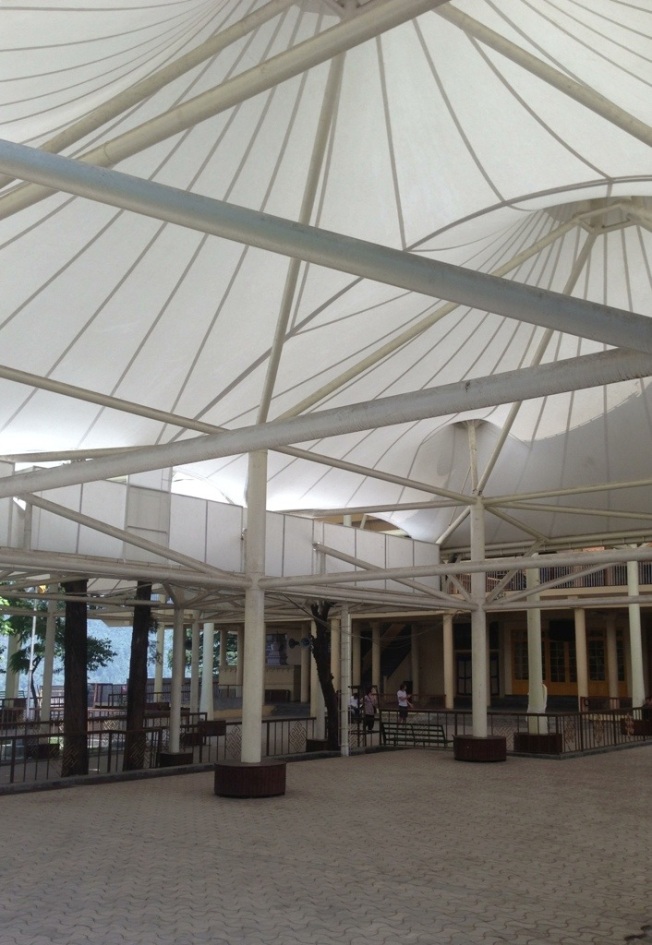 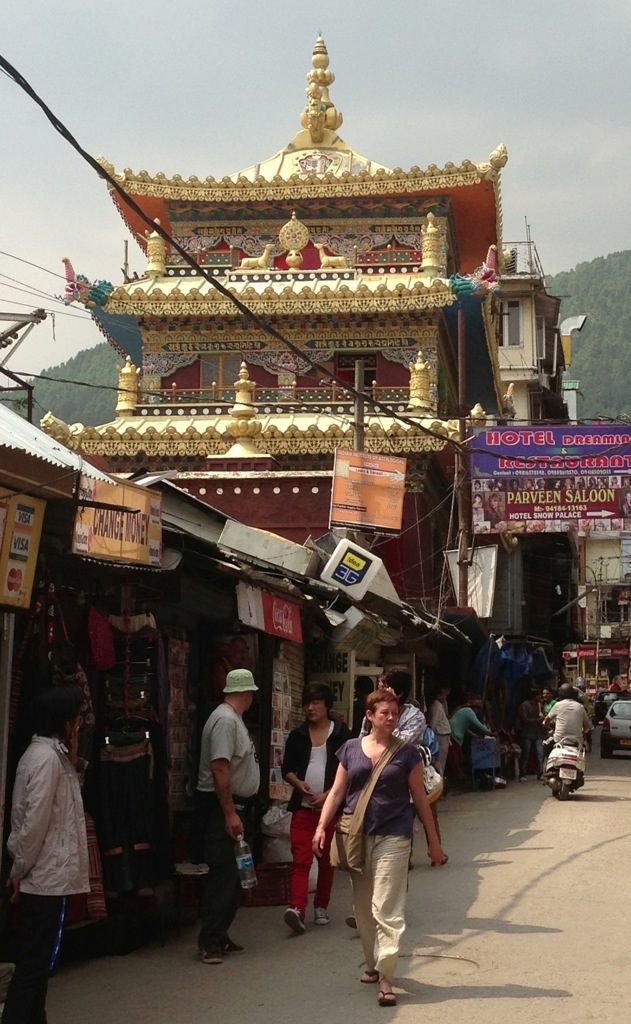 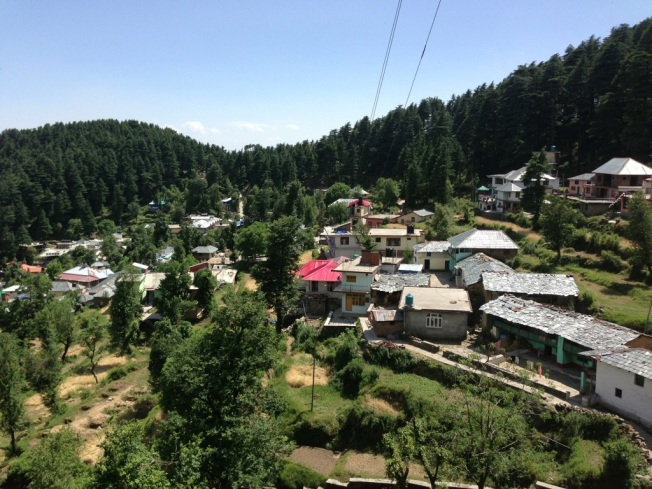 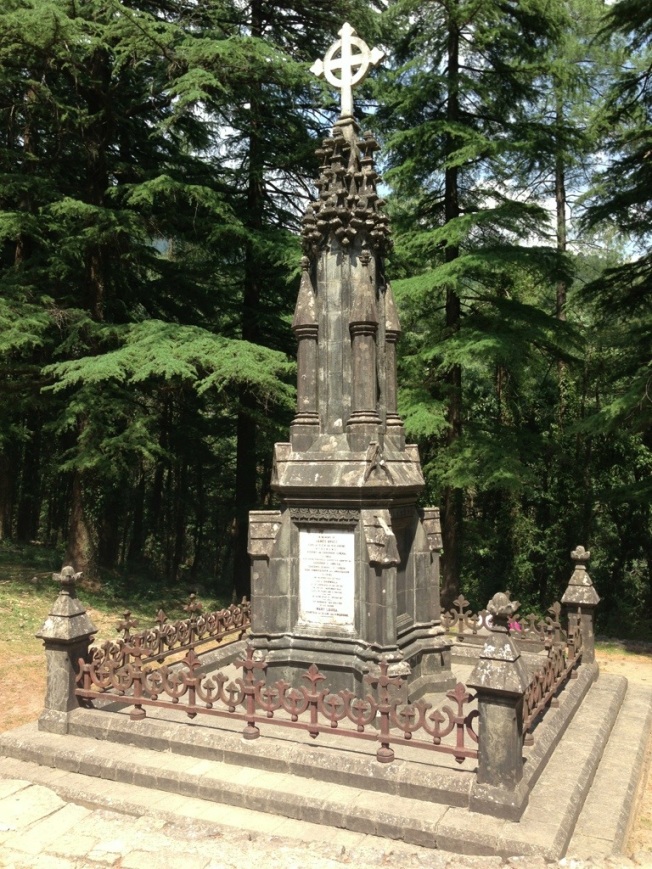 At McLeod Ganj, a suburb of Dharamsala, two narrow streets run uphill and parallel to each other with a narrow strip of shops, eateries and a temple separating them. At the top end is a junction of six roads including those sandwiching the temple. I found the Green hotel recommended by the big guides. It was full. I was relieved. Their prices are relatively high. But on request they pointed me to the Tashi Khangsar lodge opposite.
The daughter showed me a pokey single room but I asked for better windows. The double room with ‘en suite’ I was shown was what I wanted and had excellent views. At less than £4 a night and a good central position it was a gem of a room. With a little rearrangement and thorough spring cleaning I turned it into yet another ‘students room’. 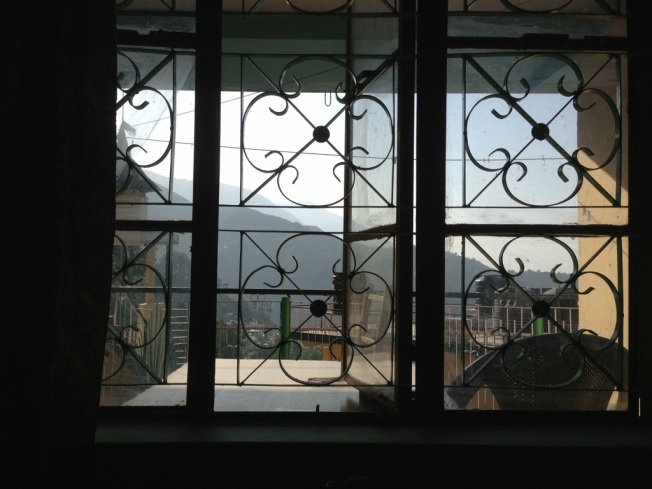 The next day I walked down to the departmental offices and library of the Tibetan Government in Exile. The canteen put on an excellent lunchtime buffet. 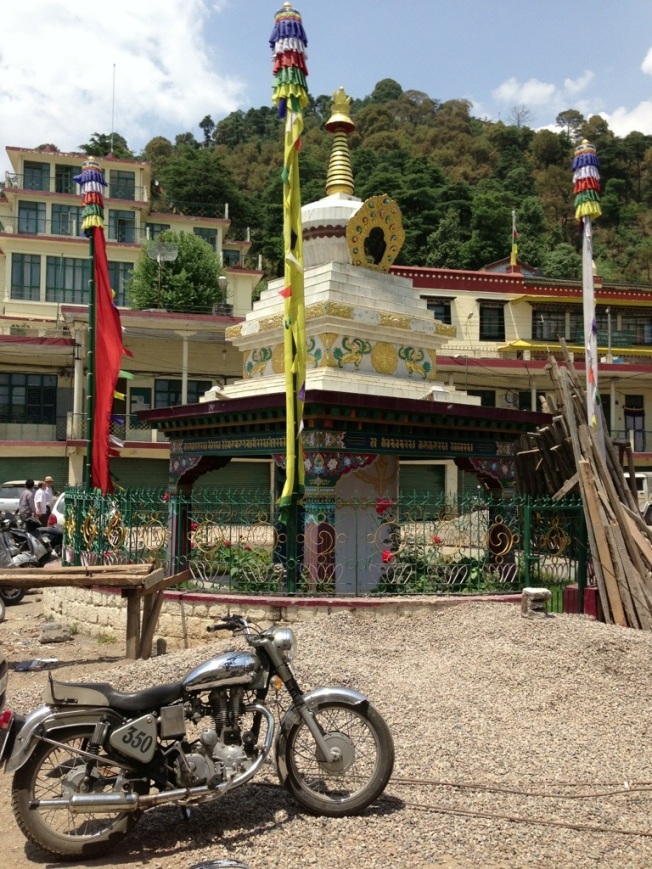 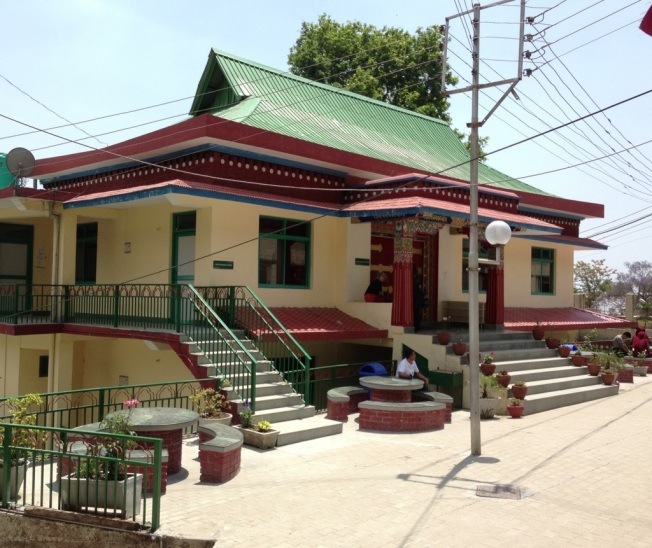 Back down at lower Dharamsala I picked up a knockoff Northface backpack, eggs and bells. I tried and failed to source kerosene on the road back up. I needed a permit to buy it from the government outlet.
McLeod Ganj provides, in addition to the town centre temple, a residence for Tensin Gyatso aka HH the Dalai Lama and a major buddhist temple. Next to this and almost opposite a museum of Tibetan artefacts is a monument for Tibetans lost in the struggle against Chinese occupation. 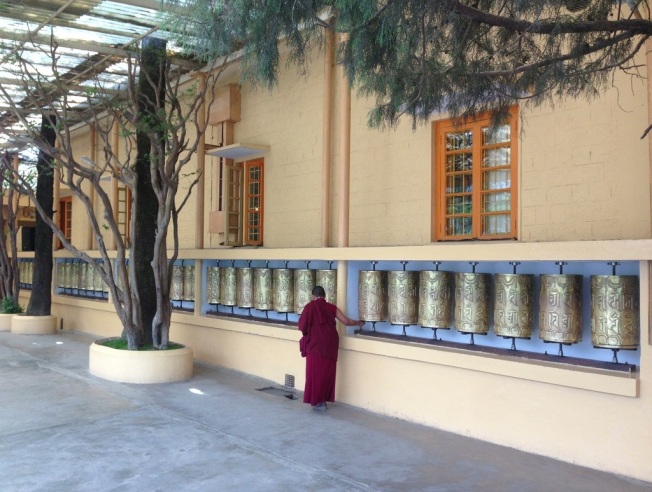 I revisited the Dalai Lamas temple early the next morning and saw the butter lamps being lit and people prostrating themselves. I returned via a route that passed above the Tibetan centre for advanced studies and which overlooks the plains below. 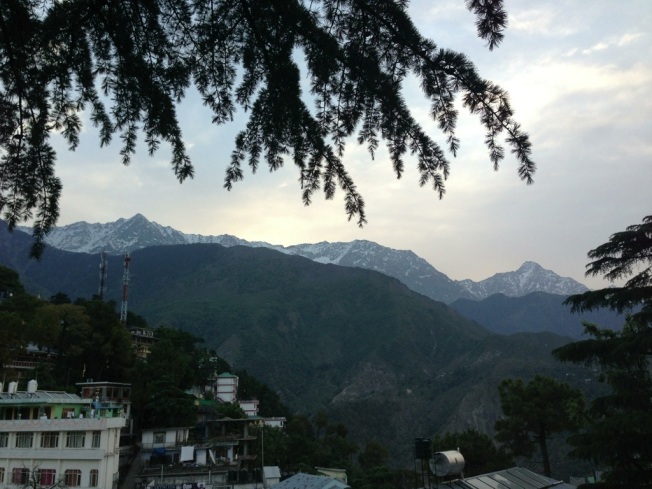 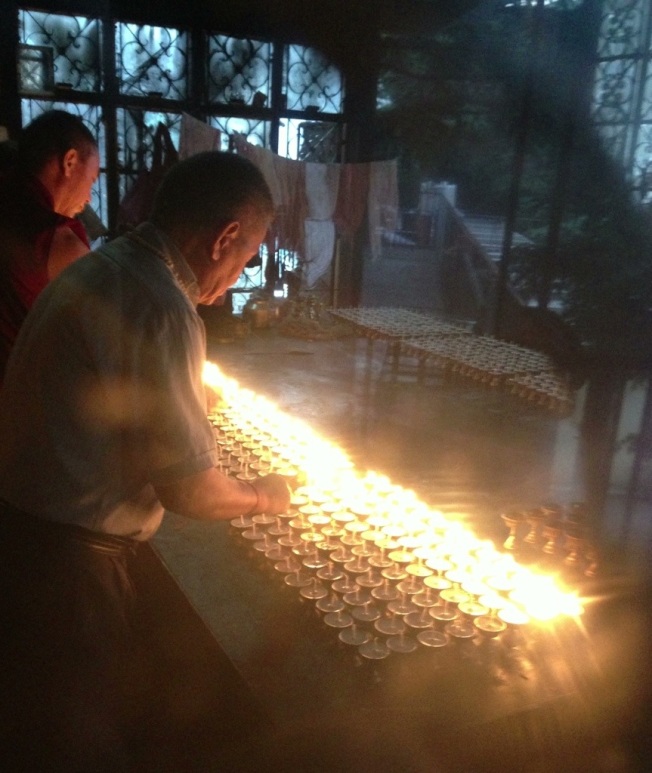 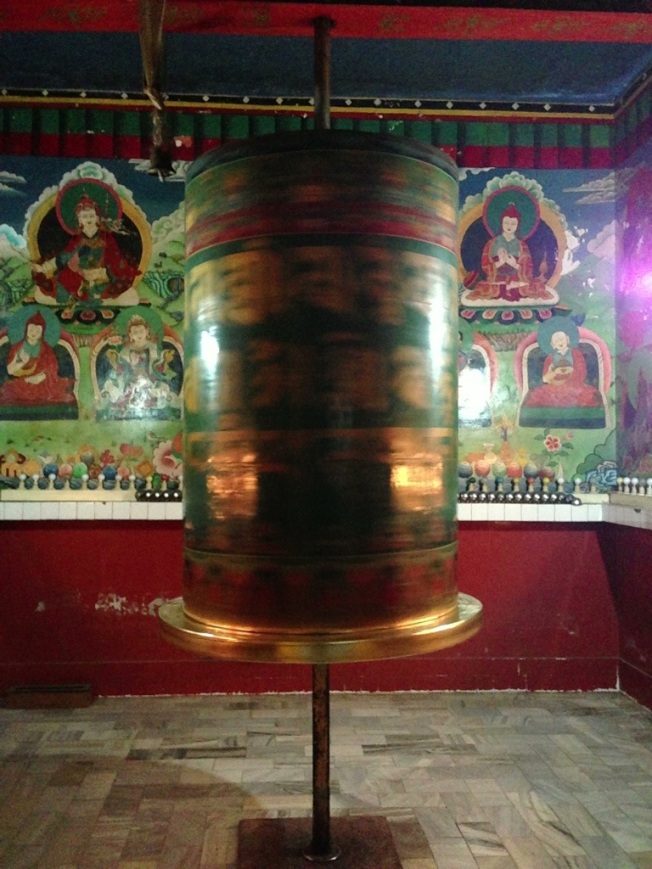 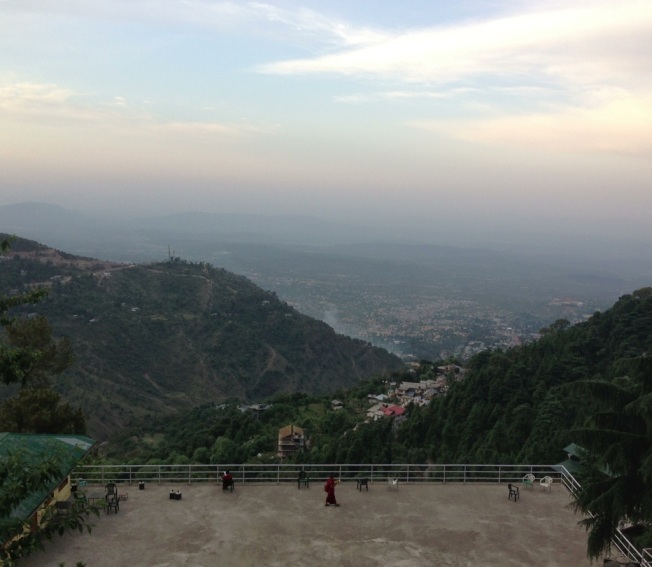 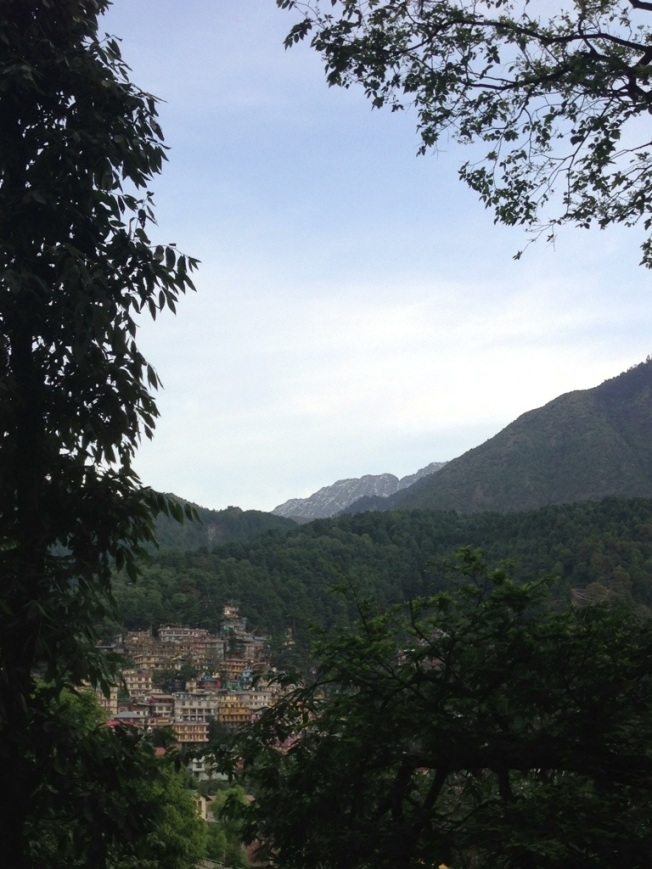 Back at the lodge I had the usual boiled eggs and fresh coffee but with the luxury of a local bakers brown bread. It was a good day and had hardly begun.