It has been sometime since I have used or updated this blog. Humble apologies to friends and colleagues that followed my touring adventures with interest. It remains an unfinished travelogue partially from laziness and partially from a personal indifference to processing my thoughts into words (must do better).

I did not finish detailing my bike ride from the Channel to The Mediterranean. Much was left in note form on my iPad. When I found the time to write those notes it was often very late after a long tiring day having cycled for up to 8 hours. Power was a major problem too. Electronic gadgets are great… and so very useful but without power they become a dead weight. I found that I had to write things up once I had returned home. I guess a pencil and notebook would have been handy on the road. But motivation to write is probably the most important factor and by the time I am back home I have already moved on.

This year (2012) I moved on to Scandinavia. I took my Dawes Galaxy on the ferry to the Hague and then cycled through North Holland into Germany. From there I found my way via Lubeck to Denmark. I hopped from the islands of Lolland, Langeland and Aero to the North West coast of Fyn. Then East via Odense to Vestsjaelland tracking along the North coast to the port of Helsingor. A quick ferry across to Sweden and up the West coast to Goteborg. Then back to the Northern tip of Jutland in Denmark cycling across to the West coast down to Esjberg. A brief trip back to the German border before taking the Esjberg ferry back to Harwich in the UK. All in all it took me the best part of a month during which I missed the entire Olympic games in London. The bike handled very well and the weather was a bit crap. The most memorable experience is attempting to cycle against a gale force wind South along the beach from Blokhus in Northern Jutland. I hope that I never, ever, have to do something like that again.

I tend to to do stuff rather than process or capture it for review. ‘Capture’ seems all the rage nowadays. I would argue,as a general observation, that people experience less of life now but observe so much more via media. Information has become a modern god that is worshipped at every opportunity. Life is increasingly experienced through a lens, TV, smartphone or computer etc. People have never been more connected with each other and yet more disconnected at a personal level. Reminds me of EM Forster’s short story; The Machine Stops in which people are reduced to observers with little capacity for humanity.  But on the other hand the liberation of communication for the masses  is pretty cool eh?

That said I do wish I had more records of my past experiences. So much gets lost with the passage of time. Life has been brilliant. From a rural upbringing, excellent schools, beautiful girls and wonderful family life; it has been a roller-coaster ride with few regrets.  I played in some cool bands, toured, recorded, met some great people along the way and had some amazing friends. After graduation and marriage I put my shoulder to the yoke of the NHS and then saw over 20 years of my life disappear in the blink of an eyelid.  My life, although less exciting as it once was, still remains an experience in the here and now. Having dropped a fairly subversive ‘rock n roll’ London lifestyle of my youth for family life in Cambridge I am now in the fortunate position to spend a little more time following my own path.

I have been busy planning a big trip to the Indian Subcontinent. 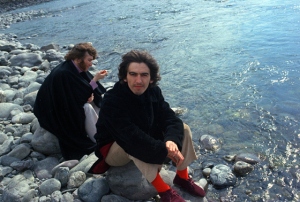