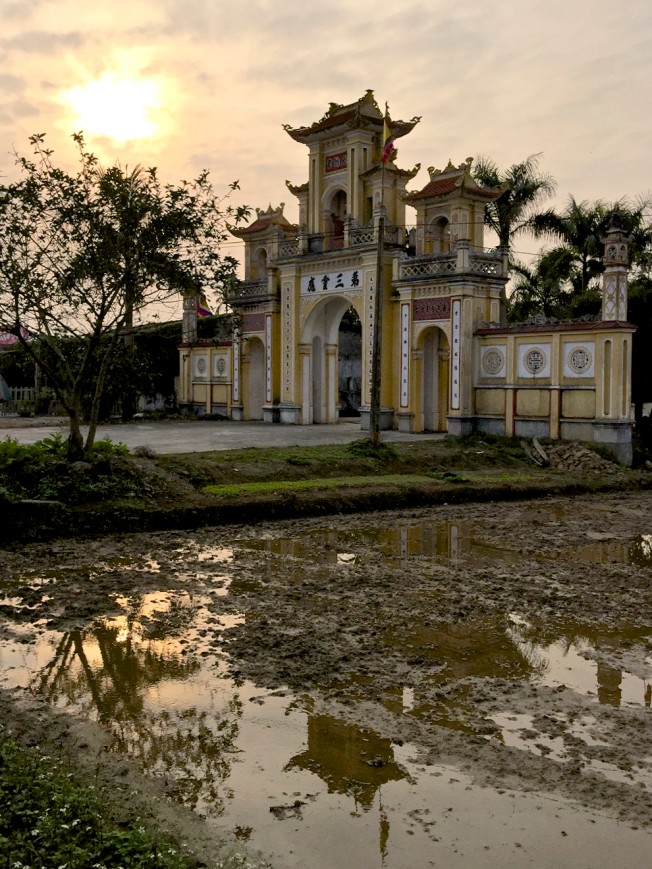 After all the excitement of visiting Cat Ba our attention was drawn West towards Thai Binh. We were now a good week into the trip and still only 100km from our starting point! Initially the roads were not too taxing. The traffic was light and the weather was fair. However we soon found ourselves cycling on busy main roads through the flatlands of the Red River Delta. There was little alternative but to get our heads down and eat up the miles.

Out of curiosity I stopped at the Buddhist temple of Đền Đức Vua by the river Diêm Hộ. A woman kindly unlocked and opened up the interior so that I could view the shrine. 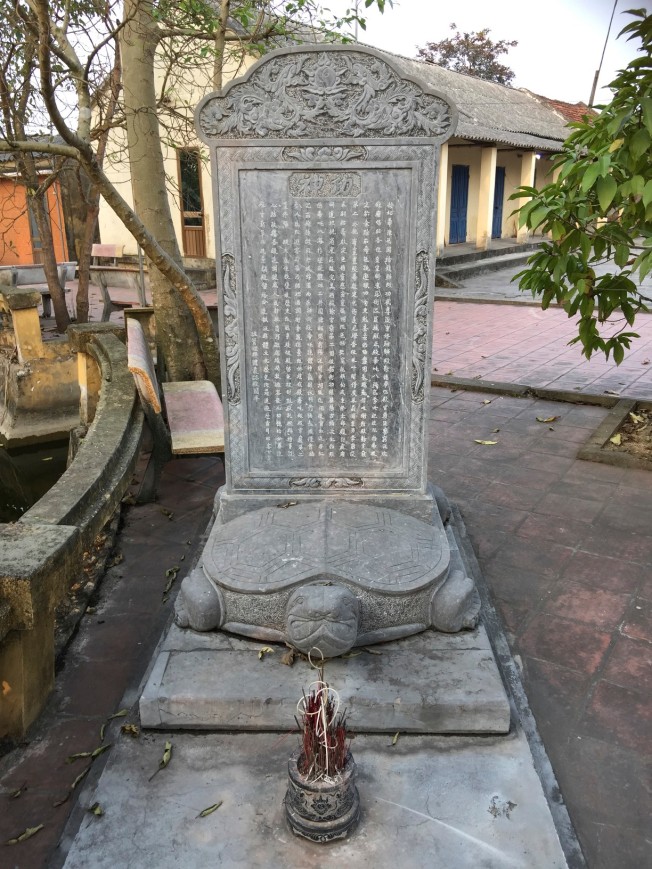 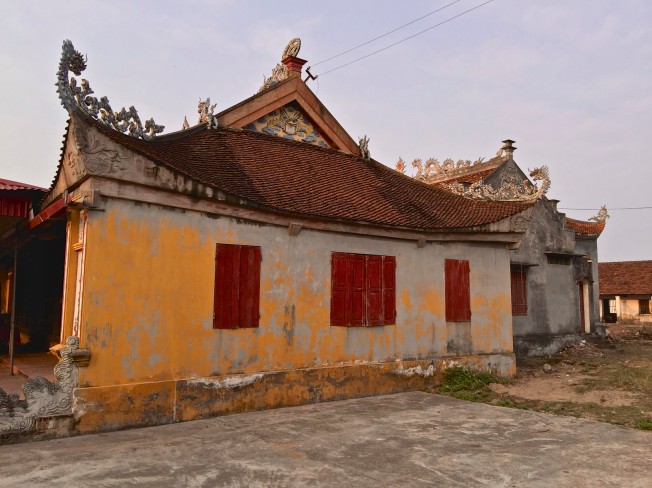 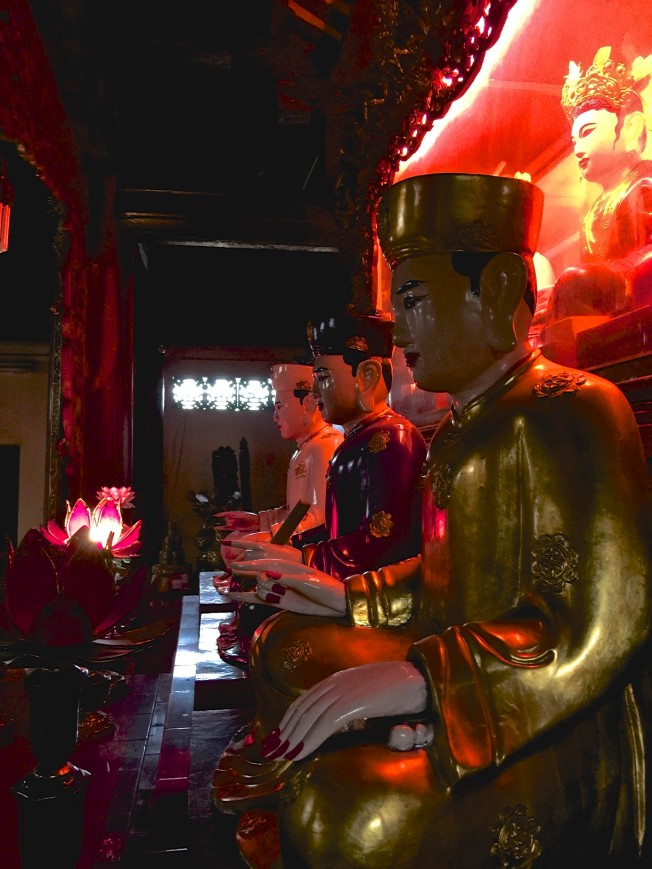 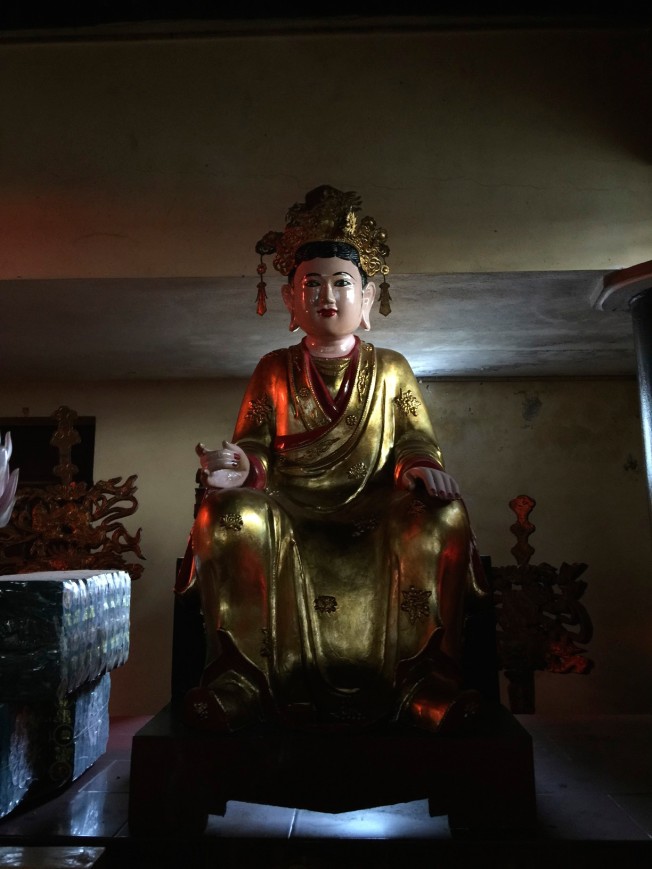 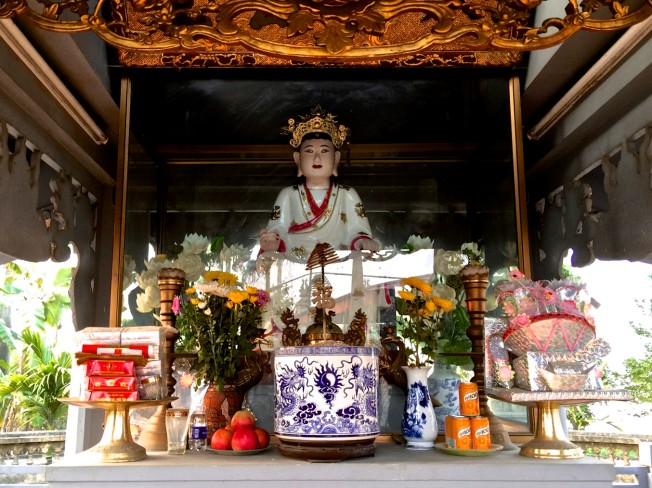 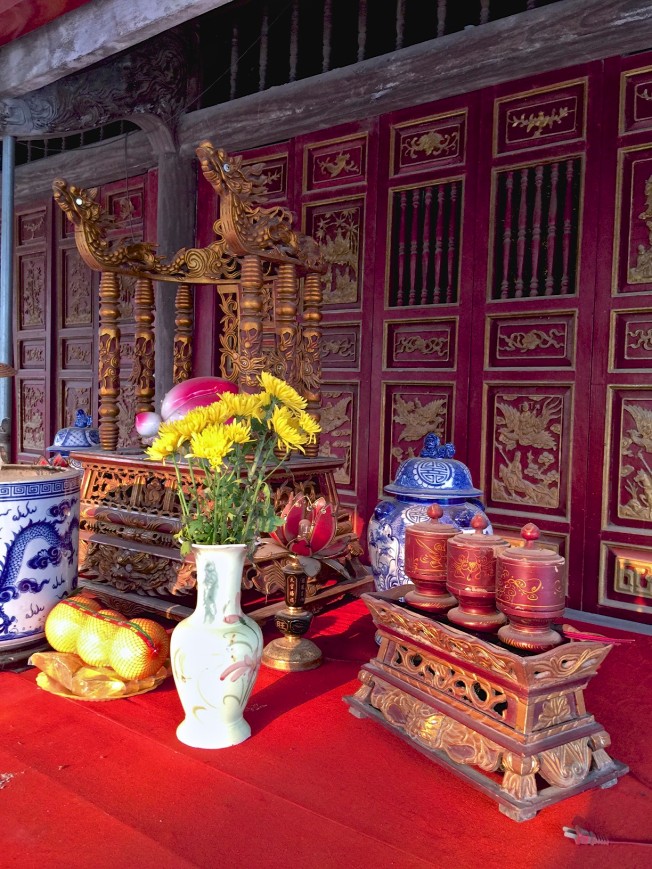 Moving at a different pace; Steve and I had  became separated but kept in contact via text. I tend to stop fairly often especially when the moment grabs me. Steve was well ahead but unknown to myself had lost his bearings. Google Maps is not always such a reliable friend. I tend to use ViewRanger. He was sent along some odd route that led him out into the sticks off the main roads. I reached Thai Binh expecting to find Steve. He had messaged me earlier to say he was already on the bridge over the river leading to the city. I was impressed by his speed! I tried hard to catch him up. But then he messaged me with the bad news.. He was still miles away and darkness was closing in. I suggested he simply stopped at the nearest hotel. I had seen quite a few on the way. But Steve was determined to keep going. I found a cheap hotel in a prominent place on the main highway in the centre of Thai Binh. I gave him the map coordinates and provided directions. It became dark and stood by the road side hoping to see him amongst the traffic.

It took a while but eventually Steve came into view. He was not a happy bunny! ‘Bloomin’ Google Maps!’ It was a hard lesson. He didn’t feel like eating much either despite a very good food stall across the street. He retired to the hotel room and an internet connection. All part of the adventure? Not really. I do not think he was having such a good time. I found myself plied with rice wine and food by some cheerful local guys across the road that insisted on buying before I finally hit the sack.

We stopped at the city of Nam Dinh the next day for lunch. The city proudly boasts of the Thiên Trường  sports stadium or ‘Theatre of Dreams’ which provides the venue for international football matches or olympic events. We ate chips. 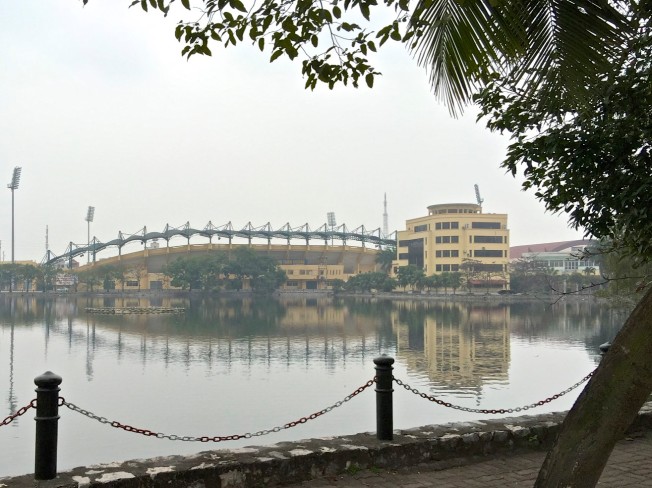 We continued West with the city of Ninh Binh in our sights. This time I cycled ahead stopping briefly to view some furniture workshops. But, and having stopped to have coffee and waited for Steve to catch up, we finally arrived together in Ninh Binh without too much trouble. We checked into the Lonely Planet recommended and somewhat plush, high rise Thanh Thuy hotel in the old district. 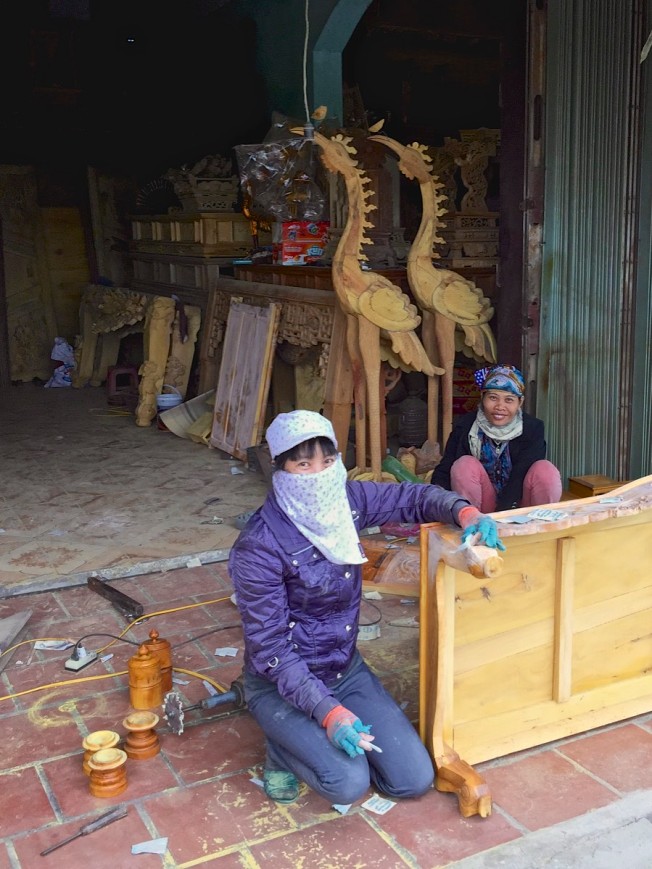 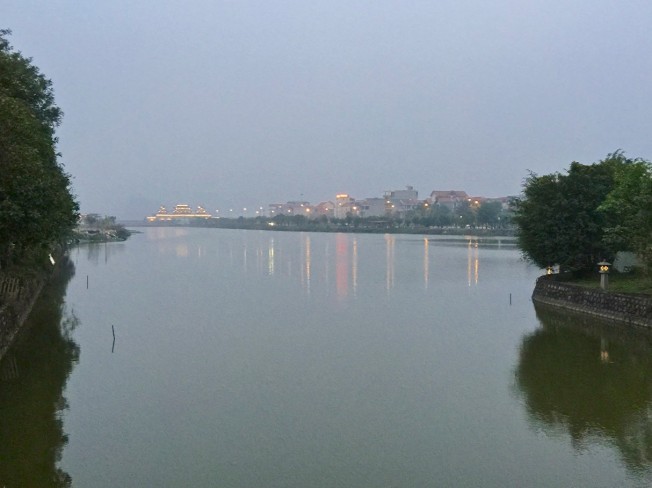 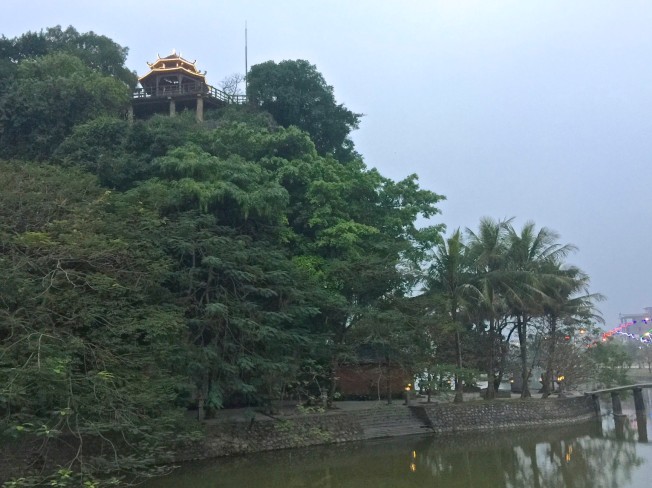 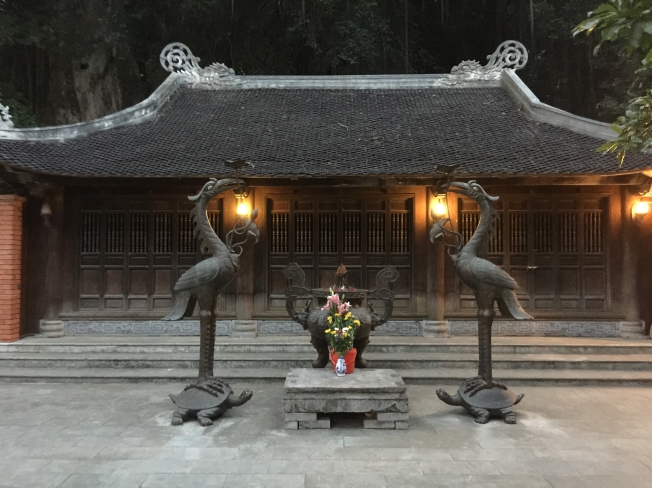 Ninh Bình is a very modern and busy commercial city. I cannot say I found it particularly charming. We were staying in the old town which has an interesting network of smaller streets. But it was nothing much to write home about.  They were simply avenues between the busy neon lit main roads filled with high street shops. That evening I circled the city on my bike past the Western gate with its elephant statues and then returned via the Tràng An road alongside Núi Kỳ Lân lake. At the city end is a little island with a buddhist shrine. It is set against rock part of which is split creating a little passageway to walk though. Perched on the rock above is another temple building which looks out over the city. With the night drawing in I regrettably did not have time to climb up.

As a busy modern crossroads Ninh Bình is viewed as a stepping stone to the sights beyonds the city boundaries. According to Wikitravel; ‘There is nothing to do in Ninh Binh itself aside from drinking with the locals..’ Steve and I set out that evening to find a beer or two in the streets alongside the hotel. We drew a blank! I guess it was getting late. But it was fun looking.

It was supposed to be an overnight visit but then the weather changed. The heavens opened up and some of the main roads became flooded. It  was wet on a big scale. We were well and truly grounded. 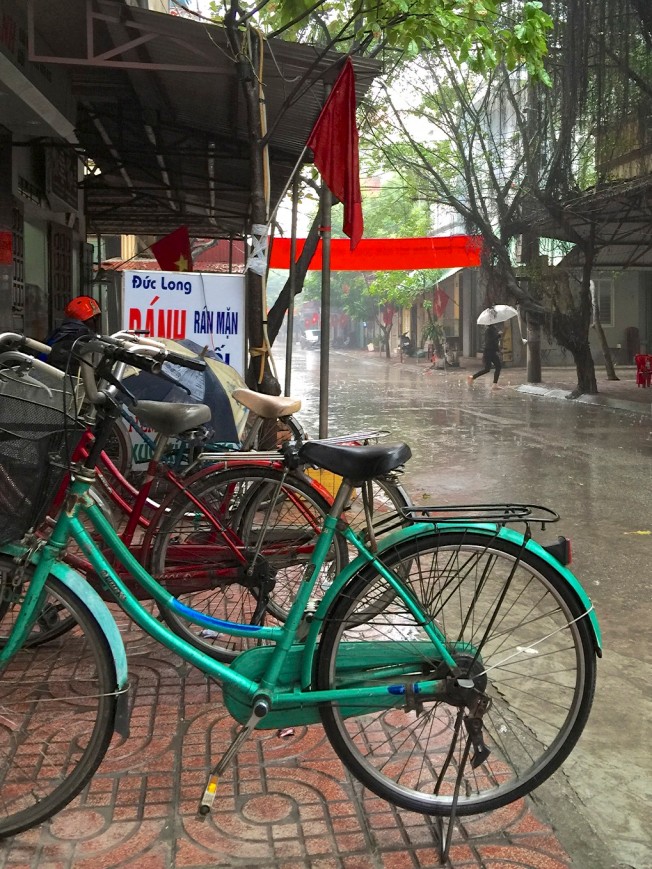 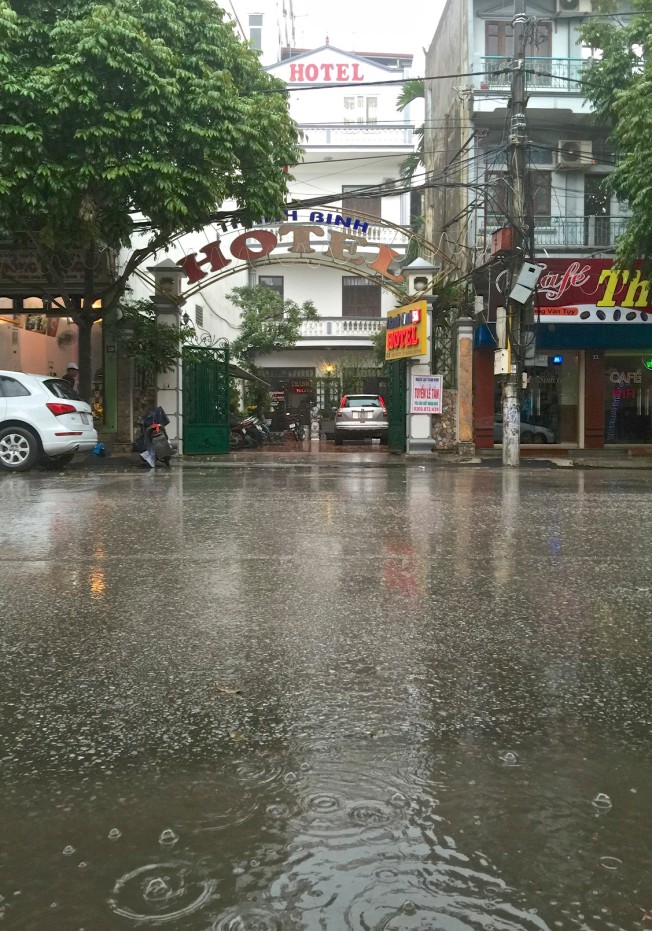 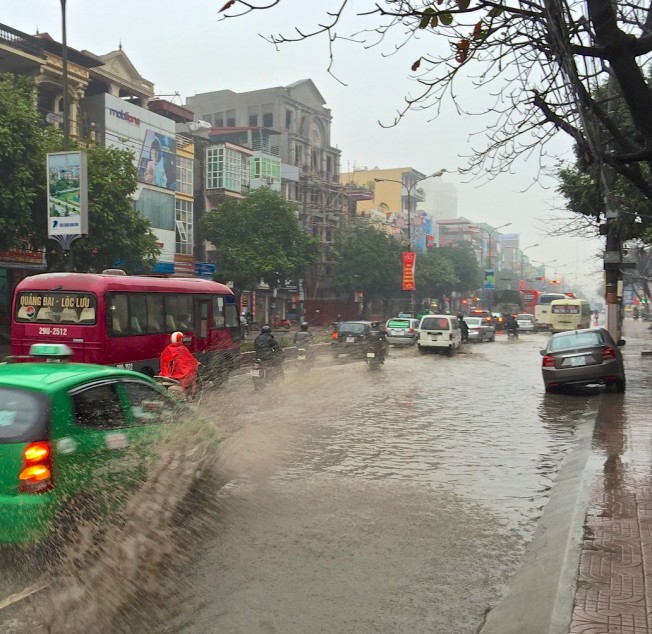 Sadly at this point Steve felt that things were just not going as well as he had hoped. Maybe a little over ambitious with regard the timescale to physically cycle the length of Vietnam, this latest delay on top of what had been a fairly taxing ride was the needle that broke the proverbial camels back. His wife; always the tower of strength, supported his efforts to find a suitable solution to his dilemma.The train appeared to be the best option. We visited the station with a view to getting him and his bike on a train down South. It wasn’t that easy to organise. But the hotel was able to book him on a ‘luxury’ coach. However this involved leaving the bicycle. This was a little heart wrenching as it was his ‘baby’ and had spent a lot of time and emotional investment in building it. Thankfully he was able to sell it for a good price to the daughter of the hotel owner which cushioned the loss somewhat.. Less of an end to his cycling trip it was to be the beginning of another chapter to his adventures in Viet Nam. A few days wait and a relaxed coach trip carried him along the coast towards Hue and Hoi An. From there another trip into the highlands and Da Lat provided a brand new bicycle with which to ride down into Ho Chi Minh City. He did it! He had beaten bowel cancer, undergone chemotherapy, built himself a bike and realised his dream to cycle tour overseas.

Great stuff. It was an honour… 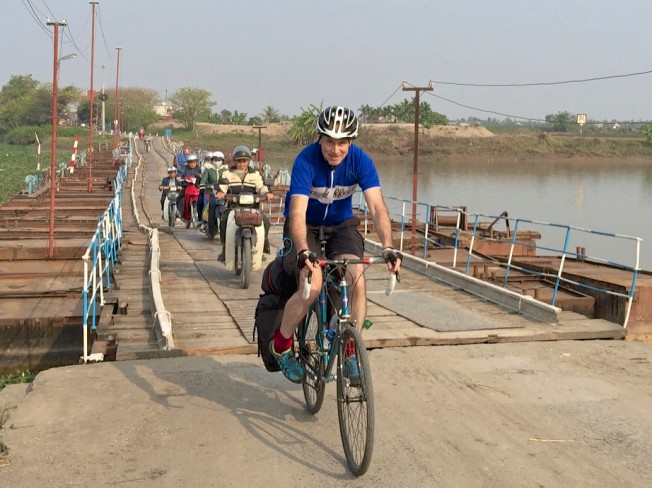 ‘Neither of us knew it at this point but, after a few days relaxing in luxury by the pool at Hoi An Paradise Hotel and belting around on their hotel bikes, I hatched a bold plan to buy a bike at Da Lat to finish the journey!

I may not have had the capacity to show it at the time but you were a tower of strength for me, too, buddy. For me, seeing your pics as you went inland doubled my trip and inspired me to finish by bicycle.
So thanks for suggesting we meet in Vietnam, for putting up with my newby’s culture shock and for understanding when I needed to go my way. Most of all, thanks for reminding me that it’s all only stuff and it’s all part of the adventure.’
July 2015