Finally, and after failing to find a spot to camp on the coast, I cycled into the city of Salé. The city is situated on the Northern bank of the Bou Regreg river opposite Rabat. Although overshadowed now by the capital, Salé is the oldest city on the Atlantic coast. Its Phoenician origins date back to the 7th Century and was a prized city under the great Moroccan Sultans. It shares many of the same characteristics as Fes or Meknes including a finely decorated Medersa. The city enjoyed further wealth and success during the 16th Century as a home for the successful Sallee Rovers pirates. The  occupying French force made Rabat the administrative capital of Morocco in 1913 and Salé became a residential suburb. Despite its proximity to Rabat, Salé has retained its timeless atmosphere and traditional way of life. I was keen to find a place to stay and spend a day or so getting to know this historically important city. The Medina is tightly packed with tiny passageways. With some difficulty I steered my bike through the busy markets and searched for a hostel or Riad. Salé does not figure in too many travellers itineraries over and above a day visit. I searched for the only Riad listed in my guidebooks. I spent a lot of time looking for it in the maze of passageways as the light began to fail. Eventually I found ‘La Repose’, knocked on the door, and was led to a comfortable lounge by a maid.  I was presented with a glass of water and told to wait for ‘madam’. The hotel, which consists of a converted Medina house, looked quite spectacular with an exotic interior. A French family sat eating a dinner nearby. I quickly realised that this place was a boutique ‘Moroccan experience’ hotel of some luxury. Having just cycled around 80 miles I felt and must have looked pretty rough. My dusty bike stood, totally out of place, inside the grand front door. I  knew instinctively this wasn’t going to work out. I felt like a large turd on someones favourite lace tablecloth. ‘Madame’ appeared in traditional Moroccan attire including hijab and sat down.. It turned out that she was, in fact English and very well spoken. She told me that there was no rooms available and could not suggest anything. And that was that. I complemented her on the hotel and pushed my bike back out into Salé’s Medina.. 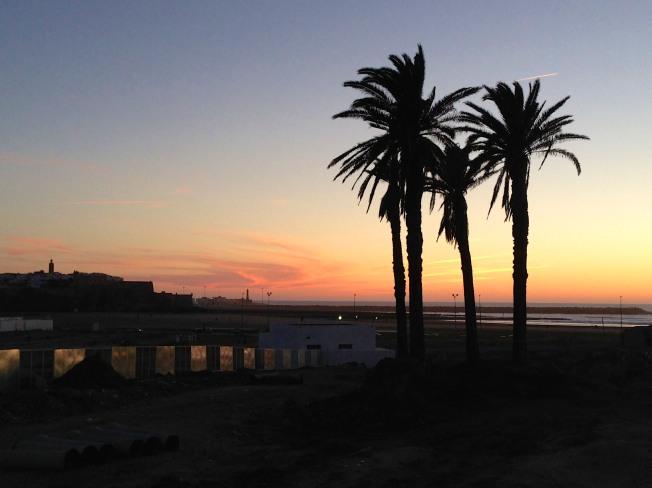 It seems I had exhausted all possibilities of finding somewhere to stay in Salé. The next port of call would be Rabat. There are oodles of places detailed in the guidebooks for Rabat. I found my way over along the cycleway over Pont Hassan II bridge and found Avenue Hassan II which runs next to the Almohad wall of the Medina. Many hotels are grouped close to the Bab Bouba gate. I began my search for somewhere to sleep all over again. It was turning into one helluvah day. In fact it was a Saturday. The weekends are busy in Rabat.  I began working my way down the list of recommended hotels in both the Rough Guide and Lonely Planet. They were full. I was sent to other hotels by these hotels. They were full. I did find one at the lowest end of the scale but looked only marginally better than sleeping on the streets. My last option was to find the Riad Dar Aida where I had stayed on arrival at the beginning of my trip. I had already pre-booked a room there for my final night in Rabat. At around 11pm I was welcomed into the Riad by Majid who manages the place. He had a room for me! Brilliant. I stayed there for the rest of my stay in Rabat and although a little pricey it was a very welcome ‘splurge’ that provided both comfort and good amenities. And good wifi too. Time to recover, refresh and relax. Arriving back two days earlier than anticipated meant that I was able to enjoy a ‘mini’ holiday before returning back to the UK. 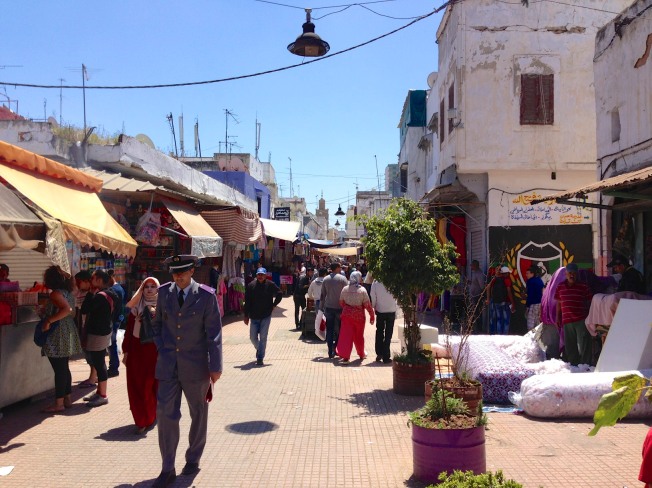 I would guess that my arrival in Rabat truly represented the end of my cycling tour of Morocco. All that was left was to dispose of unwanted gear, buy an oversize ‘chinese’ laundry bag for the flight and cycle to Rabat-Salé airport. The hotel manager told me that the ‘patron’ or owner does not welcome guests with bicycles or pets. However he would store my bike for the duration of my stay. This had the unfortunate consequence of leaving me on foot for my stay in Rabat and limited my usual range of exploration. I walked and walked and became a regular tourist. 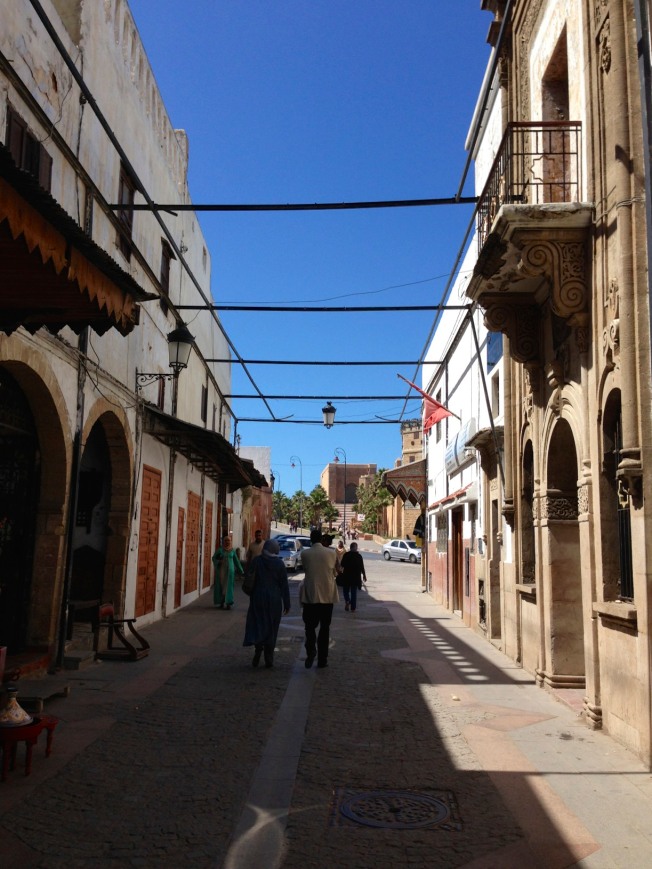 I returned to the Kasbah des Ouidaias and the Baba Ouidaia gate, where I had originally taken shelter from the rain on arrival in Morocco.  The fortified citadel contains a monastery and its 11th Century mosque is the oldest in the city. There is a viewing platform and beach access from the walls closest to the sea but several young men blocked the road and said that it was for residents only. I gathered later that it is public access and should have ignored these mischievous people but at the time I turned back.

I made my way along the quay by the Bou Regreg. Rowing boats ferry passengers to Salé on the opposite shore.  Once past a sailing ship converted for use as a restaurant I walked up hill towards the Hassan mosque and Mohammed V mausoleum. 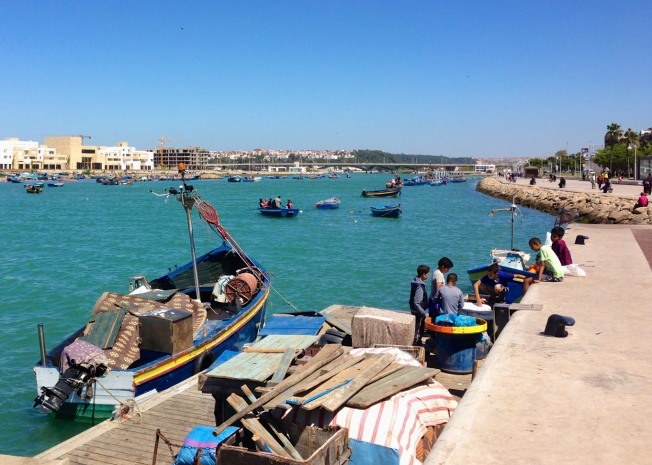 The Hassan mosque was an  overambitious project that was begun in the late 12th Century by the Almohad Sultan Yacoub el Mansour. Its construction slowed even further after his death but then was partially destroyed by the Great Earthquake of 1755. Its minaret still dominates Rabat’s skyline. Behind lies the Mausoleum of King Mohammed V whose body was interred there following his death in 1961.The park next to the Minaret is a popular place for skateboarding.

After dinner I took a walk through the Sidi Al Khattab (Martyrs’ cemetery) that extends from the Medina down towards Rabat’s 1920s built lighthouse. The headstones all face Mecca. I sat on the rocks by the sea watching the sunset.  On the road back I saw a lad throwing quite a large rock which hit a parked bus. A man jumped off the bus and ran towards him. People scattered as he too threw a large rock and which narrowly missed the first mans head. There then followed a chase as this second man turned and ran uphill.  A large gang of men ran after him. It seems they had been playing football and had some issue with the man on the bus. I did not fancy his chances against the mob after his blood. It seemed like a serious business given that if any of the rocks thrown had struck home they would have caused injury or death..