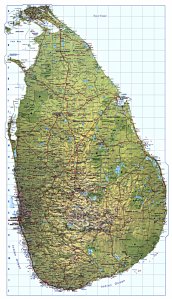 Trawling through a travellers bookshop in Long Acre, Covent Garden revealed very little in the way of detailed maps for my journey. The most interesting find was a series of plain and well created trekking maps for the Himalayas; quite expensive but exquisitely detailed. I opted for three general road maps of Sri Lanka, North India and Nepal which provided enough information to at least confirm where the hell I was in relation to the bigger picture. But finding more detailed maps suitable for cycle touring in India and Sri Lanka is nigh on impossible. Much of the truly detailed mapping was undertaken by officially sanctioned government surveys in the immediate post war (WW) period. These are available at specialised bookshops in the respective capitals.

My search of the web revealed a fair amount of useful maps. In particular the forums at http://www.lakdasun.org/ run by Sri Lanka ecologists provides some excellent links. From there I found a current and well detailed road map of the Island. The administrators also provided me with detailed survey maps but I actually found them too large and unindexed for practical use.

In terms of kit I will be using my iPhone as a mapping/GPS unit. I checked out a number of GPS apps specifically aimed at travellers and sports people. Initially I trialled GPS Motion X app and which I found pretty good with an excellent interface and enough features to keep a herd of nerds happy. These apps synchronise with websites set up for people to map and share their activities. They are great for planning trips and provide all the possible information that you could want including timing, altitude and directional waypoints.

My specific requirements for cycle touring are maps, routes and directional aids including compass. The main problem I encountered was availability and storage of maps for off line use. The main digital map providers; i.e. Bing (Microsoft), Google do not allow their maps to be stored. It would appear that OpenStreetMaps and OpenCycleMaps are the source for off line maps.These maps are as the name suggests open source and are created and updated by public users everywhere. They are actually pretty good and show a lot of detail including altitude markers. But.. and this is a big but.. they are incomplete and somewhat poor in comparison to those provided by the big guns in the business. There are few place names or detailed roads. However used together with route planning and markers the OpenCycleMaps are adequate.

Having downloaded huge quantities of maps for that first app I discovered the ViewRanger app for the iPhone and which by coincidence has been created and promoted within a few miles of my home in Cambridge.

Now this GPS app is what I needed. It is intuitive and provides most of the features of its competitors with a lot less fuss. I have been able to import route files (gpx) into the app on my iPhone. These appear as routes on the off line maps which I have downloaded as an extensive series of OpenCycleMap tiles covering all the areas I may visit. Moreover by using the ViewRanger website I can create detailed routes and upload those via ‘synchronisation’ with my Phone app.  If using the live tracking GPS on the move it is then easy to transfer and convert those tracks afterwards into routes which can be used by others via the sharing system provided on the ViewRanger website.

Awesome.  I now have maps and routes detailed on my iPhone covering all the areas I plan to visit and am able to navigate via the GPS provided by the ViewRanger app. Of course I will still be carrying printed maps as a backup and for everyday use. Power for my iPhone is another issue and it is cool to see that the ViewRanger app provides for a power saving mode which means that the device does not constantly seek a GPS location.